Every bull market has minor corrections, like the 7% one in May 2019 and the 6% one a few months later in August, but a real 15%–20% drop over the course of the past 10 years has come with a rise above 3% in the 10-year U.S. Treasury Bond (UST) yield and the perception of a tightening Fed.

The “mini-recession” bear markets of 2011 and 2018 were preceded by a sustainable rise in the 10-year UST from under 1.5% to 3% due to a better economic outlook and potential inflationary pressures. The Fed has made it crystal clear it will not be raising rates until core inflation is meaningfully above its 2% target regardless of the economic outlook. This means growth can reaccelerate and remain strong without fear of tighter monetary policy for the foreseeable future. 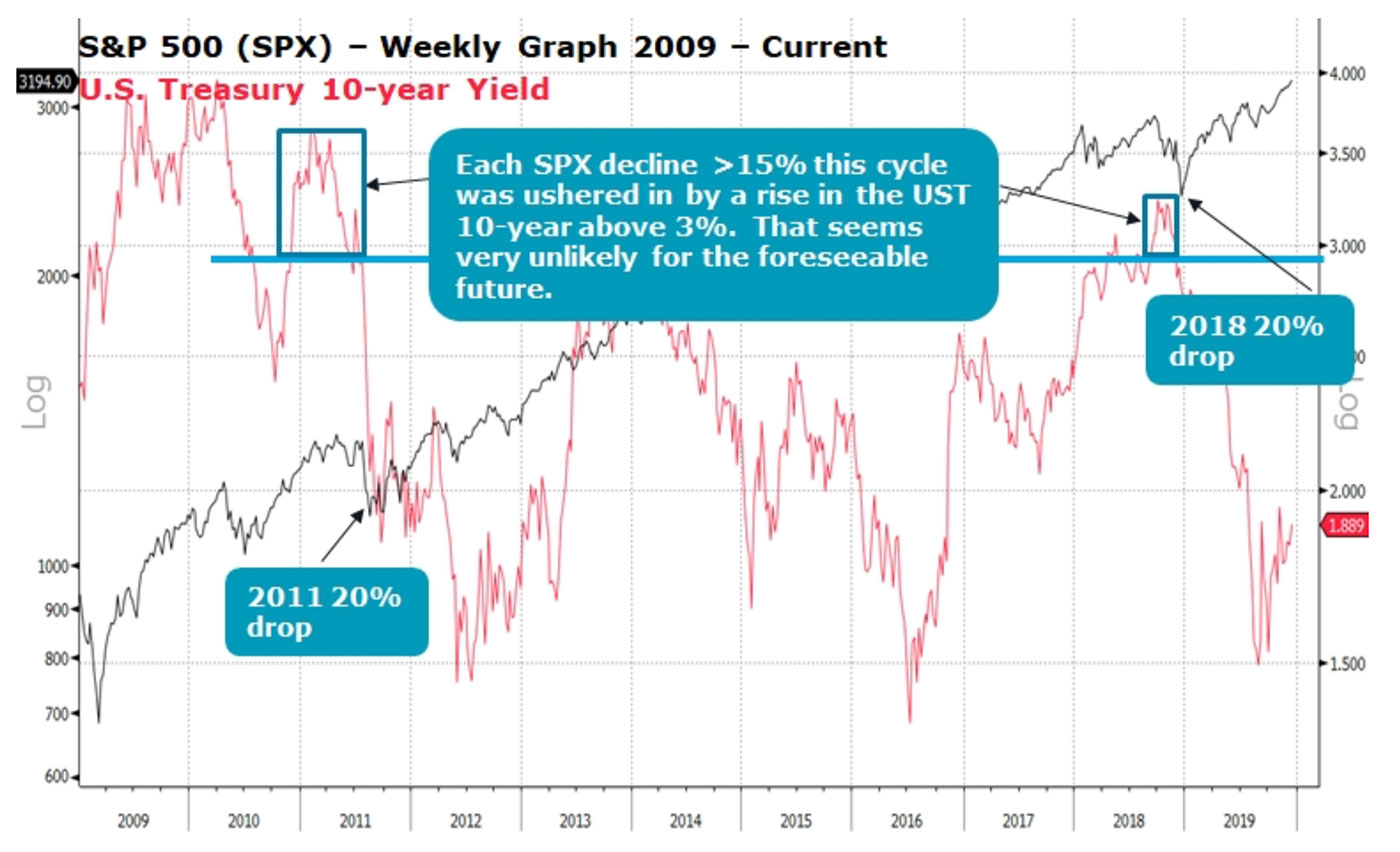 Identifying the main risk to the market

The generational shift in how the Fed fears low inflation rather than high inflation brings with it a new risk: What if we end up like Europe, where easier monetary policy and historically low market rates do not have the desired effect of stimulating economic growth?

Many economists use the phrase “pushing on a string” to qualify this idea, and we have heard the phrase every time the Fed has embarked on an easing cycle. Yet ultimately, the lower rates have their desired effect. One sign the most recent drop in the 10-year UST to below 1.5% (and three Fed rate cuts) helped kick-start a reacceleration comes from the housing data.

The National Association of Homebuilders (NAHB) housing survey, designed to take the pulse of the single-family housing market, showed a clear sign lower rates are having their impact. The monthly survey came in at a 20-year high of 76 (scale of 0–100), and according to our friend Ivy Zelman of Zelman Associates, showed the strongest month-over-month improvement since 2013 (Figure 2). Strength in the data was broad with the current single-family home sales, expected sales, and traffic indexes reaching 20-year highs. 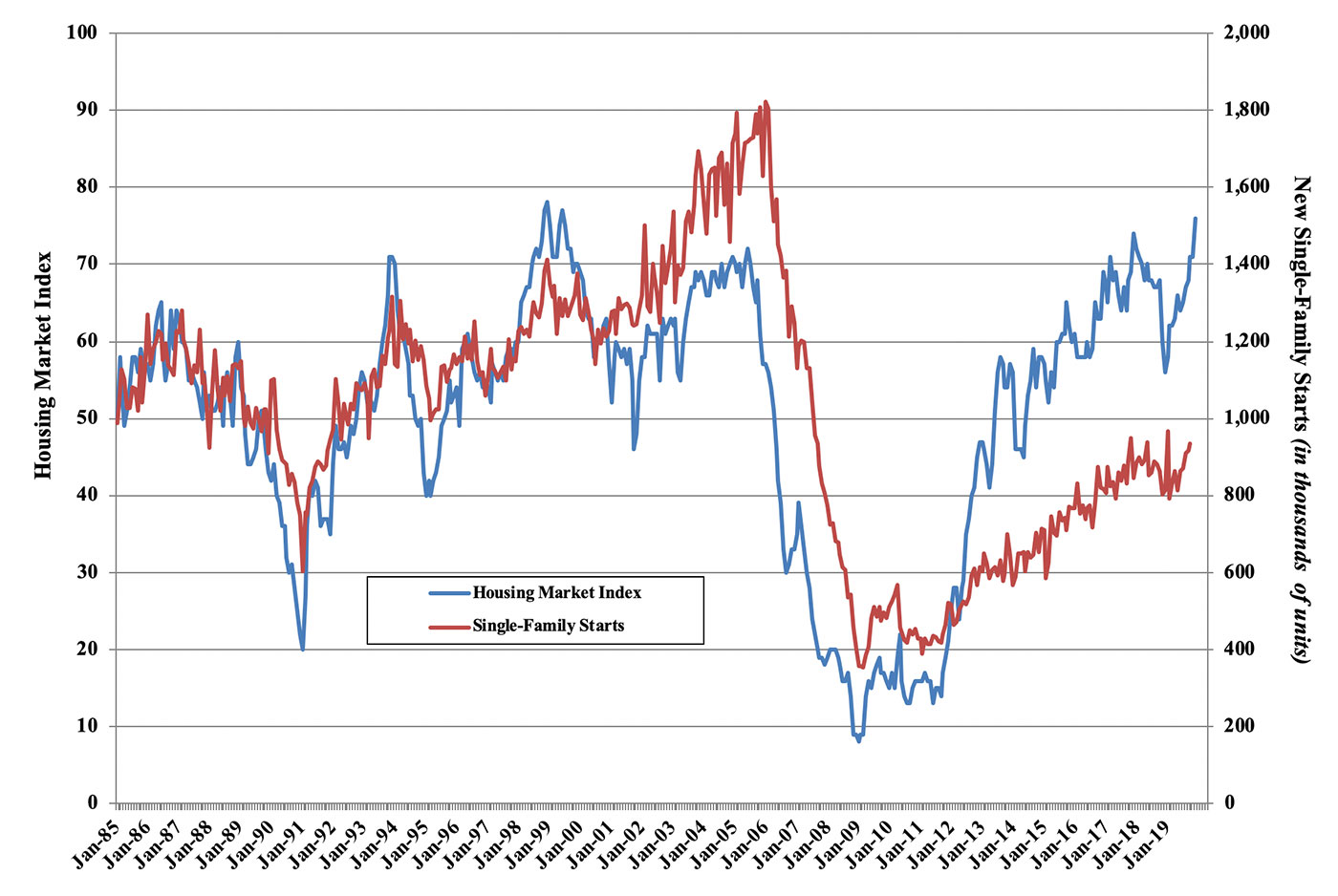 The bull story for 2020 is economic reacceleration

The generational change in how the Fed views inflation has been made clear by Fed Chair Powell, who literally told us the Fed is going to remain on the sidelines for the foreseeable future, which gives us an offensive playbook. The Fed has clearly stated it is keeping rates low until there is a meaningful ramp in inflation versus a fear of one. The main risk is if the lower rates don’t feed through to the economy; but, the evidence in the housing market argues the reacceleration driven by lower rates has already begun.

As a result, we believe any market weakness should prove limited and temporary (less than 5%) and provide a more attractive entry point for a move toward our new 2020 target of 3,440, led by the more offensive sectors.

This is an edited version of an article first released by Canaccord Genuity on Dec. 17, 2019.

In the eye of the storm? How advisors and clients are handling uncertainty

The COVID-19 pandemic has significantly impacted financial advisors, their clients, and prospective clients—not only in their response to volatile markets and adoption of remote communications but also in the fundamental demand for financial-planning services.[dropcap...

From Aristotle to active investment management

Active investment management is consistent with the tenets of behavioral finance, as well as with sound financial planning that seeks to help investors reach their long-term objectives.Over 2,500 years ago, in what may have been one of the earliest examples of...

Is the market’s bullish sentiment overdone?

An article by analyst Mark Hulbert at MarketWatch last week said that market timers are “more bullish than at almost any other time since such data began being collected in 2000.” According to Hulbert, this contrarian signal has usually led to struggles for the stock...

When a broker-dealer’s philosophy aligns with advisor objectives