Among the primary missions of the Lowry Analysis is to help investors avoid the worst of bear markets while making the most of bull markets. As it relates to the latter, Lowry’s Average Power Rating (APR) Index is a valuable tool in confirming whether a new bull market is underway and in identifying the continuation of a preexisting longer-term uptrend.

The reason the APR Index is so pragmatic is that it acts as a gauge at the intersection of market breadth and demand intensity. Both factors are crucially important determinants of an advance’s sustainability. Where Lowry’s Power Rating reflects the present relative strength of each issue, the APR Index is the average power rating of all stocks in Lowry’s database (currently 3,550).

Demand powerful enough to propel the Lowry universe of stocks is worth monitoring closely. This study comes at a time when investors are attempting to determine whether the next stage of the recovery off the March 23, 2020, market bottom has begun or is destined to reverse.

Since the advent of Lowry’s APR Index in 1949, robust gains in the APR Index that endure two or more consecutive weeks preceded positive returns in the S&P 500 Index on multiple time frames with high degrees of consistency. The latest instance was recorded last month and clarifies the market’s most likely course.

From the time of the completion of the identified APR Index thrusts, on average, the S&P 500 Index climbed 12.51% six months later and 20.26% after 12 months (see summary statistics in Table 1.) There have been 33 observations since 1949, with the most recent occurring off the late September 2020 market low (see Table 2.)

Although these signals do not correspond with precise lows, it is worth recognizing that it is the force of these APR Index gains that led to further price index gains on a longer time horizon. This indication is conceptually aligned with Lowry’s philosophy of waiting for the market to demonstrate the return of strong demand before aggressively adding equity exposure in the wake of market corrections. 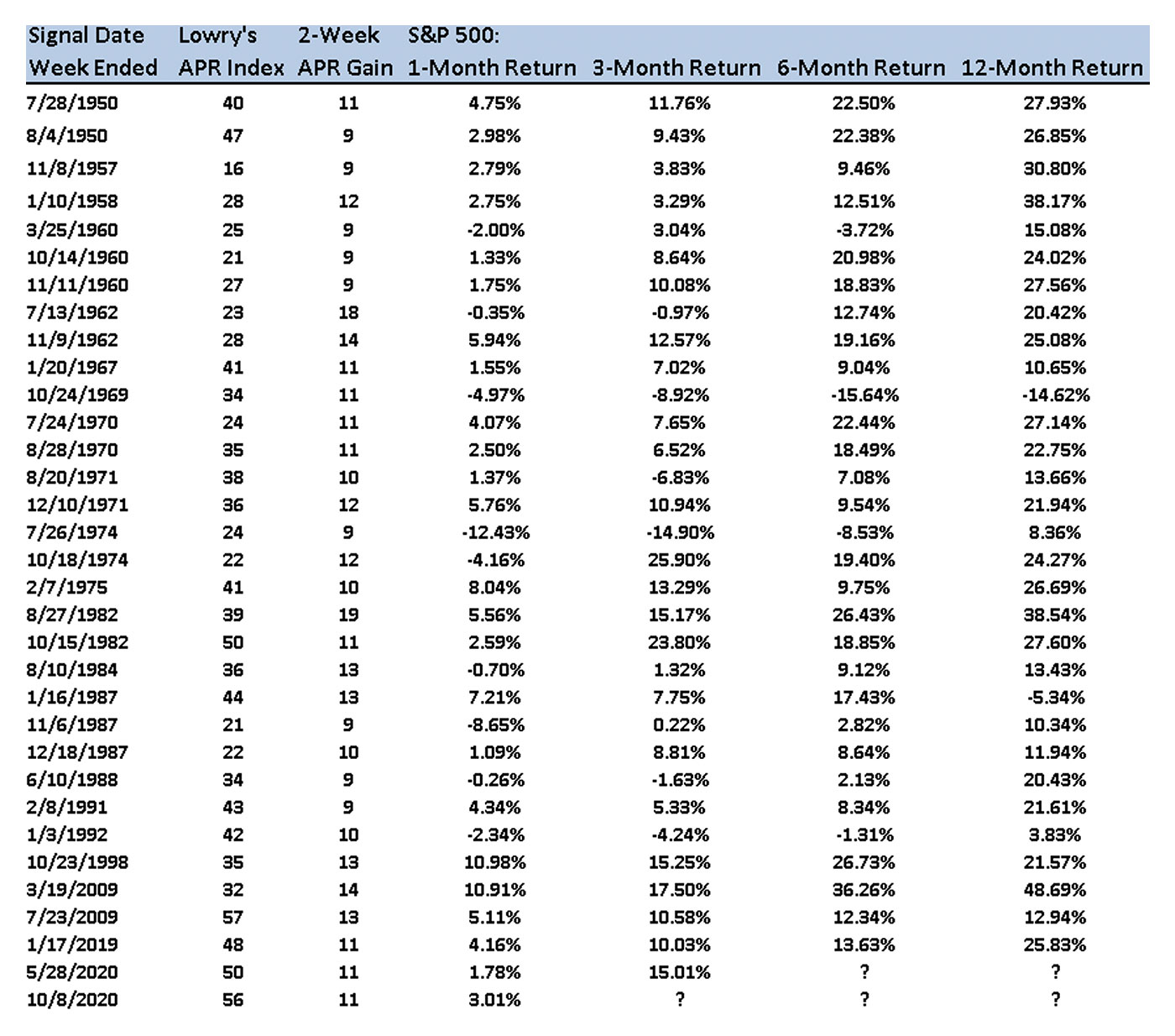 After examining the data in Tables 1 and 2, there are several key takeaways as it relates to subsequent stock index performance.

The first point is that nearly all instances (94%) identified market entry points that produced positive 12-month returns. This figure is what the statistical summary refers to as the “win rate.” Further, the average forward 12-month return of 20.26% was well above the historical annualized return of the S&P 500 of 7.82% since 1949, which carried a relatively high 16.29% standard deviation compared to the APR Index thrusts.

In fact, the three-month return after these two-week APR Index thrusts was 7.10%—nearly matching the market’s annualized return over the time period. In absolute performance terms, there was only one instance of a negative cumulative return for all time horizons (1969). It is worth noting that this negative instance was contextualized by the start of a new secular bear market in December 1968 that was preceded by a 17-month negative divergence in the NYSE all-issues advance-decline line. Other Lowry indicators identified this time period as a bear market for investors to avoid.

Taking into account all observations, the standard deviations of returns were below the average returns for the six and 12-month periods, indicating a high level of consistency of returns around the mean. However, it should be recognized that the greatest consistency appears for 12-month forward returns, which possess the lowest standard deviation relative to its performance figure, 12.29% versus 20.26%. This would suggest that these demand thrusts have the most utility for intermediate- to longer-term investors.

Another interesting and confirming characteristic of these observations is that five of them coincided with the timing of Lowry dynamic demand expansions. These rare signals occur when Lowry’s Short Term Index rises by at least 40 points from an oversold level in less than four weeks.

As detailed in our white paper “Lowry’s Dynamic Demand Expansions After Important Market Bottoms,” these conditions are historically consistent with the accurate identification of lasting market lows and new intermediate- to long-term uptrends. The overlapping signals of dynamic demand expansions and APR thrusts were observations in 1962 (both instances), December 1971, August 1982, and January 2019. The average 12-month S&P 500 return subsequent to these overlapping observations was 26.36%—firmly above the average performance for even the formidable APR thrust observations of 20.26%.

Most recently, the APR Index improved sharply as the market rallied from its late September 2020 low—jumping from 45 on Sept. 24 to 56 on Oct. 8, achieving a new recovery high ahead of the major price indexes. This 11-point, two-week climb is among the most vigorous in recent years. While these signals occur infrequently, three have now been registered since the start of 2019, with two of those occurring since May 2020. The last such rise developed between May 14 and 28 when the APR Index rose from 39 to 50. Prior to that, the most recent jump of 11 or more points in two weeks was off the late December 2018 market bottom. This observation yielded positive and above-average returns for each time measurement period.

While it is unknown how the newest 2020 signals will unfold, the greater context of them materializing after the major market bottom in March 2020 and while the APR Index was above its 30-week moving average (WMA) reflects growing market demand. Figure 1 highlights the two most recent instances of robust two-week APR Index increases. The Lowry Analysis uses the 30-WMA of the APR Index as a gauge for the market’s longer-term demand trend with APR readings over the 30-WMA indicative of a healthy condition. The fact that recent signals were observed above this level likely demonstrates a reassertion of the preexisting market uptrend. Deeply oversold conditions, often coinciding with major market bottoms, occur when APR readings are less than 30, as was the case in late March when the reading reached 24. Typically, these opportunities only present themselves about once a decade.

The background factors, including the resilience of the APR Index above its 30-WMA before reversing and the once-in-a-decade APR Index low having been reached in late March 2020, established conditions conducive to a durable advance. These characteristics, along with the evidence illustrated in prior observations of APR thrusts since 1949, suggest that the market’s recovery off its March bottom is likely in the early stages of reaccelerating.

We applaud the diligence of financial advisors—and their clients—during the very challenging times of 2020. Their collective commitment to finding new ways of working together, reinforcing strong advisor-client relationships, and seeking customized financial solutions...

The state of retail wealth management: 2020 trends and opportunities for 2021

Research findings from the 2020 PriceMetrix study, “The State of North American Retail Wealth Management,” identify key trends, “lessons learned,” and potential success factors for financial advisors.PriceMetrix, a data and analytics company that is a division of...

Against the backdrop of rising COVID cases, hospitalizations, and deaths, as well as a tumultuous political environment, two major economic reports were released last week. MarketWatch reported, “The U.S. lost jobs in December for the first time in eight months as the...

Richard F. Grant Jr., NSSA, ChFEBC • Gilbert, AZ RFG Capital Management LLC  have been in the financial-services industry for more than 30 years, working with clients across the U.S. and abroad. I tell...