While there is no shortage of market “experts” willing to proclaim the start of a new bull market, or those saying the bear is far from finished, financial advisors should avoid focusing on forecasts. Their most important, and difficult, task is keeping clients on track with a disciplined, long-term investment plan.

Back in the 1990s, one of my favorite movies was “The Usual Suspects.” The movie was a classic crime/mystery thriller with one heck of a trick ending. Those who have seen the movie will never forget hearing Kevin Spacey say, speaking of the mythical criminal Keyser Söze:

“The greatest trick the devil ever pulled was convincing the world he did not exist. And like that … he is gone.”

The velocity in the S&P 500’s price has been virtually unprecedented. 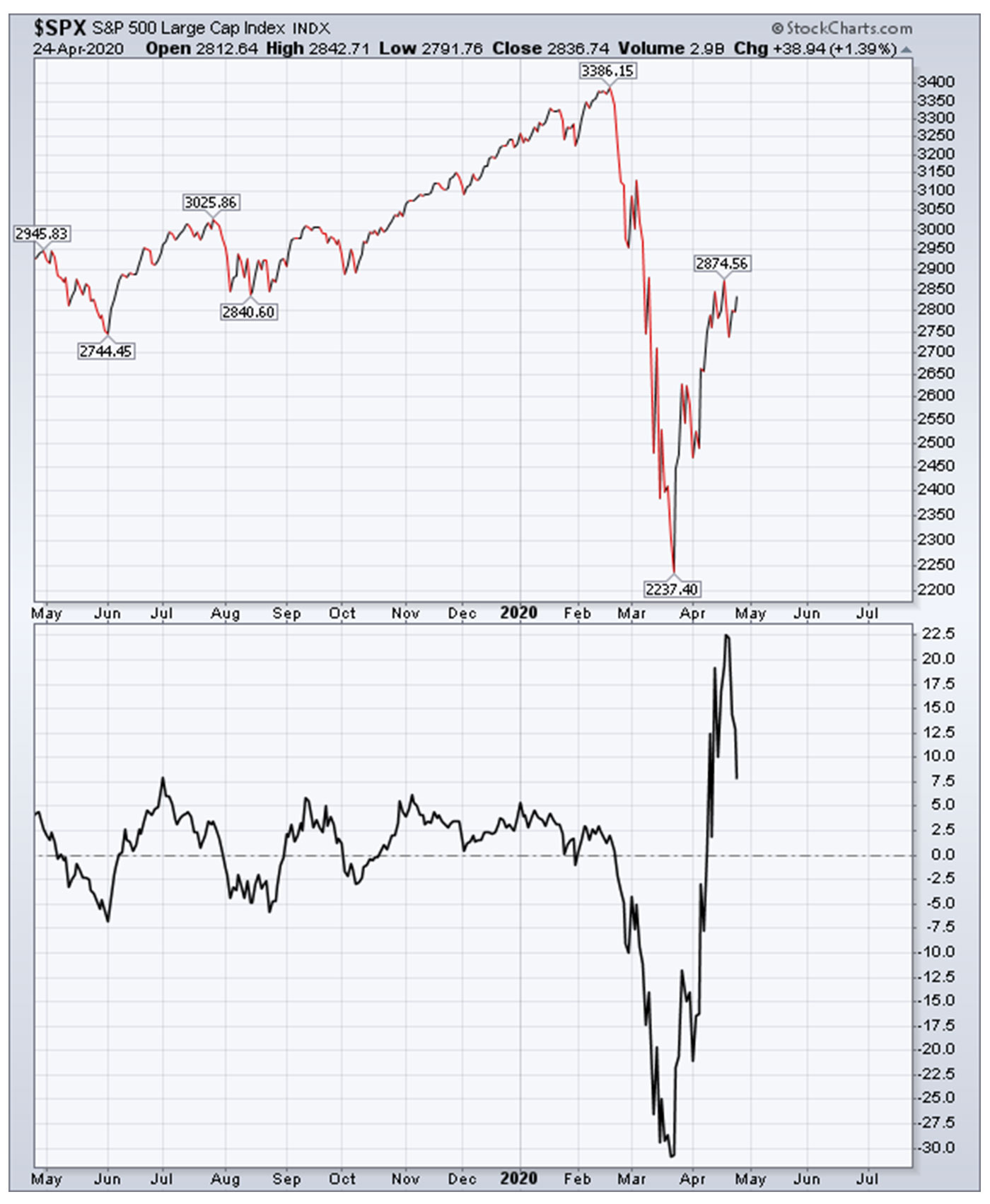 I believe the velocity we have witnessed is attributable to the polarizing battle that’s taking place between a major, and likely prolonged, contraction in the global economy and the unprecedented, coordinated fiscal and monetary policy response.

The global economy is still idling in neutral and rolling backward, and the fear and uncertainty regarding the coronavirus remain palpable. The S&P 500 crashed only one short month ago, credit spreads exploded as high-quality corporate bonds traded as if they were junk, oil futures traded into negative territory, and more than 30 million Americans filed unemployment claims in just six weeks. Heck, there were 700,000 jobs lost in March before we even had a recognized start date of a recession. It’s virtually certain that the job loss we experienced in April (announced the first Friday in May) will be the worst single month of job loss the country has ever seen.

The consumer’s confidence, sentiment, and balance sheet have been left for dead given the gigantic financial tsunami, so much so that it’s impossible to know just how many shoppers will be left to spend when we do reopen the economy. Some analysts are predicting the largest peak-to-trough decline in U.S. GDP since the Great Depression, or perhaps ever. To make matters worse, all of this is happening now in a seasonally favorable period of the year. What will the infamous third quarter of 2020 bring our way? Will participants have operated on the principle of “sell in May and go away”?

In the other corner, we have the collective fiscal and monetary responses to everything we just listed. Almost every central bank and government in the world has come out swinging, throwing the entire kitchen sink at the global economy. The collective fiscal and monetary response to the economic implications of COVID-19 are downright massive, and there’s no doubt that more help is on the way. The Federal Reserve has pledged “whatever it takes” and continues to expand its balance sheet to levels that were once never thought possible. Quantitative easing forever has been promised, if necessary. Fiscally, the next phase of response is already being discussed by Congress and the Trump administration. It has amounted to a few trillion here, a few trillion there, and clearly the S&P 500 likes what has been done since late March.

But one trillion-dollar question for investors is, “Which calendar month will be remembered as the liar?” Like any battle, it’s not over until it’s over, so it’s impossible at the present moment to know which side is going to prevail—bull or bear.

That’s the first main point of this article: that nobody, myself included, knows what lies ahead.

To operate as fiduciaries, we need to have an open mind about what lies ahead, since the S&P 500 will find a way to trade beyond the limits of imagination. We need a plan that predicts our behavior into the future, when we press “buy” and “sell,” rather than a plan that attempts to predict whether the upside reversal in April is a bear market rally or the start of a new bull market.

Unfortunately, there are no magical patterns, signs, signals, or indicators that can definitively tell us what the S&P 500’s returns will be for the next three to six months—or even one year from now. Nothing can tell us the maximum drawdowns and rallies that will be recorded along the way, no matter how much we all want to believe otherwise. The price action in April isn’t predictive of the price action in August. We live in unprecedented times, we’re experiencing highly volatile price action, and it’s important we conquer ourselves and find conviction in the idea that we have no idea what lies ahead. In turn, this then optimizes our ability to be dispassionate long-term investors on behalf of our clients, following a disciplined, risk-managed approach. Then and only then can we truly “trust the process.”

Don’t let the market trick you

“There’s no better time than now to be proactive in helping our clients avoid acting upon the ‘greed’ associated with wanting to increase their allocation to the large-cap domestic-equities space. I think we need to plan for the day when the ‘fear’ of the large-cap domestic-equities space causes our clients to want to abandon their fundamental investment policy.”

We’ve now come full circle to the days where both “fear” and “greed” are leading our clients to consider abandoning their long-term investment policy. The average investor is anything but dispassionate, unfortunately.

Given the volatility across virtually all asset classes, it’s only natural for some of our clients to think that their portfolio is broken. Emotionally, it’s normal for them to feel like they had too much invested in stocks in March, and not enough invested in stocks by the end of April.

The problem is that we’re all hardwired to want to fix what’s “broken.” Not because it is truly broken but because of investors’ behavioral biases, reinforced by the constant financial and virus headlines.

The volatility in the global financial markets is tricking our clients into thinking there is something they need to be doing differently with their portfolio. Many clients are probably wondering and asking their advisor, “What should we be doing now?” It’s up to us to help them understand that what we should be doing now is probably the same thing we should have been doing three, six, and 12 months ago, as counterintuitive as it may seem.

We have to do everything we can to be proactive in managing their emotions, to help them place faith over fear, to show leadership, to not let them get fooled, and to not let the market trick us. Here are a few of the ways we’re doing that for our clients:

Putting it all together, uncertainty is the mother of volatility, both in markets and in the emotional aspect of investing. Don’t allow present-day uncertainty to trick your clients, or yourself, into thinking you’re certain about what lies ahead. Find peace in the brilliance of saying, “I don’t know”; focus all your efforts on what you can control; and help your clients stick to the process and plan they’ve entrusted you to execute.

This material is intended for industry professionals and is not intended to be relied upon as a forecast or investment advice, and does not constitute a recommendation, offer, or solicitation for any specific security or any specific investment strategy. Investment advice is only provided within the context of a written advisory agreement with a client. This material represents the current market views of the author, and there is no guarantee that any forecasts made will come to pass. Due to various risks and uncertainties, actual events, results, or performance may differ materially from those reflected or contemplated in any forward-looking statements.