What will the next bear market look like: Grizzly or Teddy?

The average bear market decline is 28%, but there is nothing average about them. Some are grizzly bears falling almost 40% and lasting years, while others are smaller and shorter—teddy bears in comparison. Are there ways you can tell in advance which bear is in the cave? Yes.

Investors over the past 15 years saw retirement dreams evaporate as two grizzly cyclical bear markets took the equity markets down more than 50%.

Today we would be better served focusing on bears to come and putting them in perspective. Not all bear markets are the same, and therefore each does not deserve the same degree of concern. So let’s look at history for a clearer perspective on cyclical bear markets.

Looking back over the past 66 years with 16 bear markets and corrections greater than 14%, two important criteria separate grizzly bear markets from teddy bears: 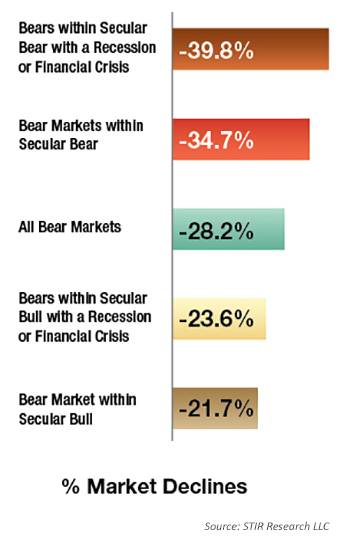 Another essential element in identifying the potential of a grizzly bear versus a teddy bear is whether the country is in a recession and/or financial crisis. Since 1949, the market has had 16 corrections or bear markets over 14% that were accompanied by 11 recessions/financial crises.

Currently the economy is in a slow-growth mode, and over the past months legitimate concerns have surfaced over weaker economic data and a lower trajectory for corporate earnings. However, there is no firm indication that a recession is on the horizon.

In my book, “Dow 85,000! Aim Higher,” I make the argument that a new secular bull market is in progress and has the potential to produce 700% gains by 2030. It will be instructive to see if the current pullback in the markets falls into the teddy-bear camp (as I expect), or a full-blown grizzly.

That does not mean or imply that risk management needs to be forgotten. All risk-management defenses need to stay in place, in case history doesn’t repeat itself or what starts out as a teddy bear is suddenly surprised by a financial crisis (1987) and becomes a grizzly bear.

Risk management has two sides: protection of capital during the inevitable market declines and participating in major bull market moves. A bigger concern today may not be worrying about the next bear market but making sure you are fully participating in the current secular bull.