The headline number for March 2020 U.S. retail sales was shocking, but not unexpected.

According to a recent release from the U.S. Census Bureau, retail sales plummeted by record levels.

According to a Reuters survey of economists, CNBC reported, retail sales were forecast to have fallen 8.0% last month.

“For online sales, that increase in share was nothing new, but for general merchandise it was a major reversal. As shown in our ‘Bricks’ vs ‘Clicks’ chart [Figure 3], both sectors saw record monthly moves in their share of total sales, although the ‘clicks’ camp still has the lead.” 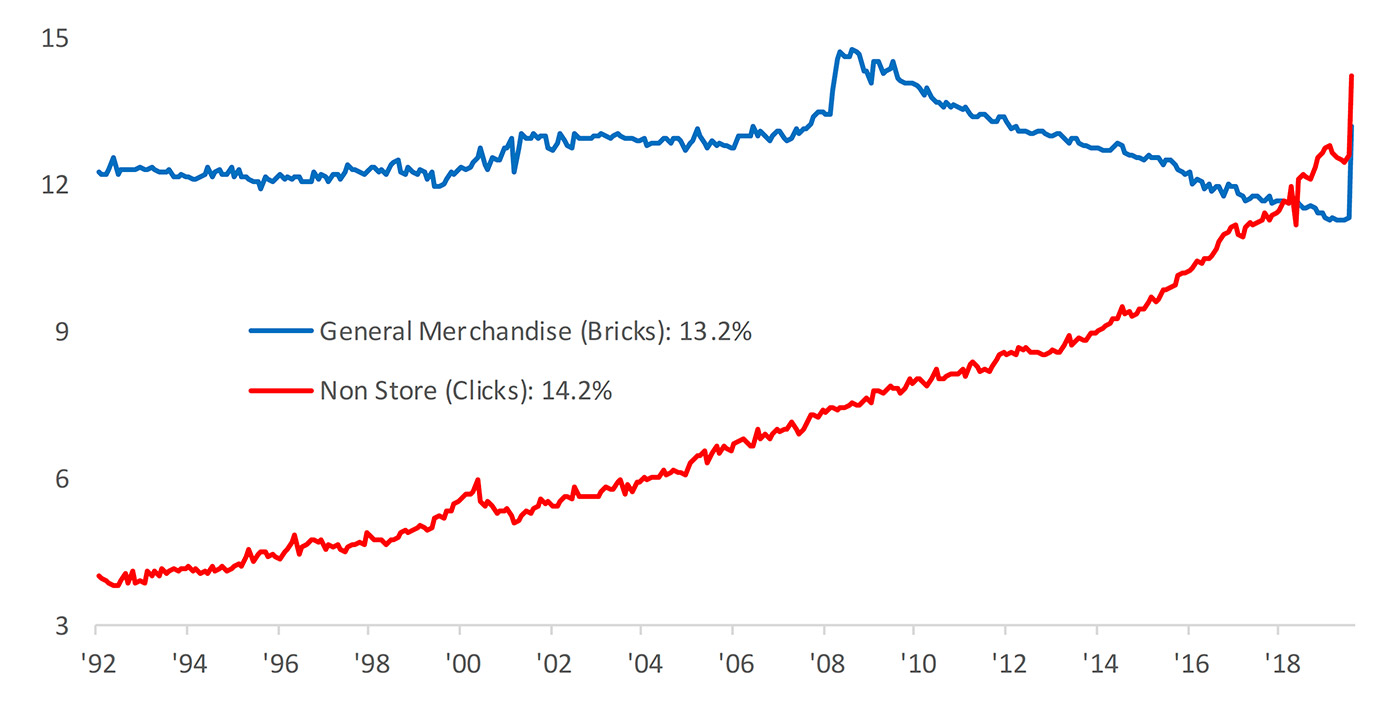 Retail sales were down 6.2% compared to March 2019, according to the Census Bureau. CNBC said, “Economists see no respite for consumer spending in the second quarter, with estimates as low as a 41% rate of decline.”

However, the National Retail Federation, while acknowledging that “the road to recovery could be long and slow,” put a much more positive face on the March report (and first quarter) in looking at “core retail sales”:

“NRF’s calculation of retail sales—which excludes automobile dealers, gasoline stations and restaurants in order to focus on core retail—showed March was up 1.7 percent seasonally adjusted from February and up 4.5 percent unadjusted year-over-year.

“The difference between the Census Bureau and NRF numbers is because the categories NRF excludes saw some of the biggest hits. In addition to bars and restaurants being closed, gasoline sales were affected both by fewer people driving and lower gas prices while auto dealers were among those affected by stay-at-home orders. …

“The March NRF numbers follow a decline of 0.2 percent in February from January as the coronavirus began to have its first effects. February sales were up 7.4 percent year-over year, but the increase was artificially high because of low sales following the government shutdown in early 2019. The three-month-moving average as of March was up 5.1 percent.”

Regarding the auto manufacturers and auto dealers not included in the NRF numbers, Barron’s commented last weekend,

“Auto sales fell 27% in March, the Commerce Department reported this past week. Remember, business shutdowns became widespread only in mid-March, so April’s decline is likely to be much worse. Most car dealers are closed.

“That’s obviously terrible news for General Motors (ticker: GM), Ford Motor (F), Fiat Chrysler (FCAU), and other car makers, and there will be the usual cascade of pain. Falling vehicle sales will hurt component manufacturers, such as BorgWarner (BWA) and Aptiv (APTV). As cars continue to roll off leases, used inventory will swell; prices are already falling. Megadealers, including AutoNation (AN) and CarMax (KMX), will be stuck with inventory that is losing value, but they will have it better than mom and pop dealers, which lack the same online sales savvy and access to capital.

“Analyst Adam Jonas at Morgan Stanley expects government help for the car producers, but not bailouts. ‘We don’t think that the manufacturers are going to fail the way they did back in 2008 and 2009,’ he says. ‘But the industry is going to need support, and this time around we think the support is going to come from the bottom up to the top, in the form of a consumer stimulus. … Morgan Stanley’s Jonas envisions a long list of changes after the pandemic: less commuting, less car renting, younger cars, fewer dealers, more digital and touchless dealer services.”

The sales decline has hit small businesses particularly hard, especially restaurants. According to a recent National Restaurant Association survey, “the entire restaurant industry has lost two-thirds of its workforce” and is on track to a “COVID-19-related loss of more than $240 billion nationwide by the end of the year.”

The U.S. Chamber of Commerce has been very active in government lobbying and member support efforts to help U.S. businesses. In a press release on April 15, they announced the creation of a nationwide “Save Small Business” initiative. Here is an excerpt from the release:

“To combat the economic destruction threatening the survival of small businesses in every town across America, the U.S. Chamber of Commerce today launched the Save Small Business Initiative—a nationwide program to address small businesses’ immediate needs, mitigate closures and job losses, and mobilize support for long-term recovery.

“The Save Small Business Initiative features a four-part campaign including financial aid, resources and guidance, advocacy, and polling, as well as a call to action for the larger business community and government to help small businesses.

“‘Our nation is facing a crisis that requires an unprecedented level of support and collaboration between government and business,’ said Tom Donohue, CEO, U.S. Chamber of Commerce. ‘The Save Small Business Initiative is a multifront battle plan to combat the ongoing economic destruction and lay the foundation for recovery.’”

“A recent poll conducted by the Chamber and MetLife found that more than half of small businesses (54%) have closed at least temporarily or will close in the next two weeks. One in four (24%) are two months or less away from permanently closing.”

Goldman Sachs is calling for an overall sharp decline in second-quarter U.S. GDP: a decline of 11% from a year ago and 35% from the previous quarter on an annualized basis. According to the assessment of this forecast, says CNBC, “The global economic hit from the coronavirus crisis will likely be four times worse than the financial crisis and the U.S. will see its highest unemployment rate since World War II.”

While acknowledging the fluidity of the situation and the constantly changing data, Goldman, according to CNBC, forecasts a healthy rebound later in the year: “third-quarter growth up 19% from the Q2 plunge followed by another 12% jump in the final three months of the year.”

“The initial improvement [in outlook] was mostly policy-driven, but the greater optimism of the past week seems to be at least partly related to the virus itself,” Jan Hatzius, Goldman’s chief economist. “It might be possible to bring back at least part of the lost output with a sharp increase in testing as well as more limited changes to business practices that lower the risk of infection.”