Why changes to the Dow 30 matter to investors

The Dow Jones Industrial Average (DJIA) is considered by many to be the primary indicator for the U.S. stock market and the overall health of the economy. Any changes to the components of the Dow, especially major changes, can affect investors’ portfolios and offer a perspective on growing and declining areas of the overall economy.

This venerable average was created on July 3, 1884, with 12 components. Over the 136 years since then, there have been many changes to the components. Most of the changes occurred after a significant global economic and financial crisis, which, in turn, usually led to a depression or recession.

The lines on Figure 1 show when there were component changes to the Dow going back to 1930. Most of the time, one component was added and one was dropped. It is rare to have three or more components switched at one time. August tends to be a common month for these changes. 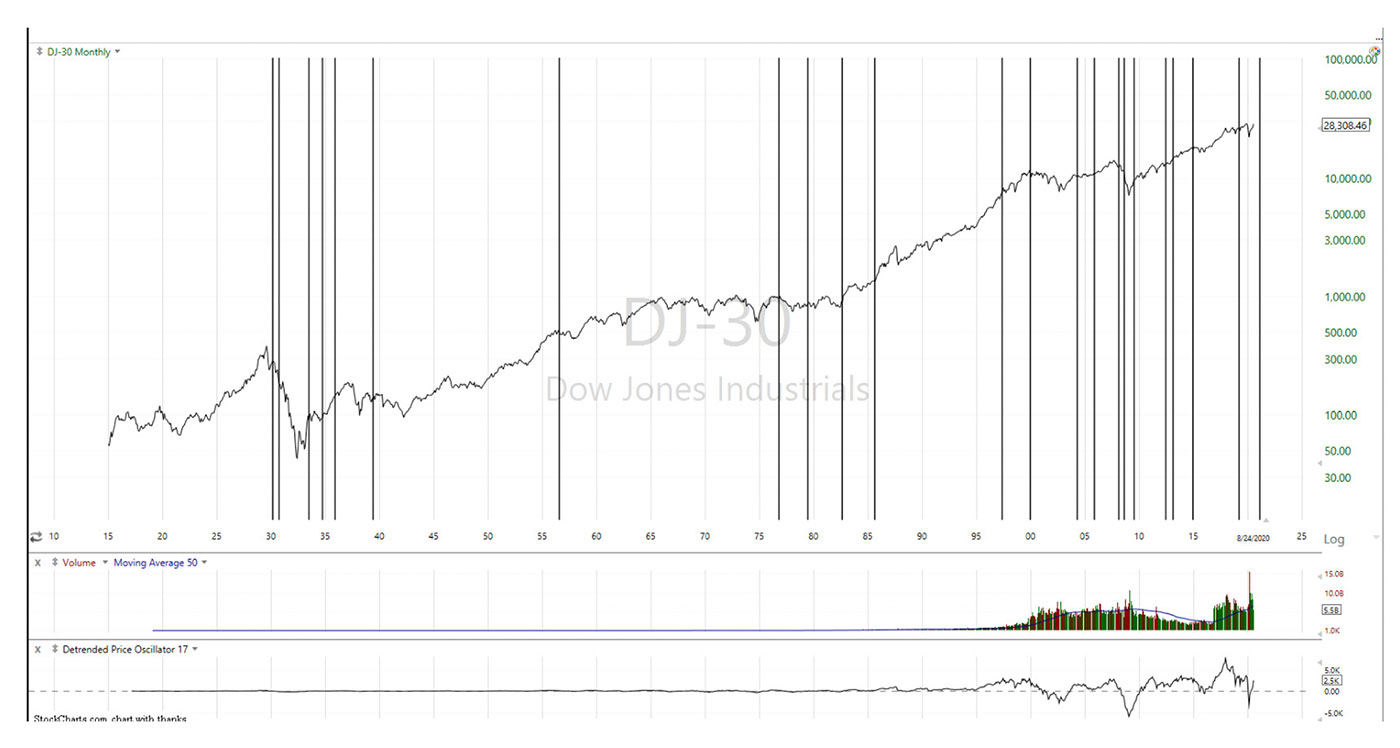 While the Dow Index is maintained by S&P Dow Jones Indices, an entity that is majority-owned by S&P Global, The Wall Street Journal (WSJ) holds the proprietary formula that creates the Dow 30 value. It is a price-weighted average that has a divisor, or predetermined constant, that is used to determine the effect of a one-point move in any of the stocks that comprise the Dow. In my opinion, the emphasis on certain companies in the list is used to perpetuate the index’s general uptrend (interrupted, of course, during extreme market collapses). The uptrend is further supported by the periodic replacement of “weaker” companies with companies having stronger growth prospects.

The Dow changes components to maintain its integrity as an important blue-chip representation of the U.S. stock market. According to Investopedia, “As the economy changes over time, so does the composition of the index. The Dow typically makes changes when a company becomes less relevant to the current trends of the economy, or when a broader economic shift occurs and a change in the composition of the index needs to be made to reflect it.”

FIGURE 2: DOW COMPOSITION BY INDUSTRY SECTOR AS OF JULY 2020

Note: Based on GICS sectors.

On Aug. 31, 2020, three Dow components were dropped and three new components were added. This is a significant change to the mix of industries and companies that, in effect, represent the entire 5,000-plus publicly traded companies listed on the U.S. stock exchanges.

A major reason for the change is that Apple Inc. (AAPL) implemented a massive 4/1 split on that date. With the split, AAPL effectively experienced a 75% decline in price, which would impact the Dow’s price trend and would reduce the benchmark’s exposure to the Technology sector if adjustments to other components were not made.

The changes to the components will reflect, to a large degree, more emphasis on current growth sectors in the economy.

Amgen (AMGN), which is a biotech company, will replace the drug manufacturing company Pfizer (PFE), which, while being in the highly publicized COVID-19 vaccine race, has had issues with its generic drug business. Salesforce.com (CRM), a cloud-based software application company in the Technology sector, will replace Exxon Mobil (XOM), which has had a slumping share price for over five years. Honeywell (HON), a diversified industrials and technology company with aerospace exposure, will replace Raytheon (RTX), which finalized a merger with United Technologies in April and focuses on the aerospace and defense industries.

The changes, according to an S&P news release quoted by The Washington Post, “help diversify the index by removing overlap between companies of similar scope and adding new types of businesses that better reflect the American economy.” For the same article, Kristina Hooper, chief global strategist at Invesco remarked, “The big picture is that the Dow components have been curated: Old Economy stocks are being replaced by New Economy stocks.”

It is rare for the Dow to replace three companies all at once. I believe it is an important signal for long-term investors to consider that they must also adapt and change their portfolio mix of industries to ensure their long-term investments continue to reflect the ever-changing dynamics of the U.S. economy.

The U.S. economy is changing during this pandemic in ways that are not always visible, transparent, or understood by the average investor. The Dow 30 is supposed to reflect the U.S. economy and the strongest companies within it. In the past, it has frequently represented less than 30 industries; it has typically included two or three component companies from an industry deemed to have more influence within the economy.