Trend following is a risk-management approach more than anything else. It attempts to participate in market upside when it can, but always with a focus on downside protection. Its use as a core investment strategy can be particularly beneficial for investors taking retirement withdrawals during bear markets.

Getting back to positive for the year does not mean this bear market is over, however, as the S&P 500 is still down slightly from its all-time high set on Feb. 19. Buy-and-hold investors have now spent more than five months either losing money or trying to recover from those losses. We’ll have to wait to see how much longer the recovery will take. If the S&P 500 fully recovers anytime soon, it will be in the books for the shortest bear market in history. The current shortest bear market in the S&P 500 was from February 1966 to May 1967; that one lasted 14.8 months.

See Related Article: Risk is always with us

The outperformance of trend following over a buy-and-hold approach to investing is usually very apparent during and right after a bear market.

One major benefit and source of outperformance of trend following comes from avoiding large losses. If bear markets didn’t exist, there would be less of a reason to use trend following; passive investing wouldn’t suffer devastating losses and could be tolerated by most investors.

Of course, bear markets do exist, and they occur with somewhat regular frequency. Since the 1960s, the S&P 500 has had a bear market about every seven years on average. If you invest in stocks over 30 years or longer, you should probably expect to face at least four bear markets. The bull market returns can be great for passive investors, but those bear markets sure won’t be any fun. Also, the timing of bear markets in your investment time frame matters a lot. Experiencing bear markets when you are in or near your retirement is much worse, as we’ll illustrate in this article.

The problem with bear markets

The problem with bear markets is not only the size of the losses—or drawdown from peak to trough—but also the amount of time it takes to recover from losses. The time that it takes for your investments to get back to even after a major drawdown event is a huge drag on your psyche and can, of course, be detrimental to investing plans.

If you’re fortunate enough to be in the accumulation phase (working/saving years) when you experience a 20% drawdown, academic finance says to stay invested so you can fully recover as the market does. Being down 20% means you need a 25% gain just to get back to even. The problem with drawdowns is exacerbated if you are at or near retirement. A 20% drawdown on your account balance while you are withdrawing retirement income could take much more than a 25% gain to get back to even, and it is highly dependent on the duration of that drawdown.

Let’s look at the impact of retirement withdrawals (“w/d”) on different investments during this current bear market through the end of June (which may end up being the shortest in history). Figure 1 shows the S&P 500 Index (100% stock portfolio) and the Vanguard Balanced Index Fund (VBINX)—a proxy for the common 60% stock and 40% bond portfolio.

FIGURE 1: COMPARISON OF 100% EQUITY AND ‘BALANCED’ PORTFOLIOS
(WITH AND WITHOUT WITHDRAWALS) 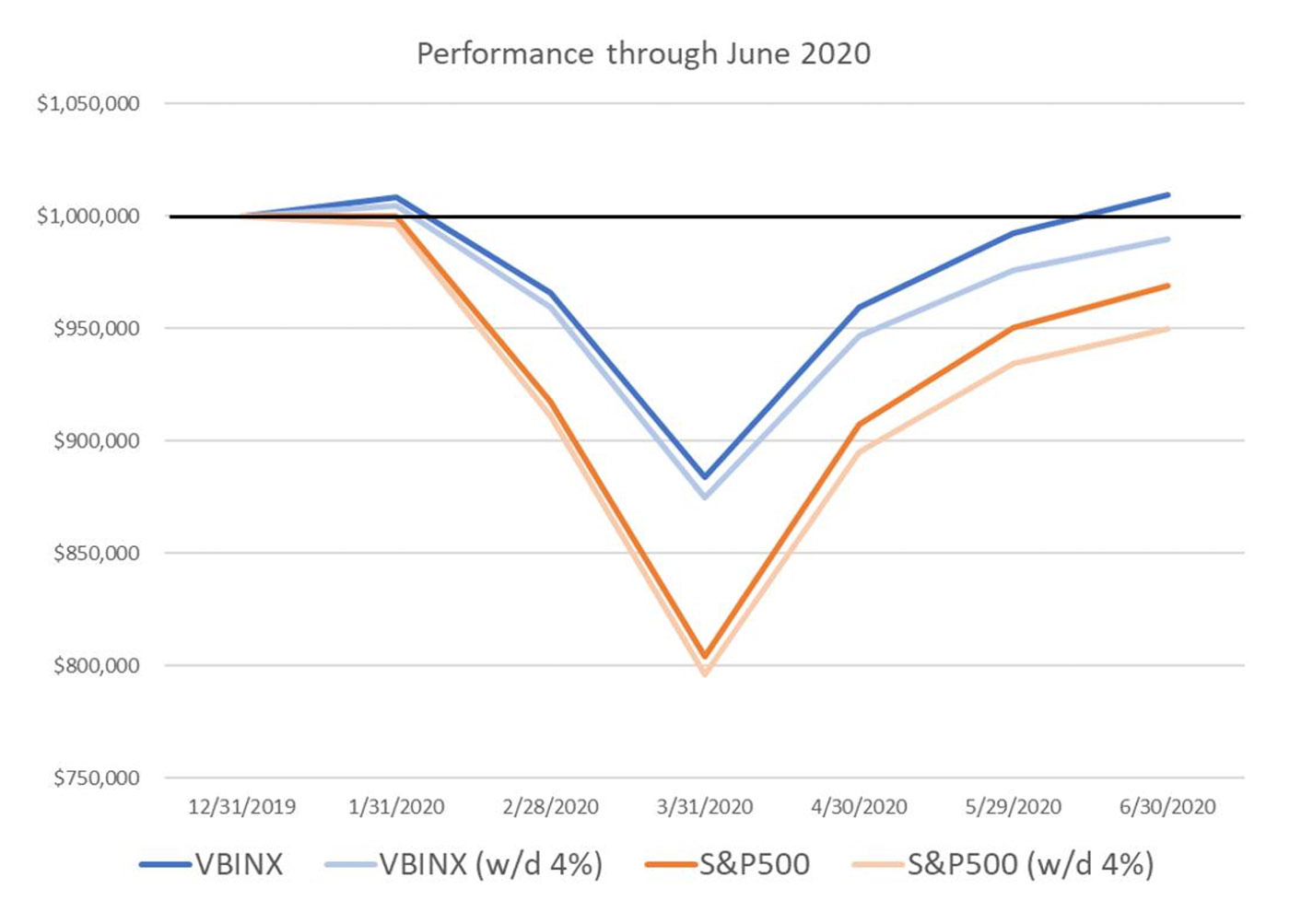 The darker blue and orange lines in Figure 1 reflect starting the year with a $1 million buy-and-hold account in each investment. The lighter lines, denoted with “(w/d 4%)” in the legend, reflect the same investment accounts, but money has been withdrawn each month based on a 4% annual withdrawal rate, which is a common retirement withdrawal plan. The horizontal black line is at $1 million. While the 60/40 portfolio recovered to back over $1 million by the end of June, the VBINX account with withdrawals had not—and this is over a very short time frame of just six months. The two S&P 500 accounts had not yet recovered, and the one with withdrawals was, of course, furthest behind.

In longer bear markets, the impact of withdrawals is magnified. Figure 2 shows the 60/40 accounts starting with $1 million at the end of 2006, both with and without withdrawals, going through the 2008 bear market and subsequent recovery. 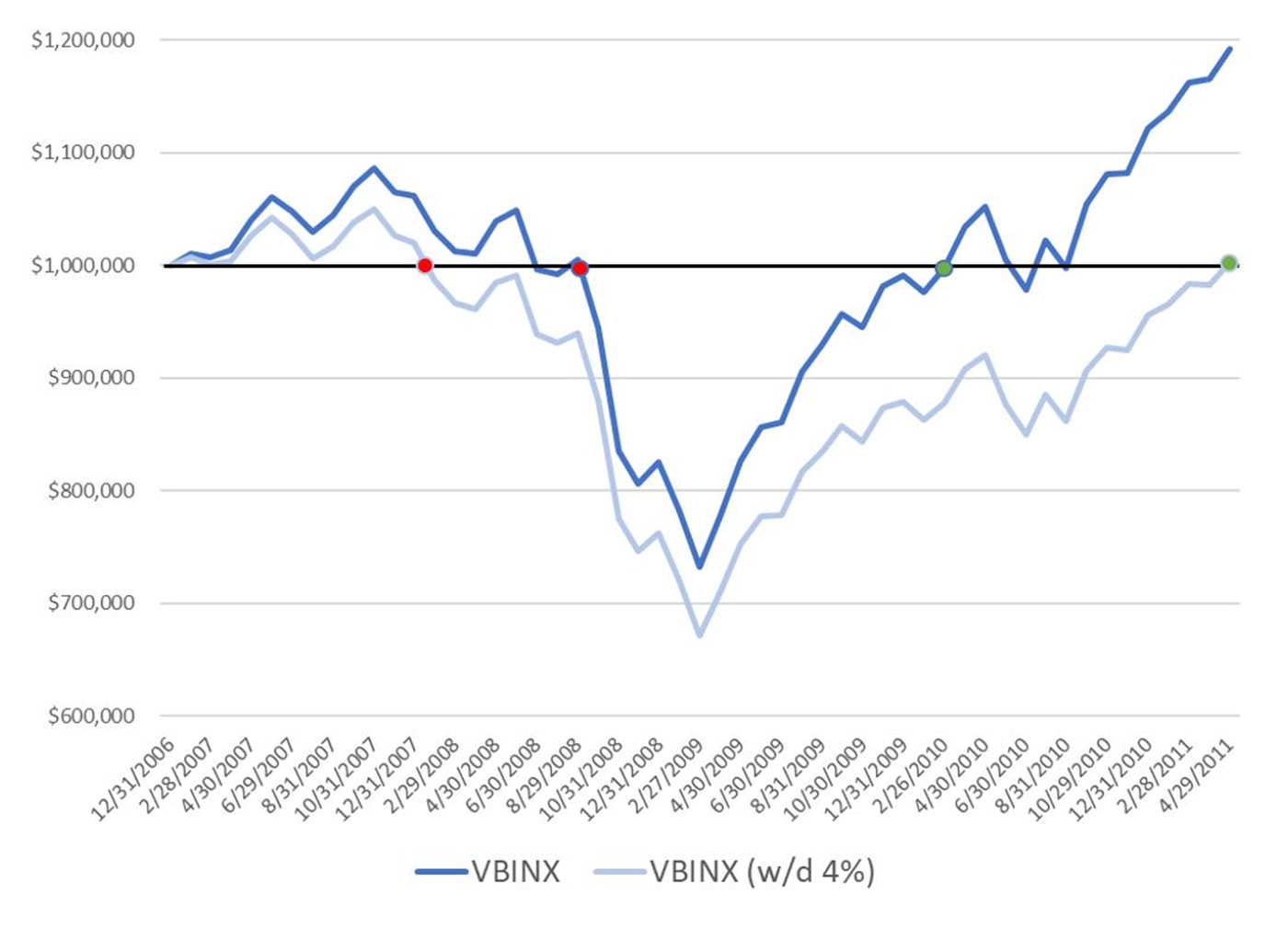 The red dot on each line is the point prior to dipping below $1 million, and the green dot is when they recover to $1 million. The period between the dots on VBINX is 19 months, while the period below $1 million when you have withdrawals is 40 months—ouch! Withdrawing funds to live off of in retirement would have made your recovery take more than twice as long. If you were a 60/40 investor in retirement during this time, you went more than three years without any portfolio growth, and you also saw the value of your portfolio drop 33% at its lowest point. Few retirees can withstand such devastating losses. Most will quit while they’re down and never get the shot at recovering, maybe forcing them to drastically change their retirement plans. They may even have to come out of retirement.
FIGURE 3: IMPACT OF WITHDRAWALS IN A LONGER BEAR MARKET (100% EQUITY PORTFOLIO) 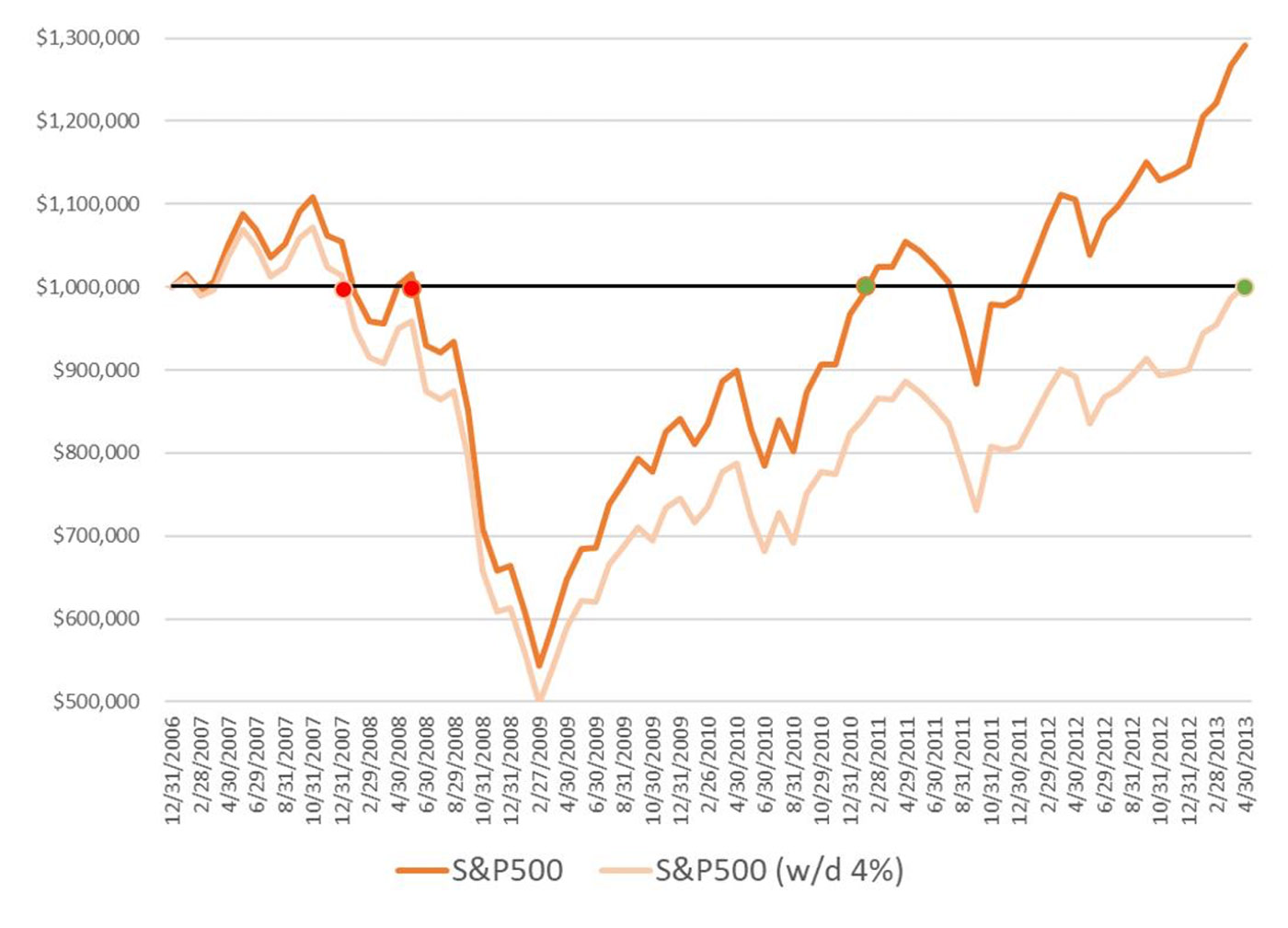 The S&P 500 portfolio without withdrawals was below $1 million for 33 months, while the account taking monthly withdrawals took 64 months to recover (more than five years)!

We think a much better, more tolerable approach to investing when your nest egg becomes sizable and your investment time horizon is shorter, is to use a trend-following approach. Trend following can be very powerful, as it will generally help to reduce the magnitude of the drawdowns and also the amount of time an investor spends in drawdown. This equates to more time making new money and higher compounded returns over time. It is also a great diversifier to traditional portfolios, as trend following rarely suffers underperformance at the same time a traditional portfolio is suffering losses. Figures 4 through 6 show the same three charts with the addition of our Trend Plus portfolio. (Note: We always show modeled returns prior to 2017, as this exact strategy was not in use before that time.)

FIGURE 4: 2020 BEAR MARKET (COMPARISON OF TREND FOLLOWING TO OTHER APPROACHES) 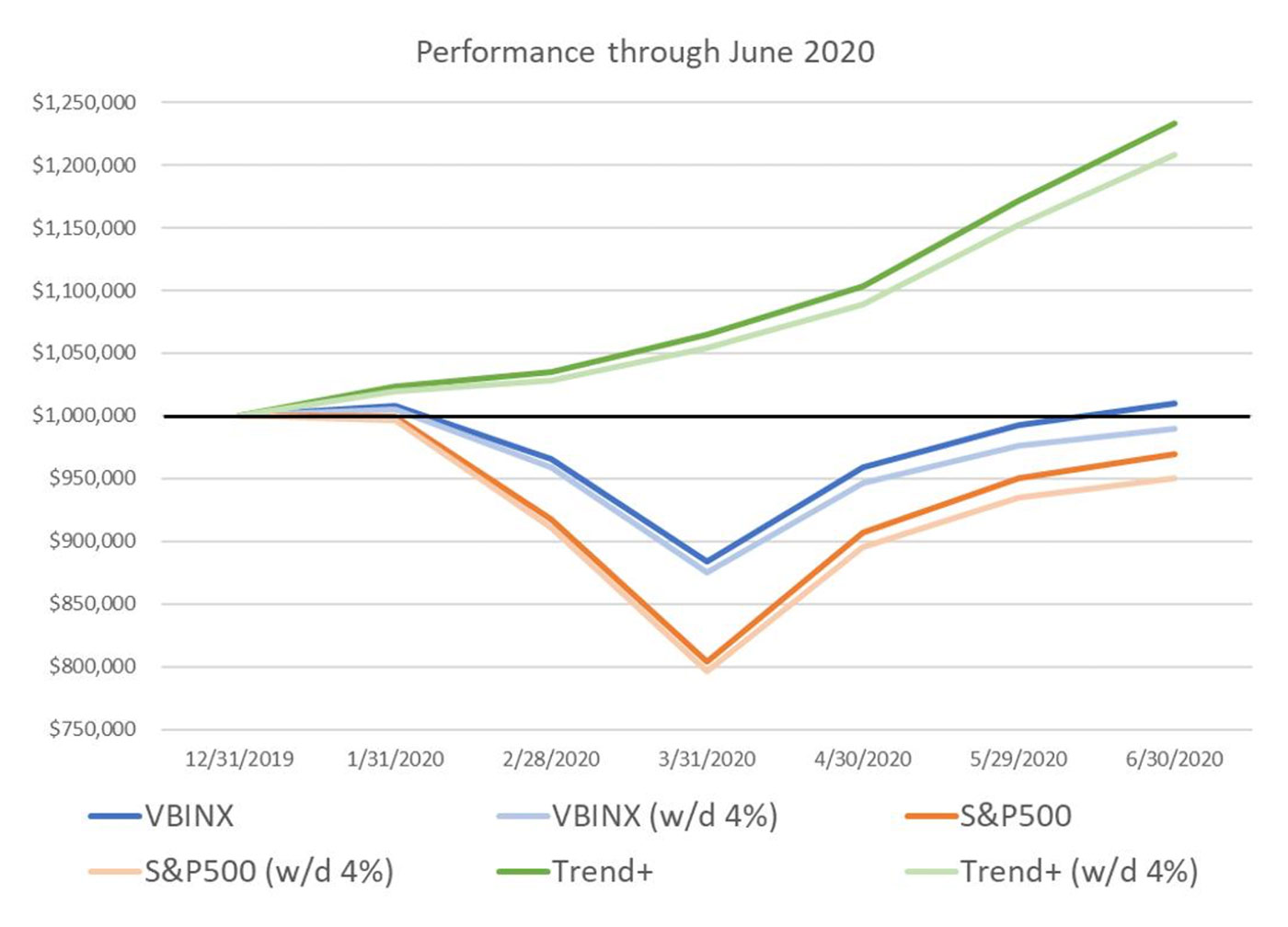 FIGURE 5: IMPACT OF WITHDRAWALS IN A LONGER BEAR MARKET
(TREND FOLLOWING VS. BALANCED) 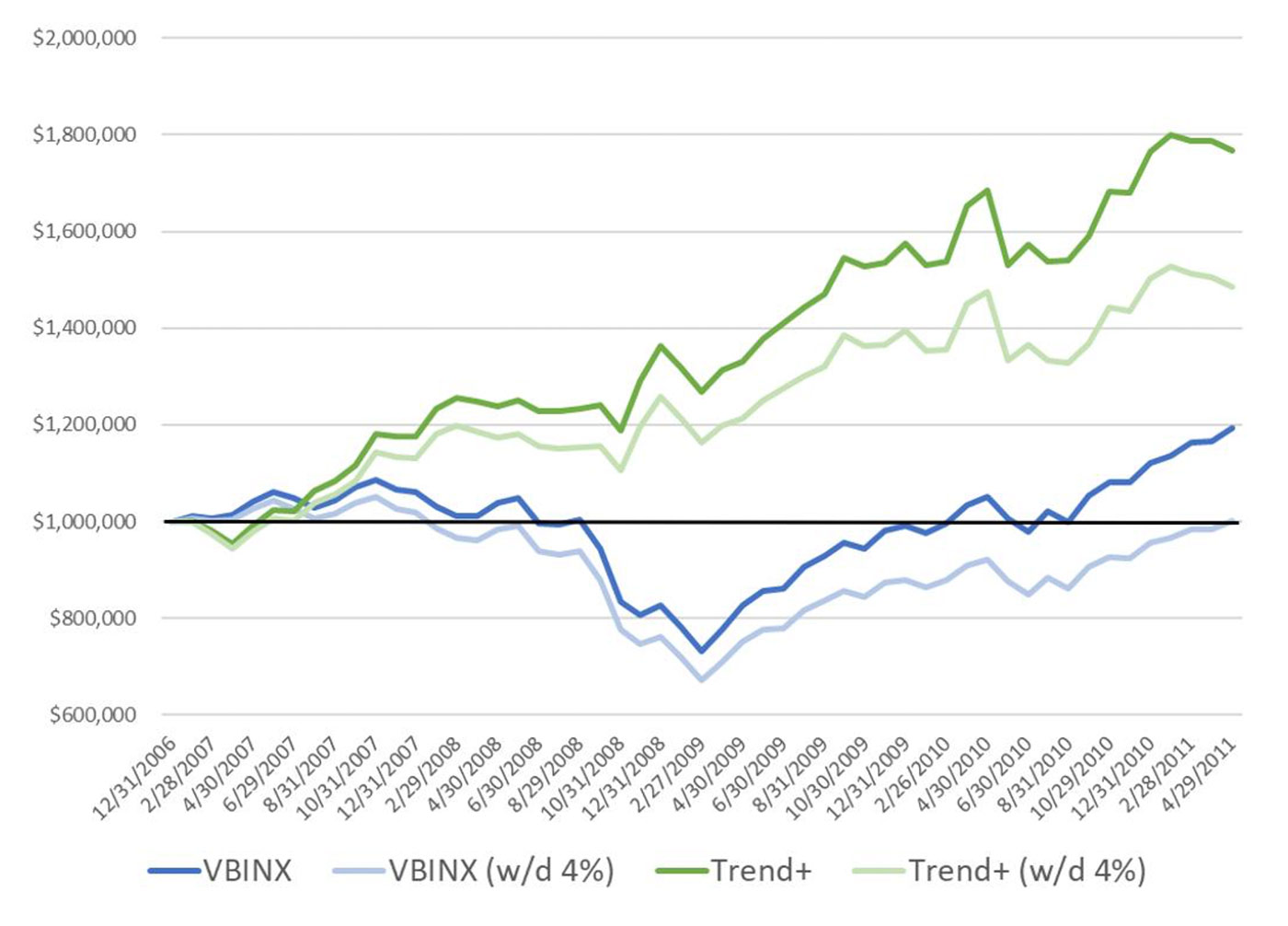 FIGURE 6: IMPACT OF WITHDRAWALS IN A LONGER BEAR MARKET
(TREND FOLLOWING VS. 100% EQUITY) 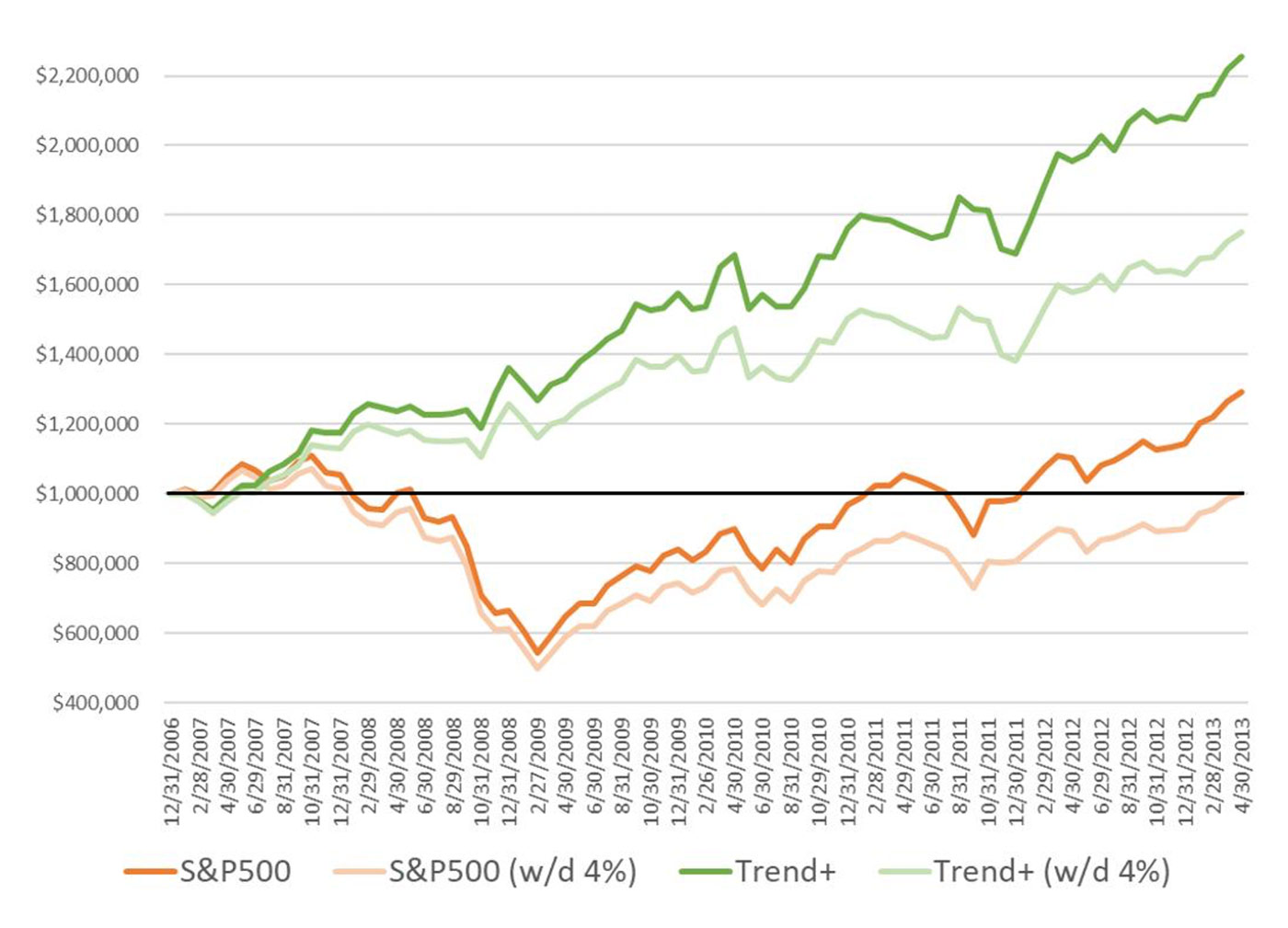 As mentioned earlier, the outperformance of trend following over a buy-and-hold approach is usually very apparent in bear markets. It sure has been this year, with buy and hold still trying to recover while the trend-following approach is at highs, with positive returns each month.

Trend following is a risk-management approach more than anything else. It attempts to participate in market upside when it can, but always with a focus on downside protection. If you’ve been investing for a while and are tired of traditional approaches to handling bear markets, maybe it’s time for you to take a different approach to investing.

Greg Morris has been a technical market analyst for over 50 years. His experience includes analysis software development, website analysis and education, and money management. He has a long history of understanding market dynamics and portfolio management and has written four books: “Candlestick Charting Explained” (and its companion workbook), “The Complete Guide to Market Breadth Indicators,” and “Investing with the Trend.” He previously served as the chief technical analyst and chairman of the investment committee for Stadion Money Management and currently serves as a senior advisor to McElhenny Sheffield Capital Management (MSCM).