What does technical analysis say about the current bull market?

Relational Technical Analysis, which combines both technical and fundamental analysis of the modern market structure, is not a predictive tool. No analytical system can accurately predict the future. That said, history does repeat, and repetitive patterns are called cycles. These cycles can be used in analyzing stock market indexes. However, cycles are rarely identical in duration or in the depth or magnitude of the cycle pattern.

It is not the intent of Relational Technical Analysis to try to perfectly time the market. All technical analysis should be used strictly as a guideline as to what may happen in the future. It is not a mathematical equation to determine a precise measure of future index value.

The S&P 500 offers the most representative index for understanding the current and near-term market conditions. It is studied due to the broad number of components and the interpretive values it provides. The S&P 500 is also the most popular basis for index funds, and SPY—the primary ETF of the S&P 500—is the most popular ETF worldwide.

This analysis is a simple one that aids in envisioning the possible duration of the bull market trend for the S&P 500 after the briefest bear market ever documented. Many factors contributed to why the market corrected and recovered faster than any other recorded market crash:

As the indexes rebounded quickly off their value lows, millions of 401(k) and IRA accounts were “saved” before most people could even contemplate making emotionally driven decisions about their investments. The vast majority of pension funds offer S&P 500 index funds in one form or another.

Analysis of cycles from bullish trends to bearish using the S&P 500
This chart provides insights for investors who may not be familiar with technical analysis, helping them understand the patterns and what the chart represents in terms of potential future market direction. 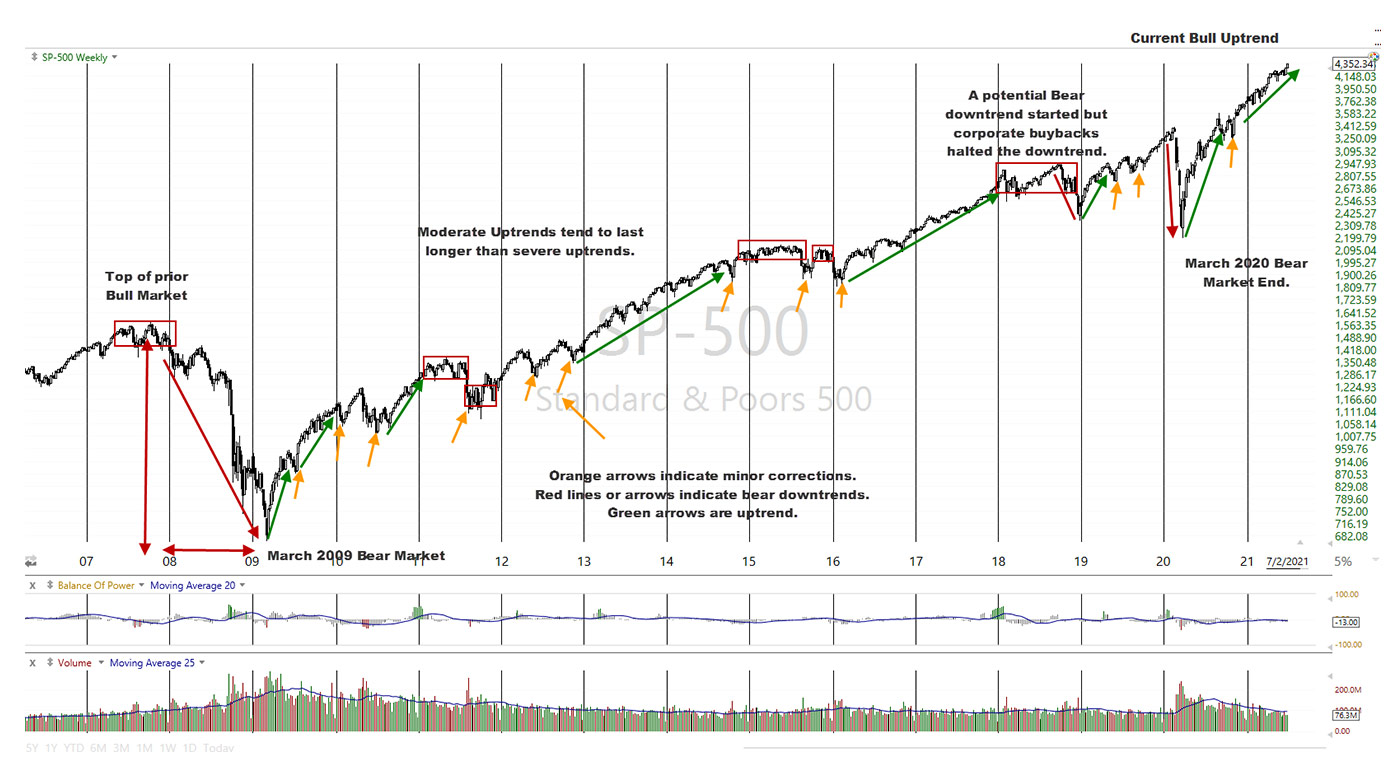 There are three basic, but important, trends to recognize in the modern automated stock market:

When the index uptrend starts to trend sideways, this is a form of a correction and frequently results in a minor correction. The red rectangles on the chart show the sideways trends, which mostly ended with a minor decline in index value or, in some cases, a bear downtrend. The minor corrections are a natural and necessary value action to help sustain the long-term bull uptrend.

The more severe bear downtrends tend to rebound with an accelerated uptrend that is often too steep to sustain and is followed by another minor correction.

Starting in 2018, the majority of industries in the S&P 500 entered a bearish industry cycle. However, the impact on the Index was minimal at that time due to over $1 trillion that major corporations spent in 2018 to buy back outstanding shares of their company’s stock. (This was part of a five-year period of buybacks that exceeded $3 trillion.) This disrupted the bear downtrend, ending it quickly. The uptrend resumed for the indexes but not necessarily for the many S&P 500 component stocks.

When the uptrend or downtrend goes nearly vertical, a sudden and possibly short-term turn in the opposite direction often occurs. This pattern is visible in 2009, 2018, and 2020.

At the time of the writing of this article (July 7, 2021), some important fundamental indicators are beginning to trail behind the broad market’s index value. A short-term correction would help maintain the uptrend.

The long-term trend of the chart shows that when the bear downtrend ended in March 2009, a long-term bull market continued until February 2020—almost exactly 11 years. This provides an interesting perspective on what may be possible for the duration of the young bull market currently underway since March 2020.

Joseph St. Pedro • Royersford, PASt. Pedro & Associates Inc. • Securities America Inc.Read full biography belowProactive Advisor Magazine: Joe, talk about your personal background and how your career has evolved. I was born and raised in the Azores islands, which...

In investing, as in life, it’s all relative

In creating a portfolio, it is important to reflect varying frames of reference. This can be achieved by using diversified asset classes in multiple risk-managed strategies that focus on different time periods.[dropcap style="font-size: 60px; color:...

Overview of June 2021 existing home sales Existing home sales increased 1.4% in June to a 5.860 million annual rate, just below the consensus expected 5.900 million. Sales are up 22.9% versus a year ago. Sales in June rose in the Midwest, Northeast, and West, but...