The U.S. Dollar Index is climbing up to its highest level since 2002, which is getting a lot of currency traders excited. U.S. manufacturers are a lot less excited. A more valuable dollar makes it harder to sell products overseas. 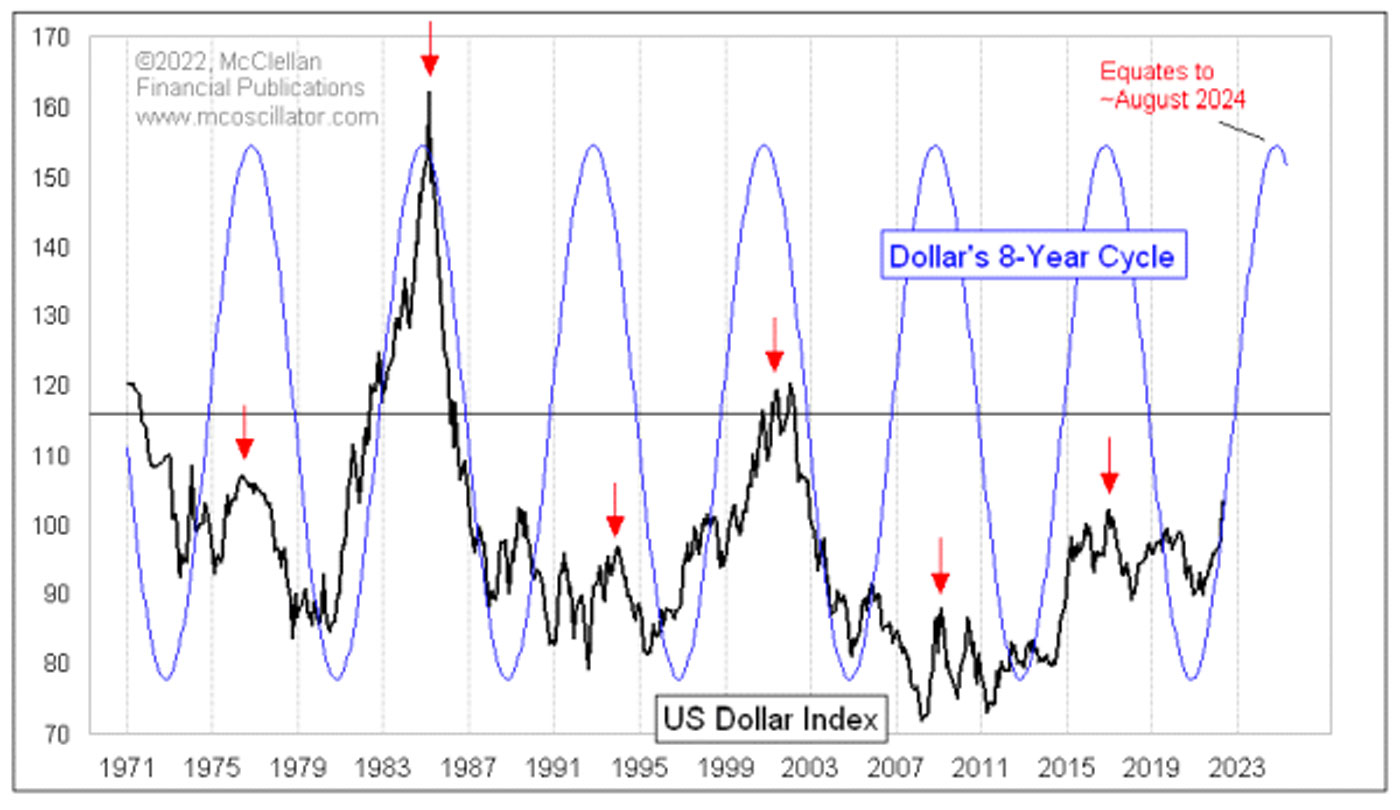 The dollar is rising even though the Federal Reserve is behind the curve on getting short-term interest rates up to where they should be. Low interest rates mean you get less return for keeping your wealth parked in dollars. But everything is relative, and other currencies’ interest rates are not beating out the dollar in this regard.

There is an important eight-year cycle in both the U.S. dollar and gold, as I have discussed previously. We are currently in the ascending phase of the dollar’s eight-year cycle, which should mean a continuing rise until a top, ideally due around August 2024. But don’t fall into the trap of thinking that it will be a uniform uptrend. The dollar’s actual movements are a lot messier than the pretty sine wave in Figure 1 implies.

What I also see in the chart is that the dollar’s “tops” seem to be more significant every other cycle. That would imply a 16-year cycle, of which the eight-year period is a half-cycle harmonic. The big dollar tops were in 1985, 2001, and 2017. This current cycle would be the weaker type, assuming that this pattern continues.

And that is a tough assumption to hang a lot of assumptions on. The dollar has only been freely traded since 1971, when President Nixon abandoned the Bretton Woods accords and allowed the dollar to float. Before then, it had been relatively fixed by international agreements, and any cyclical behavior would have been crushed by that governmental action. So we cannot really know what this cycle would have been like before 1971.

For now, it is fair to note that the U.S. Dollar Index seems to be in a strong uptrend and that this is occurring right on schedule. How far it goes in price terms is not something that this time cycle will tell us.

This is an edited version of an article that first appeared at McClellan Financial Publications on Apr. 28, 2022.