Sticking with a bullish 2019 investment outlook

There is no question the economy is slowing dramatically. Yet, contrary to popular market opinion, that has always been the bull case for equities in 2019.

The recent ISM manufacturing survey and monthly payroll data serve as confirmation of two factors negatively impacting economic activity: (1) the lagged effects of the Fed tightening from ZIRP (zero-interest-rate policy) to 2.5%, and (2) increased fear of a full-blown trade war with China.

As the weaker data fuel recession fear, it is difficult to remember that it is, in fact, the base case for our bullish view.

The slower economic activity gives the Fed room to fix the policy mistake(s) in 2018, like what took place following the sharp rise in rates in 1994 that almost drove the U.S. economy into recession. It was the two-rate-cut “tweaks” in July and December of 1995, due to a sharp slowing in economic activity, that kept credit, the economy, and the market moving higher. Current conventional wisdom holds there needs to be a major stock market decline to cause the Fed to cut rates in an emergency; but, the 1995 cuts came with the S&P 500 (SPX) up 20% and 34%, respectively. In addition, it is important to remember that an initial Fed rate cut following a tightening cycle has historically been a good buy signal for the markets.

A rate cut would not represent an emergency cut

We are not suggesting an emergency cut is needed to save either the economy or some financial institution in distress. We are simply looking for the Fed to be “less tight” given the recent market signals and softer data, especially on the inflation front.

Clearly, over recent weeks the markets have been screaming for the Fed to lower short-term interest rates given the two- and 10-year U.S. Treasury (UST) yields are trading below the lower bound of the fed funds target range (Figure 1). Until last week, the Federal Open Market Committee members have suggested they don’t need to move rates and can have patience for “some time,” but the markets are sending a very different message. 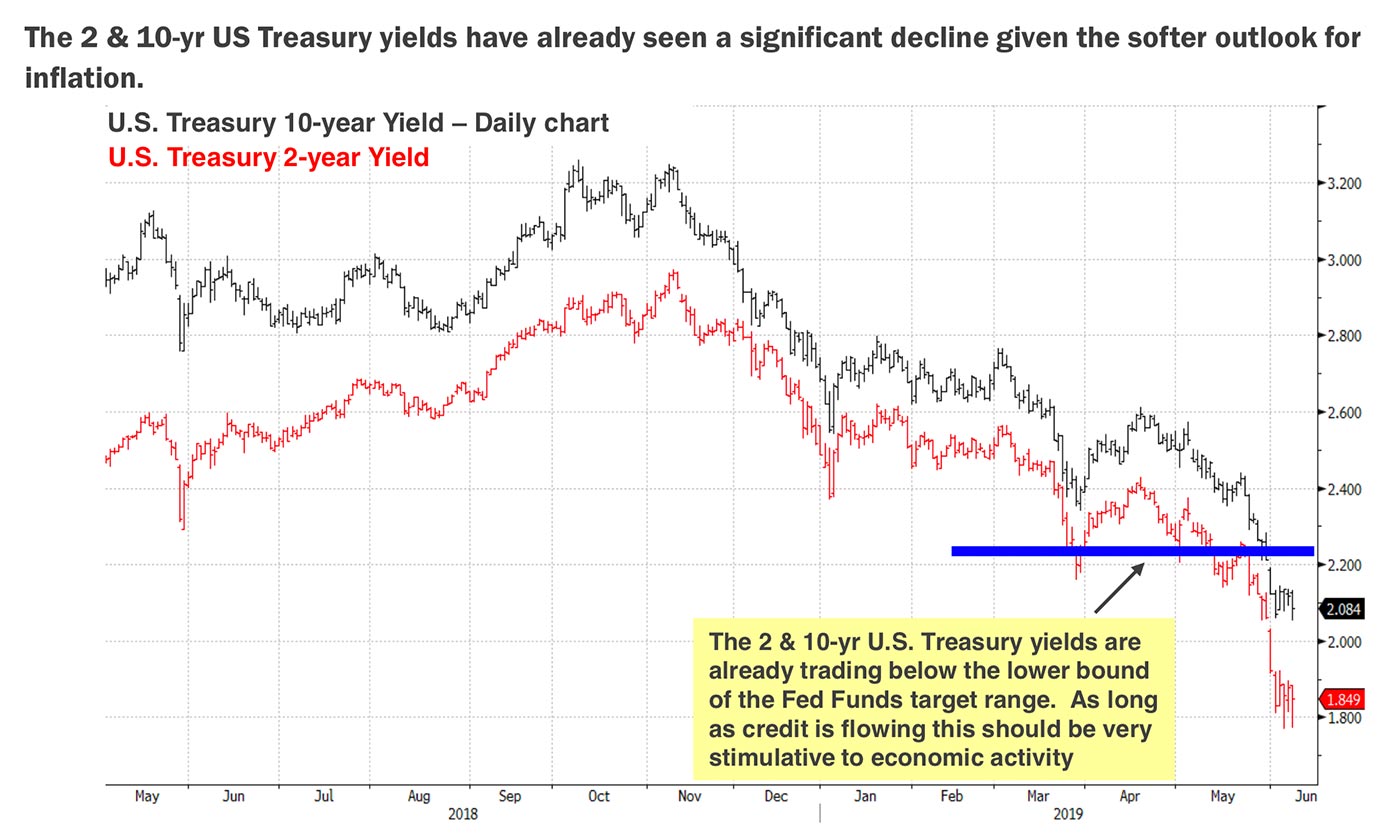 Is the Fed or the market right?
There is an old joke on Wall Street that the markets have predicted eight of the last five recessions. While that may be true, the Fed hasn’t successfully predicted a single one, so we trust the market a bit more. The good news is that the spread between Libor and the effective fed funds rate that drives bank lending remains positive, and the two-year/10-year U.S. Treasury curve that drives nontraditional bank lending (shadow banking) has not yet inverted and is experiencing a “bull steepener,” suggesting the recession countdown clock has not yet even begun (Figure 2).
FIGURE 2: INTEREST RATE OUTLOOK—FLATTENING CURVE “RESTEEPENING” 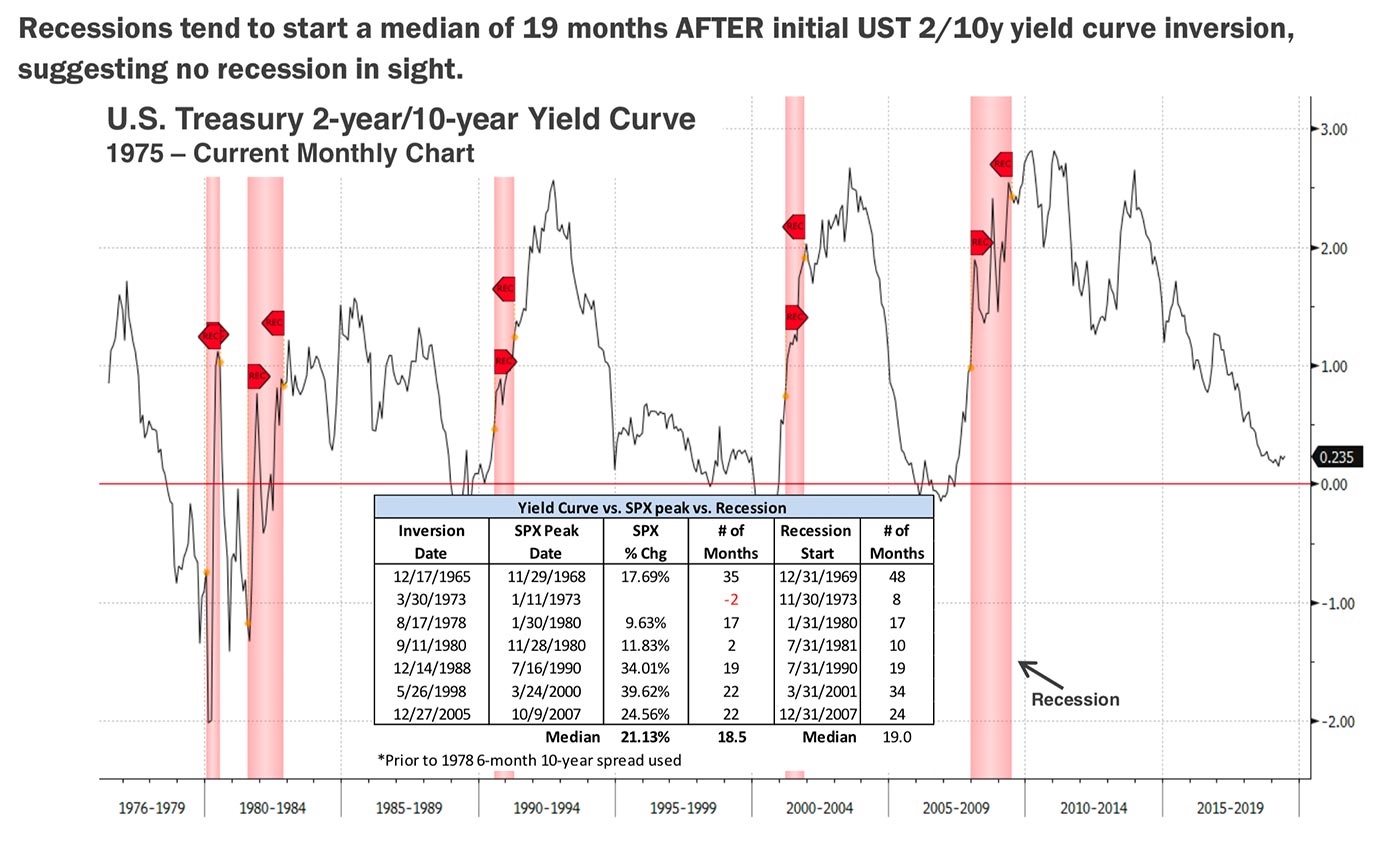 Most agree that in a consumption-based economy driven by credit, a credit shutdown needs to occur in order to have sustainably negative growth. If any cycle ever proved this to be true, it is the current one. We have had three distinct economic slowdowns based on global weakness that did not end in recession: the European Debt Crisis in 2011–2012, the Emerging Economy Commodity Crisis in 2015–2016, and the Trade War Crisis of 2018–2019. While all three periods experienced a sharp drop in the equity market on fear of a potential recession, none were associated with credit stress that would suggest a sustainably negative period of growth.
It is hard to have a credit shutdown absent significantly higher levels of credit stress

Our favored credit market indicators continue to suggest a benign environment and point to continued growth ahead:

Inflation is in decline, the Fed is likely to cut rates, the key 2–10 year U.S. Treasury yield curve hasn’t inverted and is “resteepening,” the economy is likely to weaken but reaccelerate in the second half of 2019, earnings per share should hit a trough in the current quarter, and valuations remain attractive given the current inflation outlook.

We continue to believe the current environment is like the one in 1995 just before the Fed cut rates to fix the policy mistakes at the end of the 1994 tightening cycle. This led to an economic rebound and continued market strength for years. We have no idea how the potential trade war is going to play out over the coming days/weeks, but we do believe the heightened conflict and recent economic deceleration is going to give the Fed even more reason to reverse its policy mistake last December. We reiterate our 2019 and 2020 SPX targets of 2,950 and 3,350, respectively.