With the Q4 2020 earnings season all but over, the financial sector delivered strong results.

According to FactSet, the financial sector had the third largest quarterly earnings growth rate in Q4, up 17.2%. This was a major improvement from initial earnings estimates back on Dec. 31, 2020, when analysts were forecasting an earnings decline of 9.4%. 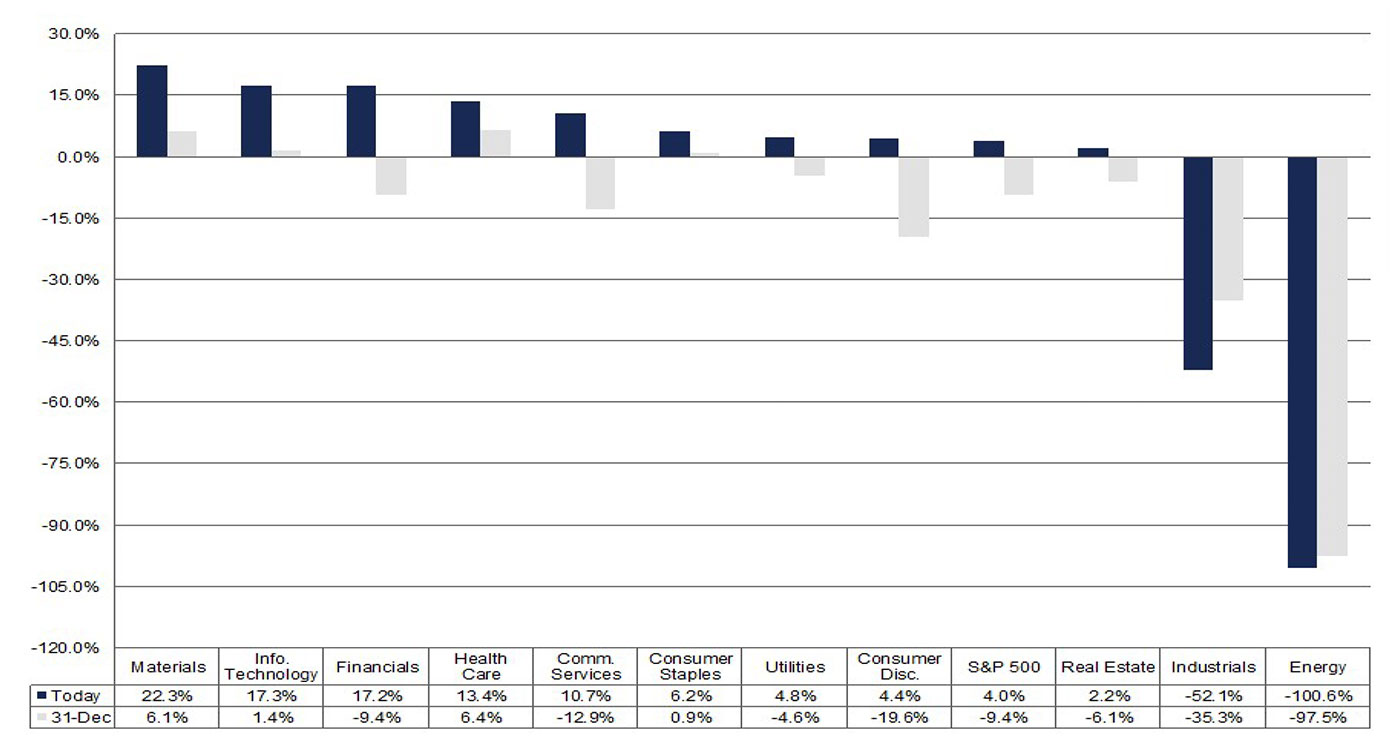 For the Q1 2021 earnings season, FactSet reports that the overall outlook is very positive from analysts, with the estimated earnings growth rate for the S&P 500 at 22.6%. This would mark “the highest year-over-year earnings growth rate reported by the index since Q3 2018 (26.1%).”

Embedded within this forecast is a robust estimate for the financial sector, with the sector’s 67.2% estimated earnings growth second only to the consumer discretionary segment. 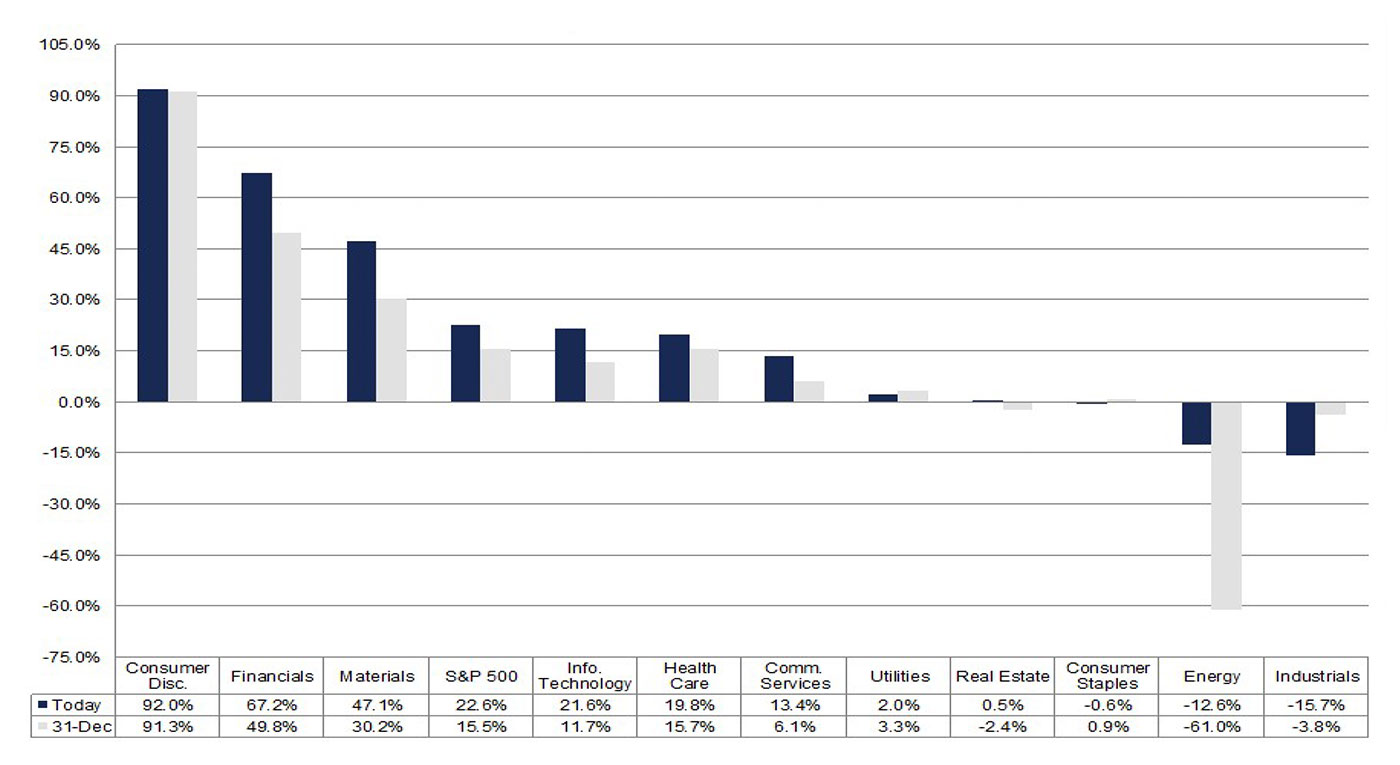 FactSet notes the following regarding the financial sector earnings outlook for Q1 2021,

“Rising interest rates are likely contributing to the increase in earnings estimates for companies in this sector, as the yield on the 10-year Treasury note has increased to 1.72% today from 0.92% on December 31. Overall, 48 of the 65 companies (74%) in the Financials sector have seen an increase in their mean EPS estimate during this time. …

“At the industry level, all five industries in this sector are predicted to report year-over-year growth in earnings: Consumer Finance (N/A due to year-ago loss), Banks (131%), Capital Markets (32%), Insurance (7%), and Diversified Financial Services (2%). The Banks industry is also projected to be the largest contributor to growth for the sector.”

Bespoke Investment Group recently cited some bullish trend factors for the financial sector and the banking industry, while noting that it has taken approximately 12-13 years for some major financial indexes and ETFs to finally recover from the financial crisis of 2007-09.

See Related Article: Bonds are not carrying their weight. Looking for an alternative?

“Financial stocks technically made a new closing high relative to the pre-GFC peak just prior to the COVID shock that hit stocks back in Q1 of 2020, but the move was barely a new high; this most recent high-water mark is a definitive breakout.

“Both struggled to breakout above prior highs the first time this resistance level was tested, while the Financials had two failed tests before finally breaking out this time around. What’s noteworthy in our view is that once the Nasdaq 100 did manage to break out to new highs, it kept on surging (~60%) for multiple years.

“While the Financial sector has had a big run and is overbought in the near term, we’re still in the early stages of a much bigger leg higher if it follows a similar path as the Nasdaq 100.  After all, since its 2007 high, the Financial sector is just barely in the green at this point.” 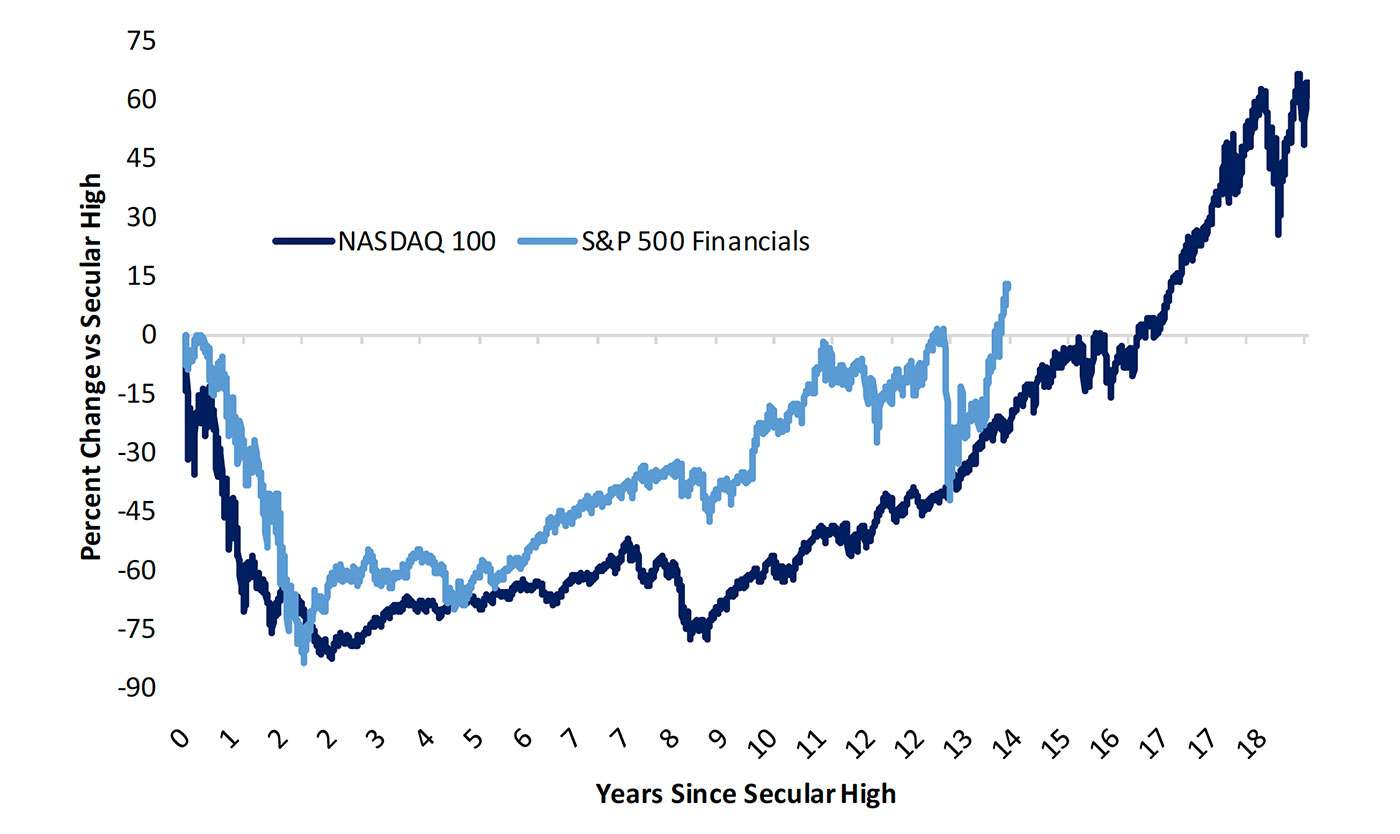