Bonds are not carrying their weight. Looking for an alternative?

The “Oracle of Omaha,” Warren Buffett, has been warning investors about bonds for the past decade:

It would have paid to listen and acted. The traditional 60% equity/40% bond mix worked extremely well for decades but has become a relic. In fact, bonds have become a drag on performance for the past decade.

It could get worse.

In our view, the secular bull market for bonds is ending

The traditional 60/40 worked so well for decades for a simple reason: The bond market was in a long-term secular bull dating back to the late 1980s. Bond yields then were in the double digits, offering extremely competitive returns to stocks, and as rates gradually fell, bond prices rose (bond prices and yields move inversely). So, bond investors benefited in two ways: high rates to start with plus rising bond prices as yields declined.

However, by 2010, as Buffett sounded the early warning, that successful combination (relatively high current rates plus declining yields, translating into rising bond prices) no longer existed. Rates were low (3.3% for the 10-year U.S. Treasury) and further price appreciation was limited. In fact, they may have moved to “the most dangerous of asset classes.”

In viewing the stock market or stocks, one analytical tool used by investors is the price-to-earnings ratio (P/E). They use this ratio to determine if a stock or market is moving to extremes in valuations, high or low. It is not hard to find a headline today stating that the “market is overvalued” or “it has gotten ahead of itself”—or even more dramatic, “the market is in bubble territory.”

Bonds do not have a P/E ratio to look at to determine levels of extremes. However, looking at a price-to-yield (P/Y) ratio is alarming and informative: 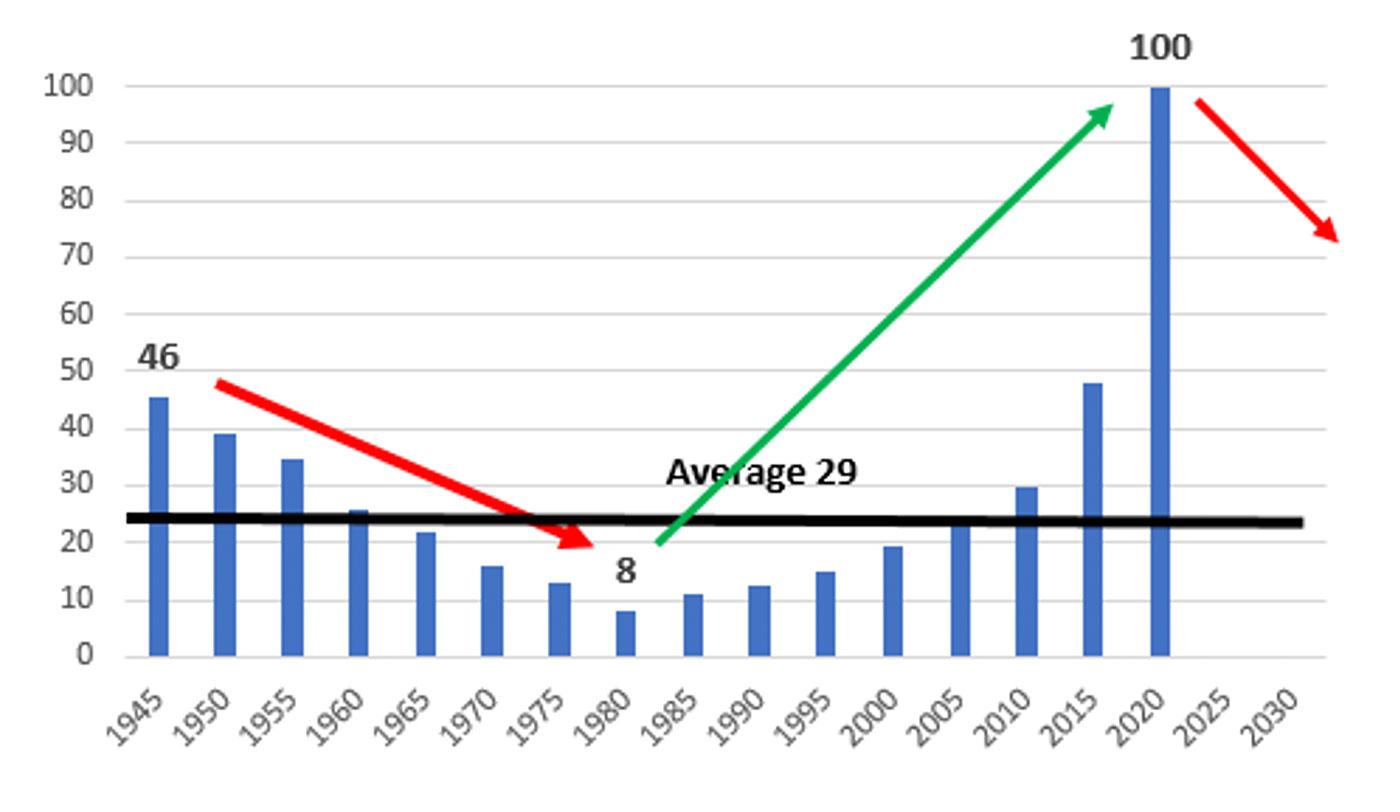 Even a move back to an average yield of around 3.3%, which could take years or even a decade, traps investors with a longer-term investment horizon in an asset class with little current return, plus little potential for bond price appreciation. In fact, it is the opposite scenario from what bond investors should be looking for. As yields rise, bonds prices will fall, creating a negative drag on the already low yields.

In Warren Buffett’s 2013 letter to Berkshire Hathaway investors, he noted that in his will he had instructed the trustee for his wife’s inheritance to allocate the cash he leaves 90% to equities (specifically an S&P 500 index fund) and 10% to short-term government bonds. This “formula” subsequently received many mentions in the financial media.

Placing 30% in rising-dividends equities should generate a rising stream of income, and, historically, rising-dividend stocks have held their value better in market downturns while participating in market advances.

How did it work over the past decade? 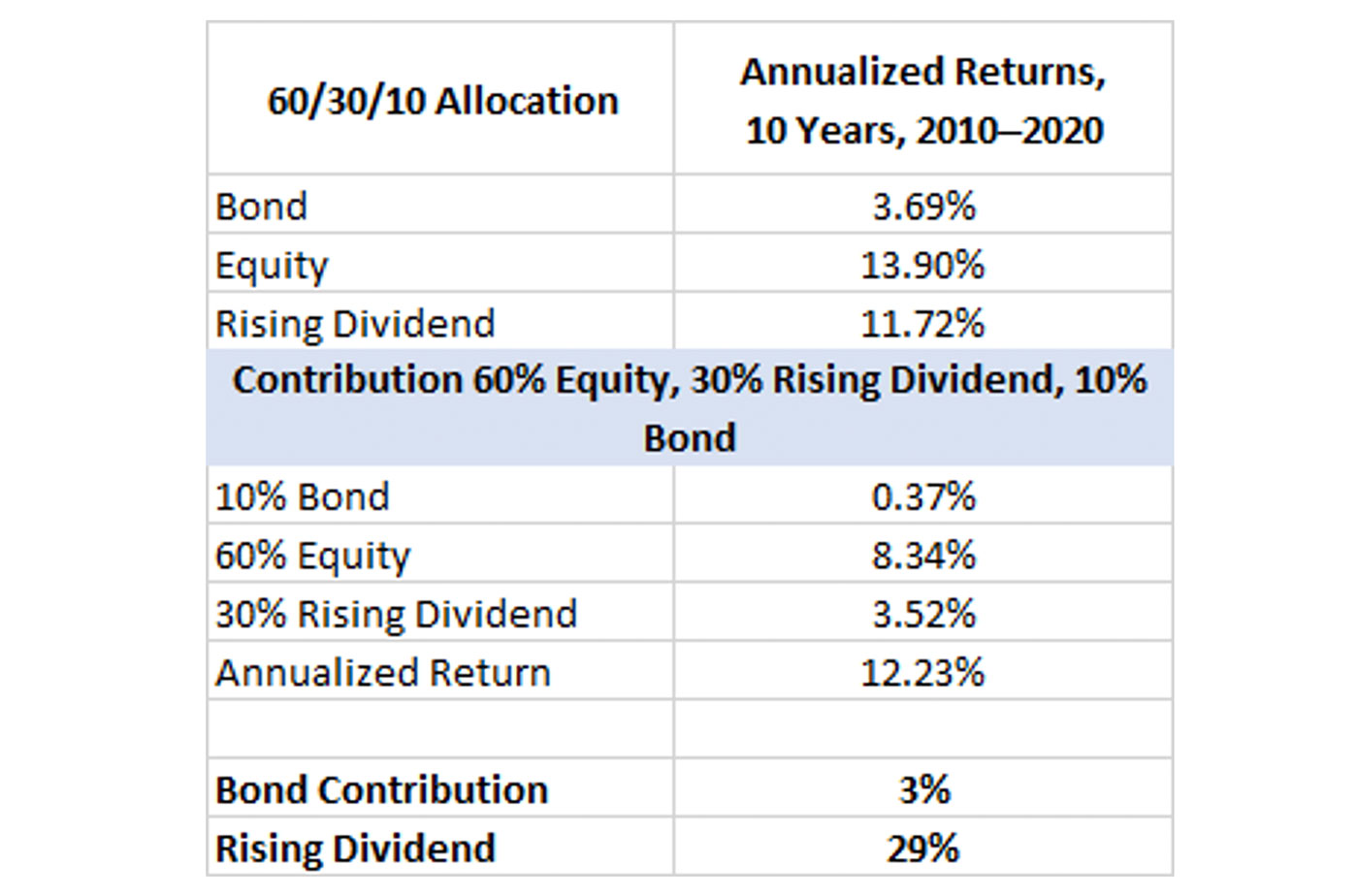 A 90/10 allocation may be suitable advice when your portfolio is in the billions or you have a long time horizon that allows you to comfortably weather bear markets. To make this concept more suitable for a broader segment of investors, a 60/30/10 mix would work best by adding a tactical overlay to the rising-dividend equity allocation. This would help to reduce risk in significant bear markets, while participating in the upside of bull markets.

Taking it a step further, another strong alternative would be to stick with the 60 equity/30 rising-dividend (including tactical overlay) allocations and substituting gold for the final 10% allocation. Total returns are similar, and gold can provide additional portfolio defense in falling equity markets.