Editor’s note: Tony Dwyer, U.S. portfolio strategist for Canaccord Genuity, and his colleagues author a widely respected monthly overview of market conditions, technical factors, and future market outlook called the “Strategy Picture Book.” The following provides an excerpt from their July 9, 2019, report on the macro market outlook.
Our fundamental thesis, which is driven by credit, remains constructive. The Fed is likely to cut rates at the end of the month and again toward year-end; the various internal measures of the market, such as the advancing versus declining issues, confirm the moves to record highs; and sentiment, while positive, is not excessive. While a solid case could be made for a period of S&P 500 digestion given the year-to-date gain of nearly 20%, we continue to believe the economy is unlikely to fall into recession, and we would not fight the Fed nor the tape.
Our positive fundamental thesis is still in place

Despite the continued fear of a trade war, flat yield curve, slower global and domestic growth, and the coming election, the positive influences that drive our core thesis still exist:

1. The equity market is most closely correlated to the direction of earnings. SPX (S&P 500) operating earnings per share (EPS) should end the year with growth over the mid single digits, which is in line with our year-old 2019 EPS estimate of $168 per share. Similar to prior nonrecession market crashes, the SPX should catch up to EPS direction.

FIGURE 1: S&P 500 MOVES WITH THE DIRECTION OF EARNINGS 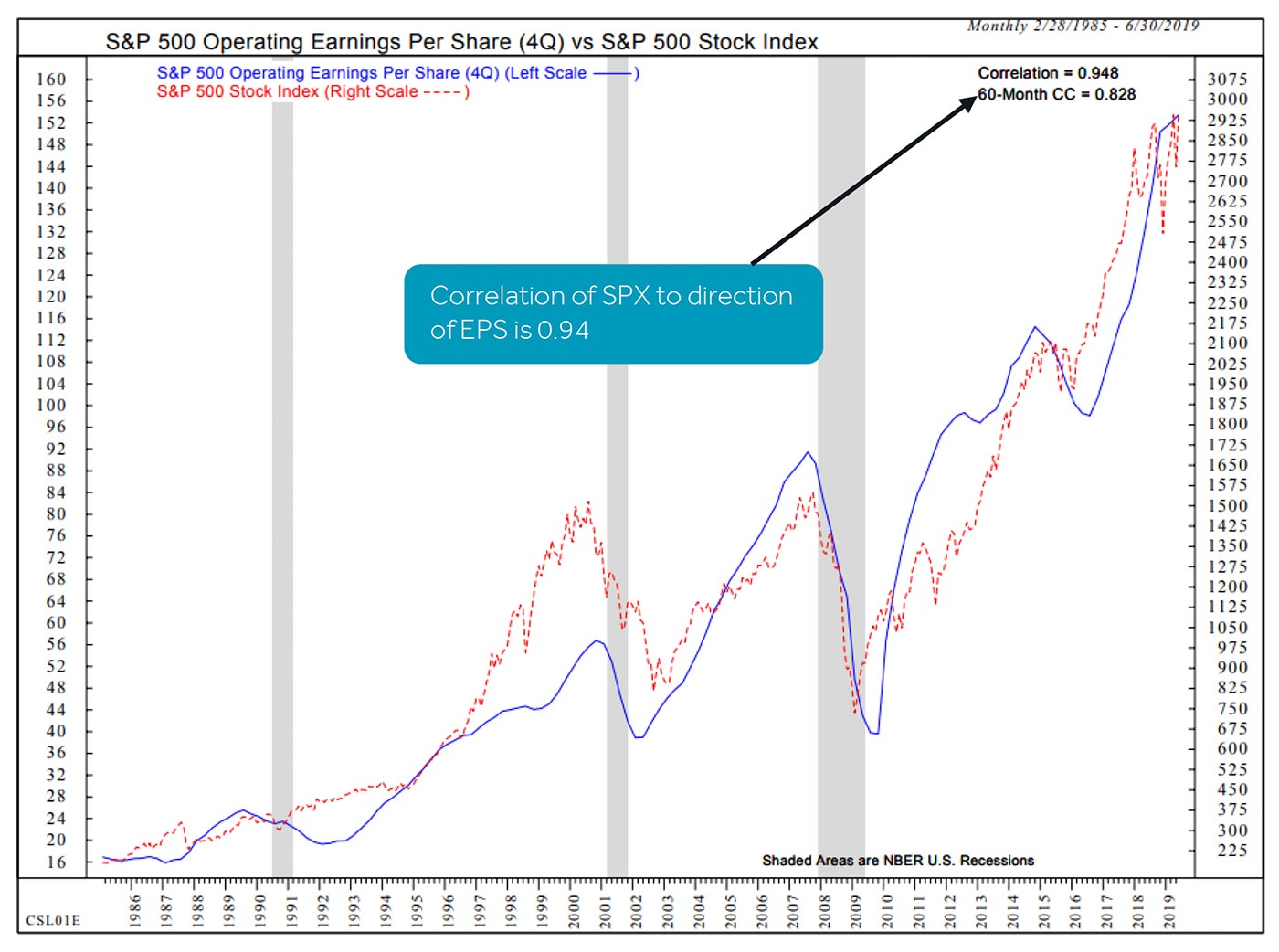 2. The direction of earnings is driven by economic activity, and, while slow, should reaccelerate given a drop in rates and no sign of stress in various non-Treasury metrics. We would typically be much more concerned regarding forward growth estimates if the drop in U.S. Treasury yields were accompanied by significant pressure in corporate debt spreads, tightening bank lending standards, and signs of stress in the Chicago Fed NFCI subindexes.

3. Positive economic activity is driven by the positive yield curve and the availability of money. Over the past seven cycles, the median time frame to recession has been 19 months after the initial date of inversion of the 2-10 year U.S. Treasury curve that drives nontraditional bank lending. Over the past three cycles, the lead time to recession has been 25 months, with a market gain of 32% first.

4. The slope of the yield curve and availability of credit are driven by Fed policy, which is likely becoming more dovish. The 2-year and 10-year U.S. Treasury yields have already seen a significant decline given the softer outlook for inflation. 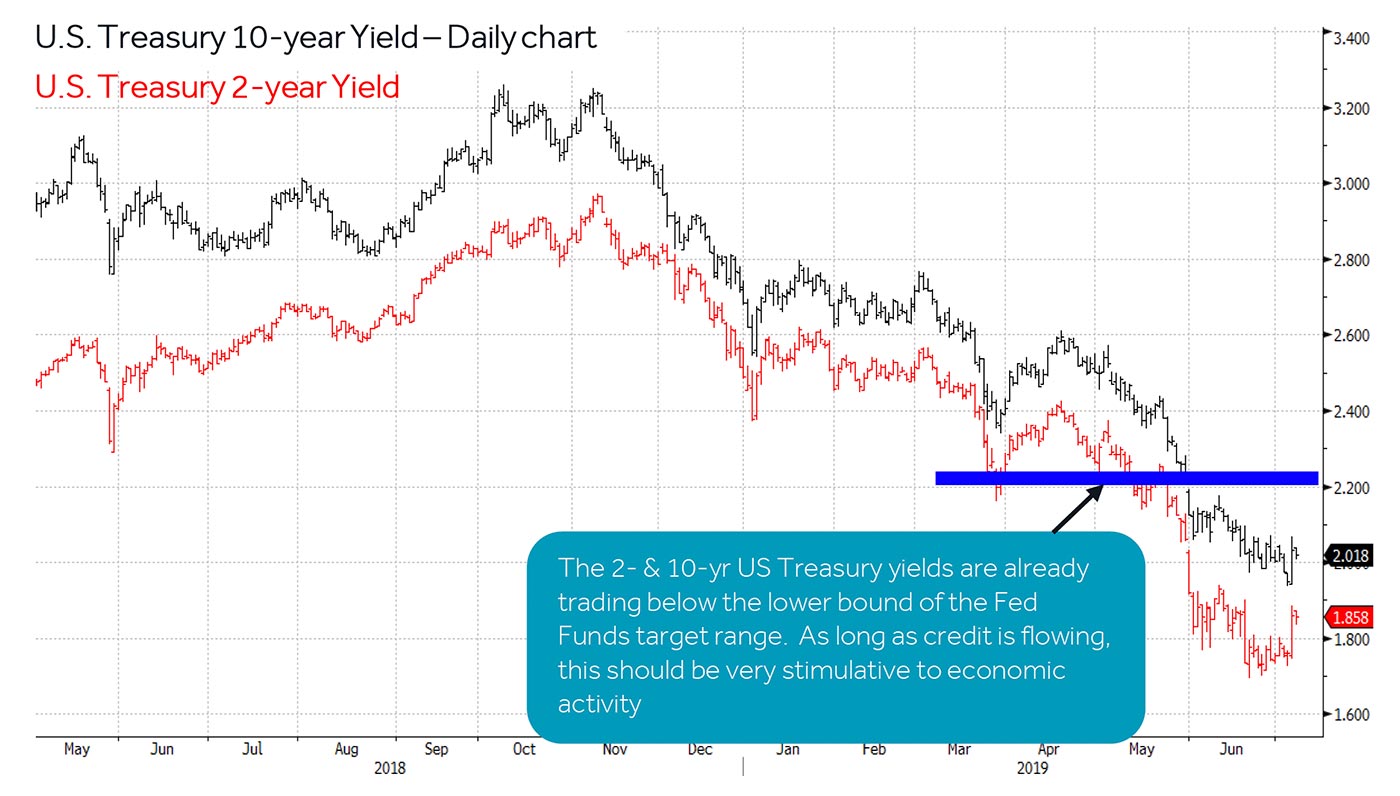 5. Fed policy is driven by core inflation, which should remain in the range of the past 20 years. The Fed’s favored inflation measures, the Core PCE and inflation breakevens, are currently well below their 2% average goal. Core PCE appears to have stalled, giving the Fed room to remain “dovish” even if growth is solid. 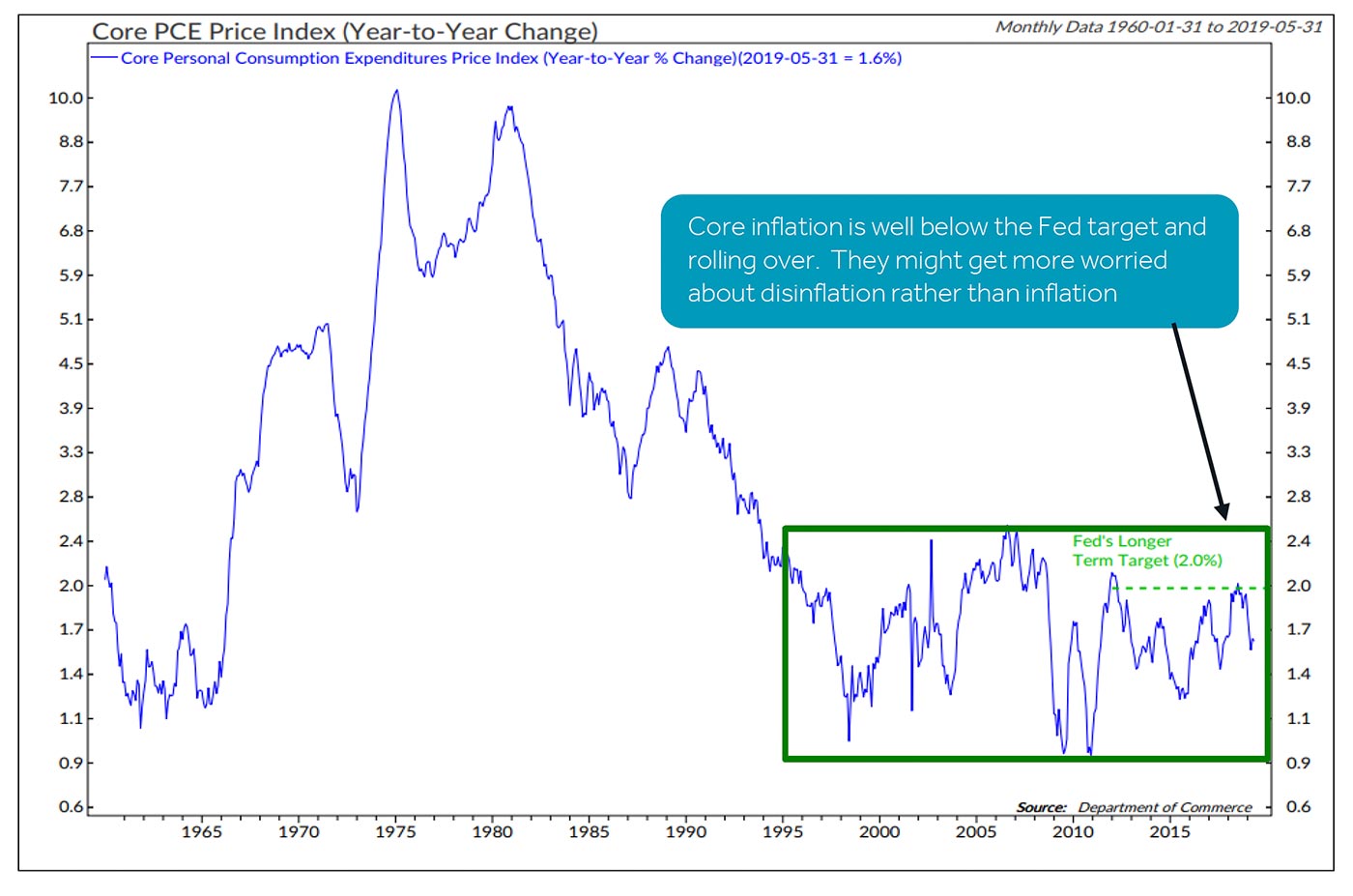 The S&P 500 has reached into overbought territory and has exceeded our 2019 target of 2,950, which suggests a period of consolidation and increased volatility may lie directly ahead. That said, our positive fundamental thesis, current valuation level, and intermediate-term tactical backdrop suggest any weakness should prove limited and temporary, and we would add exposure into any coming weakness. We remain focused on our 2020 SPX target of 3,350.