The muscle memory of the 20% S&P 500 (SPX) market crash in Q4 2018 has investors wondering if there is going to be another major drawdown following the sharp rally back and data showing slower momentum in the economy.

We are not overly concerned because (1) our core fundamental thesis remains positive, (2) our recession indicators continue to point to slower but positive growth, and (3) there is clearly a seasonality to the Atlanta Fed data (Figure 1).

FIGURE 1: ATLANTA FED GDPNOW HAS SHOWN ZERO GROWTH IN 4 OF THE PAST 5 YEARS 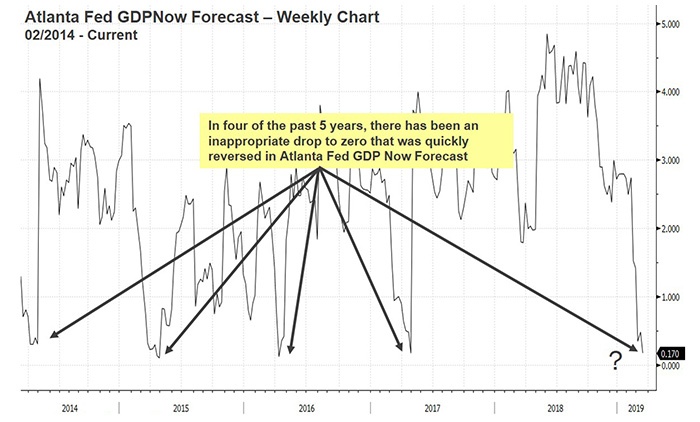 We believe the fear of a recession remains overblown

Based on 10 survey indicators, seasonally adjusted.

The current economic, market, and political environment reminds us of the 1994 Fed tightening cycle and macro backdrop that led to near recessionary growth in the first half of 1995. U.S. GDP growth was less than 1% in the first two quarters of 1995, which caused the Fed to cut interest rates in July and December after doubling rates the prior year. In addition, there was a special investigation surrounding the president, a potential trade war with the world’s second largest economy, and the market was on a low-volatility run following the 1994 internal bear market.

With near-zero growth, political drama, and double-digit first-half 1995 gains, you would think there would have been a significant drawdown, but the opposite took place as the SPX ended the year up over 30% without ever having a 5% correction. Our point is, the Fed policy shift was much more important to the market than the economic slowing, political drama, or potential trade war.

Summary of our view

The market is straight up nearly 20% since the Christmas Eve 2018 low and is now taking a slight break. Our positive fundamental core thesis driven by credit coupled with the history of “breadth thrust” and “rally requirement” indicators continues to suggest focusing on the intermediate-term potential new high in 2019 versus any temporary risk.

The Q4 2018 crash suggested the Fed made a mistake, and the ramp back indicates that the Fed’s pivot to a “patient” data-dependent stance fixed it. This is the third global “recession” scare this cycle, and while all three major corrections associated with these fear-based drops have been larger than anticipated, similar to 2011 and 2016, the pessimism again became too extreme. Absent an inversion of the yield curve that shuts down credit, the market pessimism following a nonrecession crash continues to set the stage for new highs in 2019.