Clients can be as fearful of losing portfolio gains as they are of steep portfolio drawdowns. Playing defense should begin when an offense is still on the field, starting with a comprehensive investment policy statement that spells out sound risk-management principles.

Many of us who began our careers in investment management in the early 2000s learned the valuable lesson of market risk. From the end of 1999 through the end of 2009, the S&P 500’s 10-year annualized return was -0.95%, including dividends.

Looking back, the 2000–2009 decade taught us a lot, but at the time it left many retail investors swearing off the stock market, and the watercooler talk among investment managers centered on wishing for better days.

I remember my colleagues sharing the thought in 2009, “I wish I could have started managing money in the 1990s.”

A little more than a decade later, the market has granted our wish. The S&P 500 just produced a decade worth of returns, making it feel as if we were managing money in the 1990s! 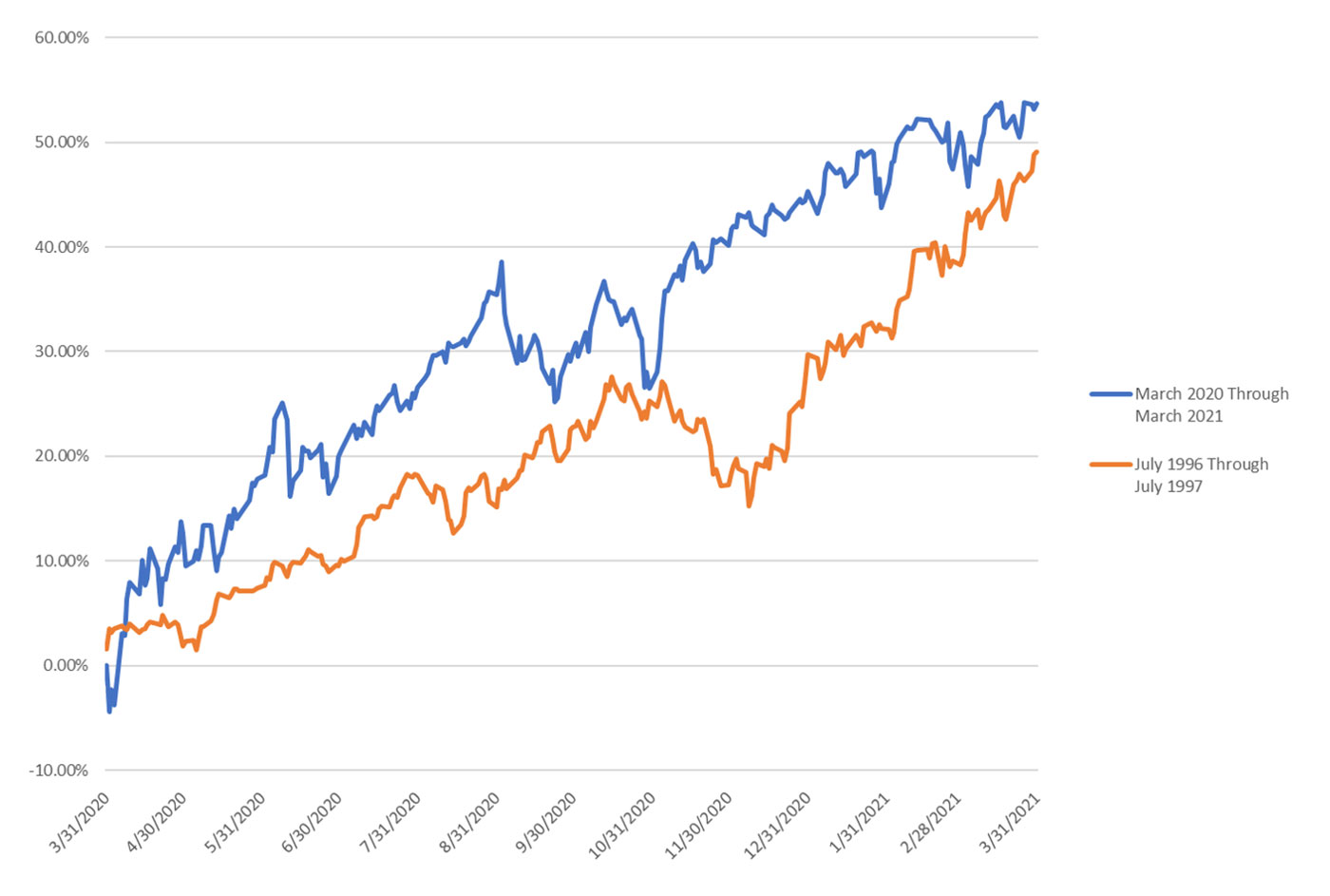 We’re all hardwired to believe that what’s too good to be true now can’t continue to be true into the future. The distrust in the sustainability of the S&P 500’s recent advance is palpable and understandable. Nonetheless, we haven’t encountered a hint of greed anywhere in our practice. Instead, we seem to regularly run into fear.

One year ago, we were managing our clients’ fear of losing money after an unprecedented market decline.

Today, we are managing our clients’ fear of losing money after an unprecedented market advance. The irony is not lost on me.

Much of our responsibility as proactive advisors is to help our clients make smart choices in the face of fear. Those who allow the fear of losing to keep them from playing the game are destined to come up short over time. Here are two things we’re doing to help our clients stay in the game.

Studying the historical performance of the S&P 500 can’t help us consistently predict its future performance.

If forecasting the market was that easy, we’d all be billionaires at this point. However, we can use the knowledge of market history to dispel a “bearish” bias, or fear about what lies ahead for the price of the S&P 500. History can be used to help our clients demonstrate greater behavioral adherence, which can help clients extract the value of sticking to their plan.

Take the statistic we shared earlier: The S&P 500 just gained 53.7% over the trailing 12 months. This unprecedented performance is leading many investors to consider whether they should “take the money and run.” However, when we analyze other big 12-month price thrusts for the S&P 500, we can see that the decision to take the money and run is generally remembered as a costly mistake.

The S&P 500’s forward one-year returns are illustrated in Figure 2 via the hypothetical growth of $1 from the end of each of the calendar months referenced.

We’ve all heard the phrase “past performance is no guarantee of future results.” Figure 2 illustrates that idea well—but perhaps in a way most investors would not expect.

That did not stop the Index from skyrocketing the next decade.

So, if you encounter a client who believes that the S&P 500’s gains over the last year are a surefire predictor of poor performance for the S&P 500 over the next 12 months, feel free to show them this chart and ask them if they’d like to reconsider.

The S&P 500’s price action for the previous 12 months is akin to a football team scoring a lot of points.

It’s rather safe to assume that the large majority of investors who’ve been putting their offense on the field during this period have built a tremendous lead, with a lead being defined as portfolio gains.

But, in the sport of football, no lead is safe if you don’t figure out how to play defense. Defense is what wins championships. Sorry, but Tampa Bay’s defense carried Tom Brady to yet another Super Bowl ring. In the world of portfolio management, playing defense is defined as having a prudent, intelligent, and defensible risk-management plan.

The point here isn’t to suggest that long-term investors need to put their defense on the field immediately, nor is it to predict that their offense is ready to lose possession. A lot of evidence suggests more points will be scored (i.e., the S&P 500 will continue to rise) over the remainder of 2021.

The point is to remind you that there is no better time to prepare your defense (your risk-management plan) than when your offense is on the field—especially when there is so much fear about the offense turning the ball over!

Proactive advisors have access to many ways to build a prudent, intelligent, and defensible risk-management plan. However, almost all risk-management plans begin with an investment policy statement (IPS). An IPS should define portfolio goals, objectives, and individual investor attributes, as well as detail an overall approach to risk management.

We must help our clients understand that they are going to have to take risk to earn the returns they need over the long term. But that means that it’s up to us to help effectively manage that risk, and we can do so by prioritizing investing policy that strives to produce competitive risk-adjusted returns.

Many financial advisors achieve this for their clients by using the services of third-party investment managers who manage money with a strong philosophy of risk management. Many third-party investment managers employ proprietary methodologies that include rules-based, quantitative strategies that can respond effectively to changes in the market environment. These strategies, most effectively used in a diversified portfolio combination, can help mitigate portfolio drawdowns during difficult market periods, while still taking advantage of periods of market opportunity.

Our firm identifies in the IPS concepts such as portfolio “triggers” and “adjustments.” A “trigger” can be viewed as a market event that causes portfolio rebalancing to take place. “Adjustments” then define what asset allocations may be most appropriate via rebalancing or adjusting exposure levels after a trigger occurs.

A document that is this detail-oriented should calm the most worried of clients. The certainty associated with diligent planning will almost always trump the fear associated with uncertainty. By working with your clients to update their IPS, you’ll be reminding them that their defense is ready to do its job before it needs to take the field, which epitomizes being proactive.

Remember, in the world of investing, the game never ends … the score simply changes. Given the continued uncertainty around the unprecedented COVID era and the volatility of market moves to both sides, it’s normal for most mass-affluent investors to be scared. Be proactive and address their fears head-on by leveraging the S&P 500’s history and bringing alive the one thing you can control: their investment policy statement.