How did your clients behave? 2020’s meaningful investment lesson

How did your clients behave? 2020’s meaningful investment lesson

It is my belief and experience that clients are far more willing to stick with an investment plan if a significant percentage of their portfolio incorporates active, or tactical, risk-managed strategies.

When the Kansas City Chiefs hung on to beat the Cleveland Browns on Jan. 17, 2021, and advanced to their third consecutive home AFC championship game, they did so despite playing the entire fourth quarter without their star quarterback, Patrick Mahomes.

Chad Henne, the Chiefs’ backup quarterback who replaced Mahomes for the entire fourth quarter, hadn’t completed a single postseason pass in his entire 11-year NFL career at the time. Yet with only two minutes remaining and the Chiefs facing critical third and fourth downs—and the outcome of the game still hanging in the balance—head coach Andy Reid and offensive coordinator Eric Bieniemy put the ball in Chad Henne’s hands and asked him to bring home the victory.

The entire world would have asked Henne to hand the football off on third and 14, or perhaps run a quarterback sneak on fourth and inches, but not Andy Reid. Reid wasn’t going to allow the “volatility” at the quarterback position to derail him from his game plan.

Instead, he stuck to it and called the exact same plays he would have if Patrick Mahomes was his quarterback: He asked Chad Henne to drop back and throw the football twice in the most critical of moments. In doing so, he not only helped the Chiefs secure the victory, but he also provided portfolio managers, financial advisors, and investors a perfect analogy for the greatest investing lesson that 2020 can teach us—the value of sticking to your plan when times get tough.

Looking back at 2020, it was basically an “everything up” year across the traditional investable universe. Almost all of the broad players you could have chosen to put on the field at the end of 2019 performed well in 2020. U.S. stocks and precious metals led the way, gaining more than 20%, and even the total U.S. bond market index and global bonds (unhedged) index gained 7.6% and 9.8%, respectively. On the surface, it should have been impossible not to make money in 2020, but we all know that’s not realistic. It just wasn’t easy to keep the players on the field for all of 2020.

Investing, life, and even football have an element of path dependency associated with them. For example, suppose Patrick Mahomes had gotten injured in the first quarter of the game, missing three full quarters of football, rather than just the fourth quarter. It’s fair to then question whether Andy Reid would have stuck to his game plan and whether the Chiefs would have won.

This is analogous to what the investing community had to deal with last year. The average investor’s portfolio got off to a rocky start in 2020, the equivalent to Patrick Mahomes getting hurt in the first quarter. That made it incredibly challenging to capture the asset classes’ full return in 2020. For example, an equal-weight portfolio of the five asset classes shown in Figure 1 would have been down 14.3% just through the first quarter of the year. (Good luck finding the answer to that type of volatility and subsequent fast reversal in a typical backtest!)

We can all probably remember late March 2020 like it was yesterday. Panic was in the air; friends, family members, and clients were calling and texting; and uncertainty regarding the future performance of all asset classes was at its highest level in more than a decade. All bets were seemingly off. The emotional attraction associated with doing something different with our portfolio, sending a few of the underperforming players to the bench, was incredibly difficult to disregard.

But disregarding emotions and keeping faith in your plan was the right thing to do. The volatility of March 2020 was indeed the greatest trick the market ever pulled—because it fooled so many investment managers, financial advisors, and investors into wondering whether they should be doing something different with their portfolios. The right answer was in front of us all along—sticking to our plan when the times got tough. COVID-related “investment bifurcation” is real, and it’s exemplified by the probable disparity in returns between Investor A, someone who stuck to their investment plan, and Investor B, someone who decided to chart a different course in the second quarter of 2020. It’s why teaching our clients the importance of behavioral adherence will always be the name of our game.

One of the biggest impacts we, as proactive investment managers and advisors, can have on our clients’ financial well-being is to dissuade them from becoming Investor B and charting a different course when the water gets rough.

One of the ways we can do so is to design portfolios and draft investment policy that our clients can stick with over the full market cycle, no matter how volatile things get. This does not mean that we prioritize a conservative portfolio stance, effectively reducing the probability of earning the minimum annualized return that’s necessary to achieve our clients’ stated financial goals. We must help our clients understand that they are going to have to take risk to earn the returns they need over the long term. But it does mean that it’s up to us to manage that risk, and we can do so by prioritizing investing policy that strives to produce competitive risk-adjusted returns. This is our responsibility in order to best help our clients extract the value of sticking to their plan. For illustrative purposes, let’s look at how some specific, relatively well-known approaches performed in 2020.

There are numerous investment strategies and approaches that fit the definition of tactical asset allocation, and there are many third-party investment managers who employ their own specific methodologies.

One of my favorite proxies for illustrating active investment management is what I call the “12MA.” It uses the 12-month simple moving average as a risk-on/risk-off switch (based on moving-average “crossovers”) for allocating to the SPDR S&P 500 Index Fund, ticker symbol SPY. This is a sort of variant of Meb Faber’s Ivy Portfolio. It’s simple, straightforward, and relatively easy to execute—and, historically, it has been an effective way to produce favorable risk-adjusted returns.

The 12MA approach returned 14.7% in 2020 with a maximum drawdown of just under 8% (maximum drawdown is calculated using monthly closing prices in Figure 1 for both strategies shown). The 12MA moved from “risk-on” to “risk-off” at the end of February, so it was in cash for one of the worst calendar months in the history of the S&P 500. Timing luck? To some degree. But following such an approach through multiple market cycles over the long term is not luck—rather, it is a simple, disciplined methodology.

Dalio’s ‘All Weather’ portfolio lives up to its name

Ray Dalio’s “All Weather” ETF portfolio (from his firm Bridgewater Associates) weathered the 2020 storm incredibly well. The fundamental strategy allocates to a blend of long- and intermediate-term U.S. Treasury bonds, U.S. equities, gold, and other commodities.

The portfolio returned over 16% in 2020 (based on simulated returns of the strategy’s basic components), with a maximum drawdown of just 3.9%. Ironically, this portfolio has underperformed a traditional 60/40 allocation over the last five-and 10-year periods. It was easy to believe the strategy was left for dead given its large allocation to U.S. Treasury bonds. But managers, advisors, and investors who simply stayed the course with this strategy reaped the rewards in 2020. Remember, you can’t experience the “gain” of a strategy unless you stick to your plan through the “pain” of the strategy. 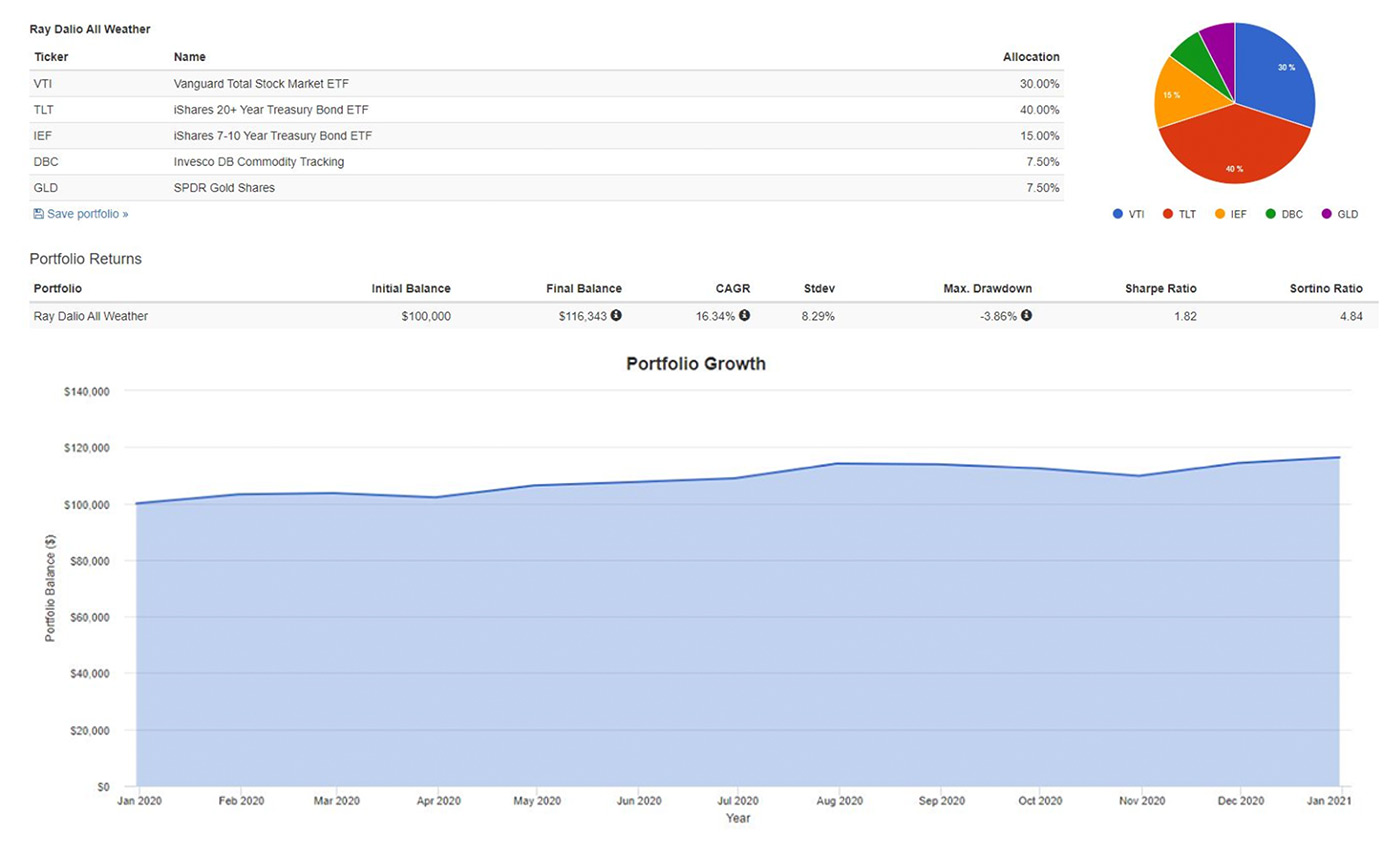 The RPAR Risk Parity ETF (ticker symbol RPAR), which debuted in December 2019, equalizes risk across the asset classes held in the portfolio to ideally minimize volatility, while not sacrificing too much return. It accomplished exactly that in 2020, returning 19.4% with a max drawdown of 6.5% 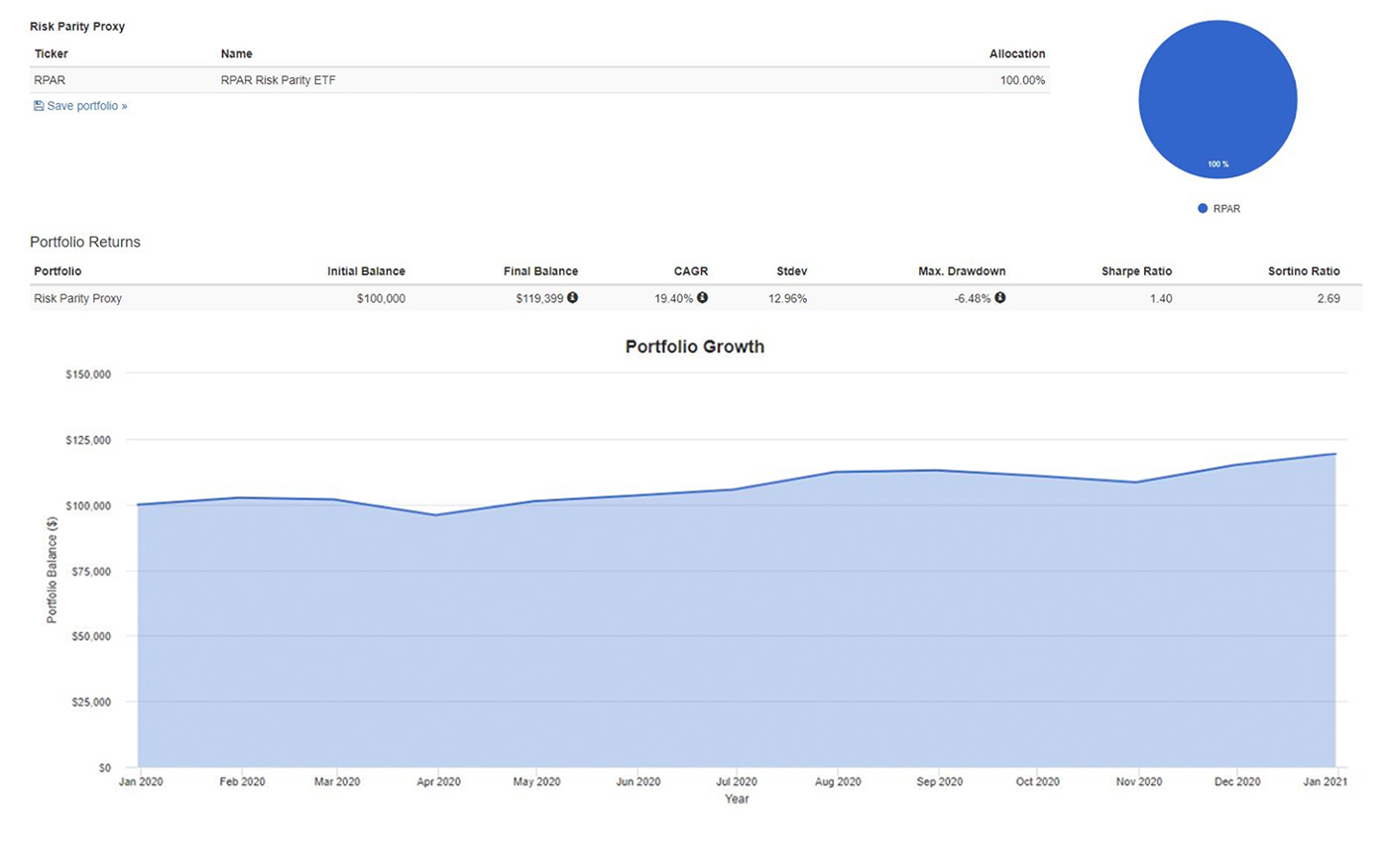 For clients of my firm, Nerad + Deppe Wealth Management, we emphasize pairing active and passive investment strategies based on the historical lack of correlation between the two when long-term investors need it the most—during volatility storms. The intent is to smooth our clients’ returns over the full market cycle in order to maximize their behavioral adherence—that is, their ability to stick to their plan when times get tough.

Take tactical asset allocation as an example. This approach is expected to perform well during primary trends for the S&P 500, no matter whether the direction of the trend is up or down, and is expected to underperform during sideways or trendless reversal markets. Since passive investing approaches are expected to perform well during primary uptrends and sideways, trendless reversal markets, and are expected to underperform during primary downtrends for the S&P 500, there’s a probable synergy in pairing tactical asset allocation with passive investing strategies.

Taking 2020’s volatility storm as the most recent example, it was a lot easier for a long-term investor to stick to their plan, or behave, during March. The tactical-asset-allocation portion of their portfolio was able to capably manage through the market decline. This was also the case in the 1970s, 2000–2003, and 2008. Unless the volatility storms of the future are completely different from the volatility storms of the past, the synergy between active and passive approaches will continue to pay dividends.

Putting it all together

2020 taught us all the importance of sticking to your plan during the most challenging of times. We must find what works for us in the world of investing and then plan to stick to it with maniacal discipline.

No matter the risk-managed strategy an investment manager, financial advisor, or investor pursued in 2020, it is fair to say they probably all made money if they stuck to the plan for the entirety of the year. However, all investment plans are not created equal, and allocating 100% of a portfolio toward any one single approach, asset class, or security is a recipe for disaster over the long term.

Given the current valuations across stocks and bonds, where both asset classes are near all-time highs and where it appears stock valuations are a derivative of all-time-high bond prices (i.e., all-time-low interest rates), we believe it’s difficult for long-term investors to expect simple asset-class diversification to be of great benefit to their portfolios. As an alternative, we believe diversifying investment strategies within asset classes may be a more equitable approach as we look forward.

We urge other financial advisors to conduct their own due diligence on the many strategic and tactical approaches available from many third-party investment managers. “Diversification” is always prudent, and it goes far beyond the typical usage of the word. As proactive advisors, we should explore diversifying clients’ portfolios across asset classes, securities, and investment strategies in order to strive to produce strong risk-adjusted returns into the future. This makes it easier for clients to exhibit successful investing behavior and stick to their well-crafted investment plan. That’s the recipe for success in 2021 and beyond.