Good old safe and reliable consumer staples—the sector that was down a stinking 10% for the rolling year ending May 15, 2018.

The same sector that has super boring companies that produce food, toilet paper, beverages, household cleaning products, etc.—the stuff that we “always need” and that is marketed with exorbitant advertising budgets.

What can a money manager possibly do to find value in such a lackluster, lagging sector in the current market? The answer is in the trailing returns and/or spread analysis of the consumer staples sector compared to the S&P 500 (used in this example as a broad-based representation for the overall stock market).

Many of us remember the giddiness of the markets (especially the NASDAQ) in the latter parts of 1999 and early 2000. The latter part of 2017 and early part of 2018 felt similar. The spread ratio of SPY/XLP has shown a bullish nod to SPY since February 2016 and currently has a value of 5.48 (calculated as the price of SPY divided by the price of XLP).

See Related Article: How rare was the February 2018 ‘trigger event’?

However, here is the other part of the SPY and XLP story that is very relevant through all market conditions since 1999: When the trailing 52-week return of the S&P 500 (SPY) has been greater than the XLP, it has indicated a strong overall market. When the opposite has occurred, it has been a very opportune time to retreat from the markets and sit in a money-market fund or the ETF SHY (iShares 1-3 Year Treasury Bond ETF).

With that simple formula, if one had bought and sold SPY since Dec. 31, 1999, using the trailing return indicator, one would have returned 206% versus the SPY buy-and-hold return of 159% (see Figure 1). 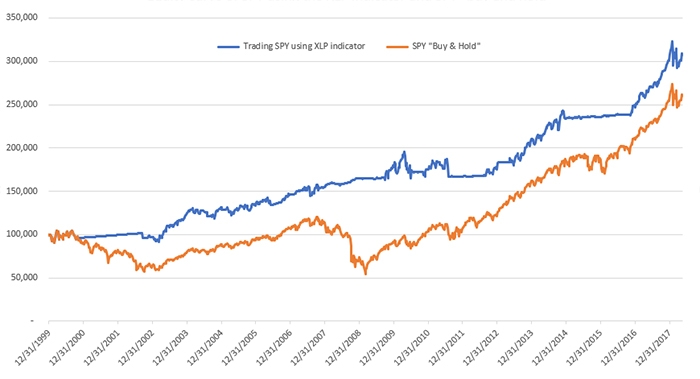 The consumer staples sector is not only something that provides products essential to our modern daily lives, but it can also be our friend in market analysis.