According to the Q2 tracking study conducted by The Conference Board and The Business Council, CEO confidence has reached the highest level since the study started in 1976.

The press release from The Conference Board reports CEO confidence “improved further in the second quarter of 2021, following a sharp increase in Q1. The measure now stands at 82, up from 73.”

“‘This quarter’s survey marks a remarkable turnaround from a year ago—when CEO confidence reached a nadir of 34 at the height of COVID-19’s first wave,’ said Dana Peterson, Chief Economist of The Conference Board. ‘For CEOs, the challenge of navigating a once-in-a-century pandemic is receding, as the focus turns to hiring and investing to compete in an economy poised to see the fastest growth in decades over the months ahead.’”

FIGURE 1: THE CONFERENCE BOARD MEASURE OF CEO CONFIDENCE

Sources: The Conference Board, The Business Council, National Bureau of Economic Research

The NFIB Small Business Optimism Index basically held steady in May, with five of the 10 Index components improving, three declining, and two remaining unchanged. The Index was reported at 99.6, a modest decline of 0.2 points from April.

According to the NFIB’s press release, “May saw a slight pause in the recovery of small business optimism after steadily increasing each month in 2021. The economy is doing very well currently, and owners are scrambling to take advantage of it by hiring and investing. The first five Index components in the table are at historically high levels.”

One concerning factor was the high degree of unfilled job openings, with 48% of small businesses reporting open jobs. The NFIB said job creation plans over the next three months rose to a net 27%, up six points. However, employment uncertainty and inflation concerns weighed on future expectations for overall business conditions, which showed a significant decline from April.

On the plus side, the NFIB reported,

“Fifty-nine percent of owners reported capital outlays in the last six months, up two points from April. Of those making expenditures, 44% reported spending on new equipment, 24% acquired vehicles, and 16% improved or expanded facilities. Six percent acquired new buildings or land for expansion and 13% spent money on new fixtures and furniture. Twenty-seven percent are planning capital outlays in the next few months.” 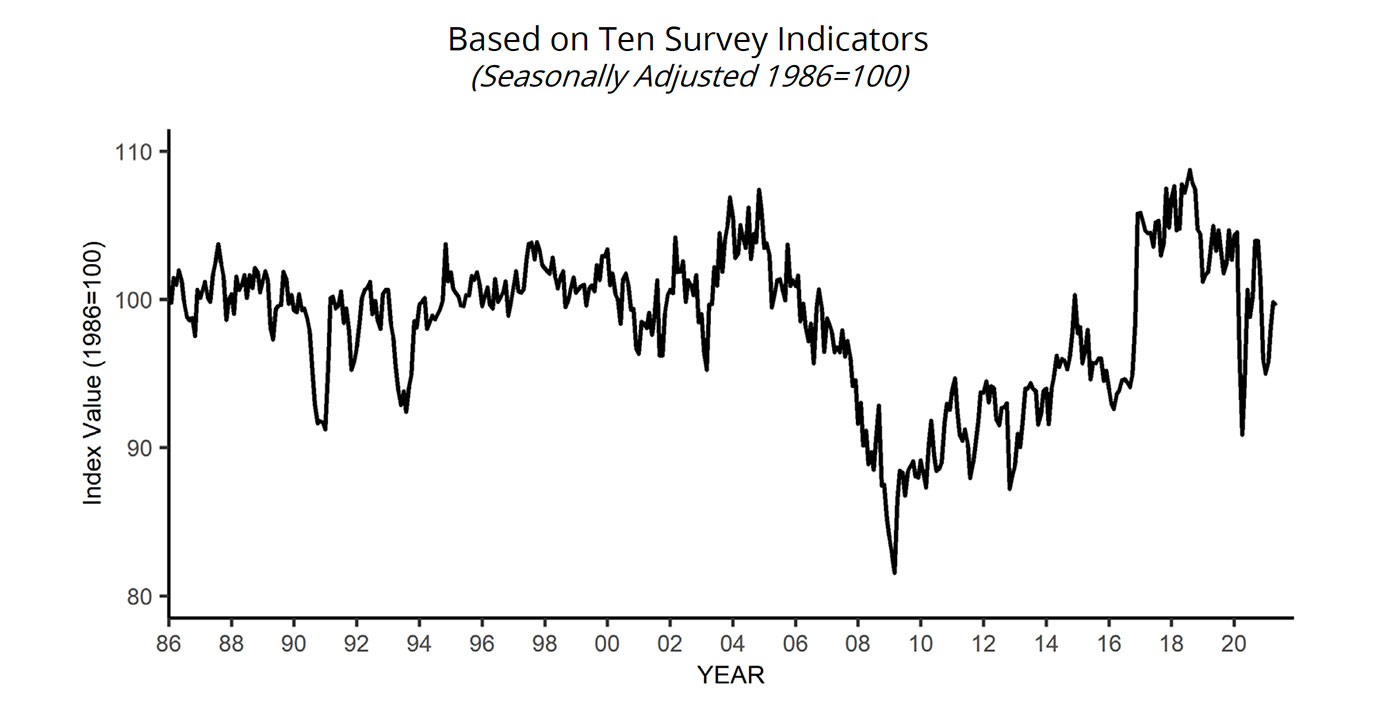 Optimism for companies of all sizes is being fueled by many factors: the broad reopening of state economies, with most restrictions now lifted; an improving employment picture (despite some worker shortfalls and expected rising wages); favorable interest rate conditions; improved operating and technology efficiencies; enhanced plans for capital expenditures; and pent-up demand for products and services from both consumers and the business community.

McKinsey and Company notes in a recent article that while there will be a long-lasting impact of digital shopping adoption, in-person shopping is beginning to make a comeback. This should further help in the difficult recovery process for Main Street businesses.

“Shoppers overwhelmingly took to digital channels with the onset of the pandemic. Now, as the number of COVID-19 cases is declining and lockdowns are lifting in some countries, consumers may be eager to step away from the screen and experience shopping in person again.”

FIGURE 3: DIGITAL ADOPTION IN EUROPE AND THE U.S. 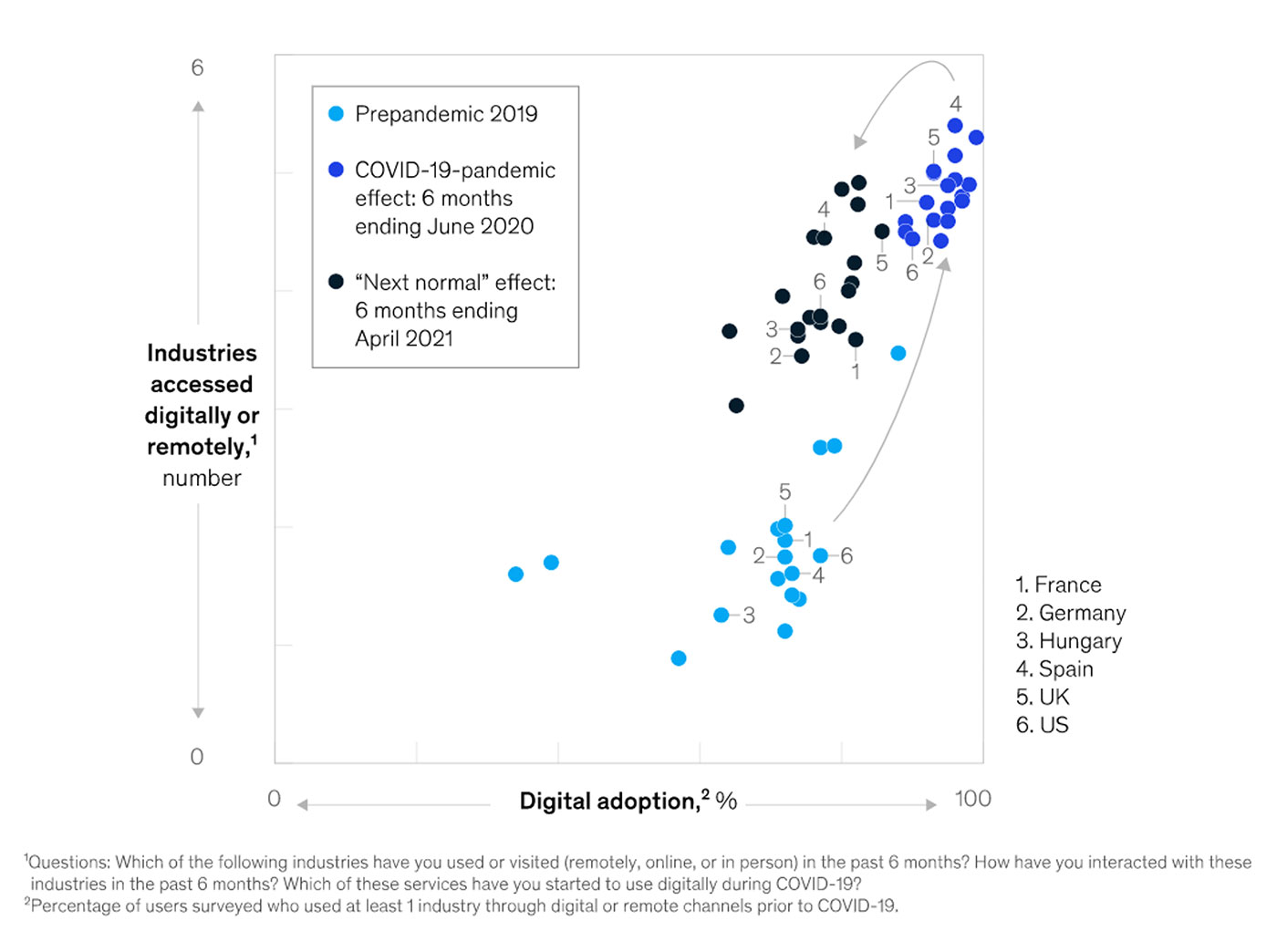 McKinsey also notes that companies are working to best adapt to their employees’ desires for more of a hybrid model for balancing in-person and remote working. They report that their research indicates that “52% of workers would prefer a more flexible working model postpandemic.”

The clear preference on the part of workers, and the efficiencies many employers have experienced in new remote workplace practices, are reflected in how employers broadly see an evolving workplace environment. 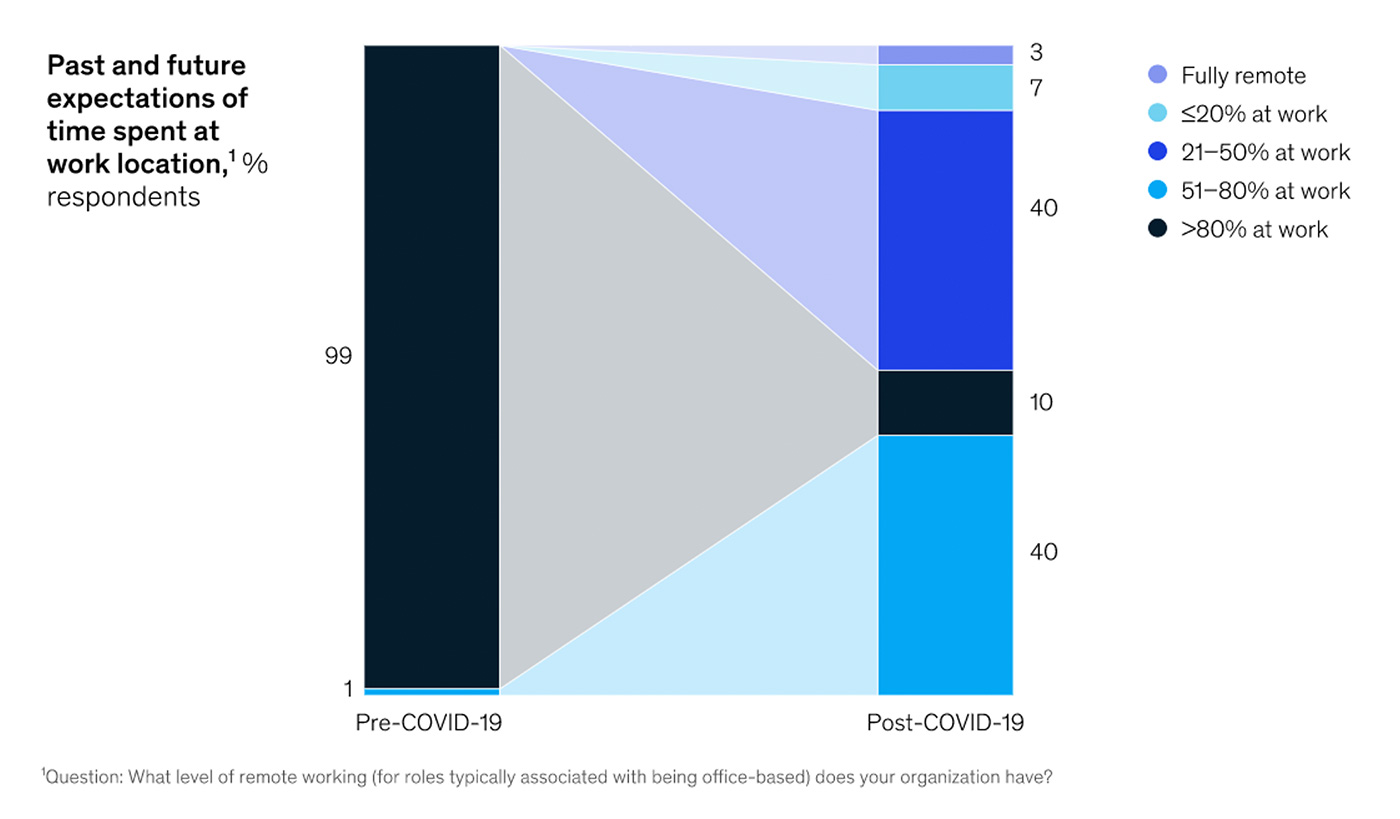