A bullish, quantitative market outlook for 2020

It’s that time of the year again—time to make resolutions, budgets, or (in the financial business) an outlook for the coming year.

That made 2019 the first year of a new bull market run. Historically, those years are powerful and, therefore, a forecast for double-digit gains was not a terribly difficult call. But now we are moving into year two of a cyclical bull within a longer-term secular bull—and market calls are more difficult.

Most forecasts are qualitatively driven. They will be strategists’ views and opinions on fundamentals, such as corporate earnings and sales forecasts, where the economy is in a typical business cycle, and what the Federal Reserve will or will not do.

Our approach is quantitative. It looks at historical data to arrive at a consensus or probability of what might occur.

Call it a “Mark Twain forecast,” based on the famous quote often attributed to him: “History doesn’t repeat itself, but it often rhymes.”

Below is a short list of the major quantitative data points that could have the largest impact on 2020 performance.

2. The probabilities of another cyclical bear market occurring within 24 months since the last one is low in secular bull markets, while higher in secular bear markets. In those 11 cases (no bear market in year two), the average second-year gain is 17.2%, or a goal of 3,700 for the S&P 500.

3. On Sept. 11, 2019, the market generated a rather unusual bullish breadth thrust signal. That occurs when the 10-day total of advancing stocks is at least 1.9 times greater than the 10-day total of declining stocks on the New York Stock Exchange, with a minimum of 50 calendar days apart. (Repetitions of the signal in shorter time frames are ignored for statistical purposes.) The signal indicates that the market has momentum, which normally pushes prices higher in the coming months and longer. Over the past 46 years in secular bull markets, 28 bullish breadth thrusts have occurred. Fifteen months later, which in this case would be Dec. 11, 2020, the S&P has had an average gain of 22.9% (27 of the 28 cases were positive). This latest breadth thrust could push the S&P 500 to 3,690. 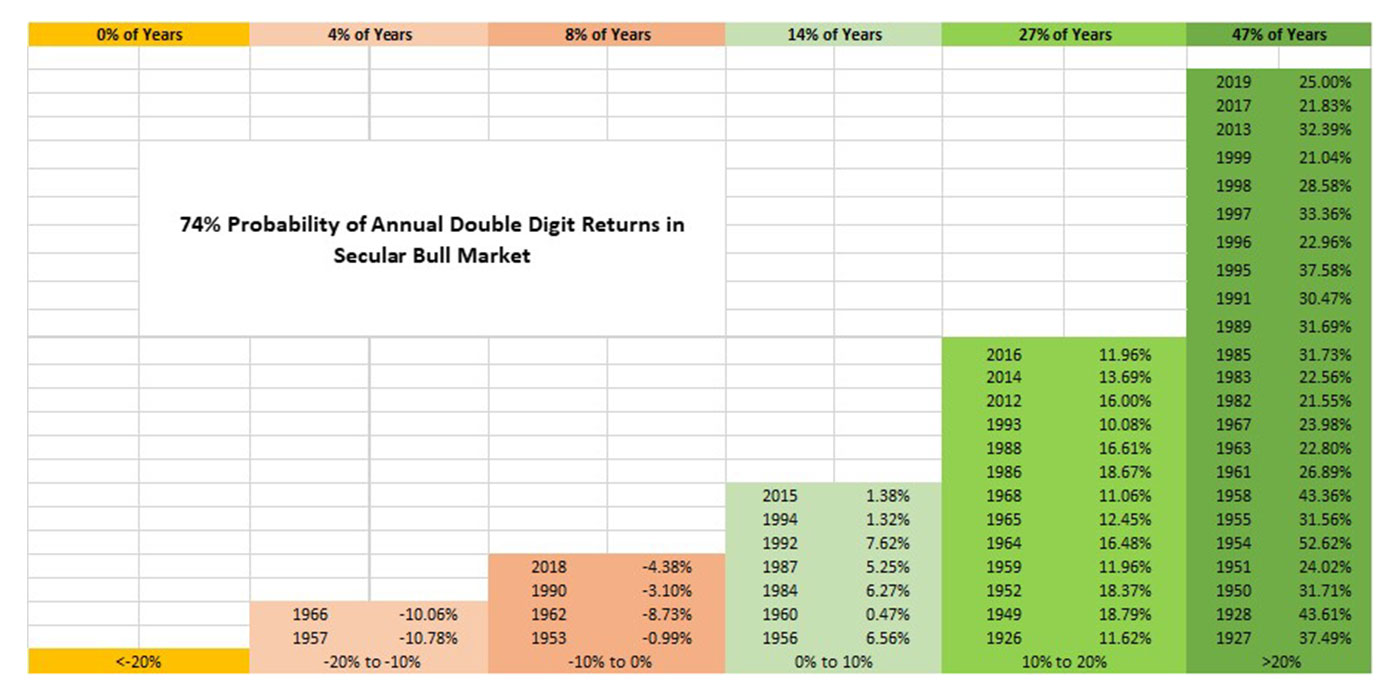 5. Double-digit market gains may also be found in small caps. The Russell 2000 index finally made a new 52-week high at the end of November. According to research by Ryan Detrick, LPL Financial’s senior market strategist, future returns for the Russell 2000 have tended to be positive when the small-cap index has gone more than a year without setting a 52-week high. In the prior 12 cases since 1985, the average return has been 17%.

6. Rate cuts by the Federal Reserve have been very bullish for equity markets, especially when followed by a pause. The first cut came in late July, followed by a second in mid-September, and a third cut in late October, along with a Fed announcement that it is pausing (i.e., that there is no need for more stimulus). Short easing cycles without recessions have been especially bullish over the following year, and few expect a recession in the coming year.

Looking at cases of a third Fed rate cut, we could look back 100 years for the Dow Jones Industrial Average (DJIA) and include the secular bull market of the 1920s. Using the DJIA, there were eight such cases, with an average gain of 29.4% a year later. That would make for an 8,000-point gain in the Dow, with a move above 35,000 by late October 2020.

Even given all of these data points, 2020 will be a challenging year, and gains will not be as easy as those in 2019.

The major challenges include a presidential election and the outcome of China–U.S. trade talks. If both were to be resolved positively in investors’ minds, the S&P 500 would probably close out the year at the top end of the quantitative estimates above 3,700—for a gain of more than 20%. If investors see either event being resolved negatively, the market’s gains will probably be more restrained and likely in the low teens, or around 3,400 for the S&P 500.

Editor’s note: This analysis is based in some instances on a year-end 2019 close for the S&P 500 of around 3,100. Estimates would have to be adjusted if the close is significantly higher or lower.