What a rising interest-rate environment means for small-cap stocks

Over the last seven years, the market has had a steady diet of ultra-low interest rates and, while the general expectation is that the Fed will raise rates in the coming months, the size and spacing of such increases are the subject of much speculation.

This period of anticipation raises questions concerning how a rate hike will affect the small-cap class of assets, particularly given its historically strong long-term performance versus its more recent weak performance. Specifically, over the past three years, the Russell 2000 (a broad small-cap company index), has returned 10.5% on a total return basis. Compare this to the S&P 500’s return of 24.2% and the Russell 1000’s (a large-cap index) return of 23.2% and it’s clear that the market has favored larger names over smaller ones in recent years.

In the past six months, however, there has been an uptick in small-cap performance that shines a spotlight on the potential impact of a rate hike. A U.S. News and World Report article from June states, “Small-capitalization stocks have been on a tear since February. After a long period of lagging performance, small-cap stocks stole center stage in the recent recovery in U.S. equities.”

The article quotes Terry Sandven, chief equity strategist at U.S. Bank Wealth Management, who believes the “resurgence of small-cap performance from the February low is typically a positive omen for economic growth. Small caps ted to outperform when the economy is expanding and the risk of a looming recession is low.”

What if rates go up?

Conventional wisdom says that rising interest rates can have a negative impact on equity investors in general and small-cap stocks (market capitalization between $250 million and $2 billion) in particular due to the following:

The reality, however, is that small-cap stocks have historically tended to perform better than large-cap stocks during periods of rising interest rates. 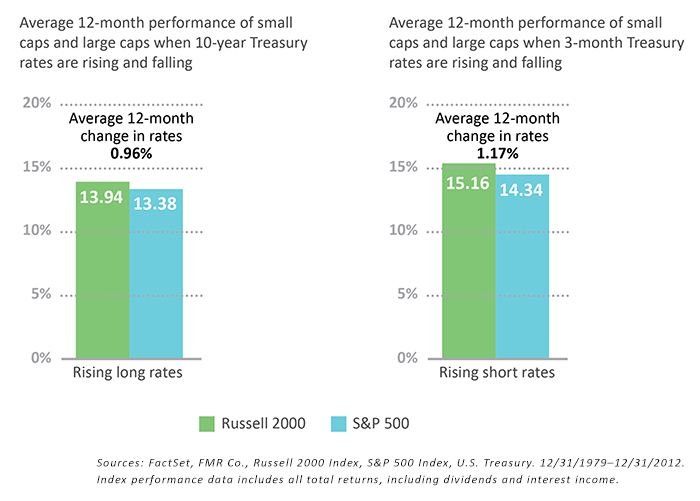 There are a few theories to explain this:

Contrarian investors with long-term time horizons—who value the market’s historical statistics and believe in mean reversion—should consider tilting their portfolios a bit more toward small caps to benefit from the probable improved relative performance over the next three to five years.

John P. Reese is co-founder of Validea Capital Management. He is the manager of Validea Capital’s active equity ETF and separate accounts. Mr. Reese is the author of “The Guru Investor: How to Beat the Market Using History’s Best Investment Strategies.” He is a graduate of MIT and Harvard Business School and holds two patents in the area of automated stock investing. Follow John’s thoughts and ideas at www.validea.com/blog or on Twitter at @guruinvestor.