The seasonal tendencies of the “Halloween Effect” may help spooked investors forget a ghoulish start to Q4 2014.

So far, 2014 has not played out according to the forecasted script, with multiple surprises on the bond yield front, unforeseen geopolitical risk events, jarring weakness in the energy sector, the smashing of complacency in the markets, and the emergence of the Ebola virus as a global concern—to mention just a few of the unexpected occurrences.

But within this context, how have some of Wall Street’s time-honored “truisms” held up in 2014? The picture is very mixed, with some hits, some misses, and the jury still out on several others. With Halloween upon us—historically a potential turning point for volatile markets—let’s take a look at the year-to-date performance of some pieces of the Street’s conventional wisdom.

Halloween is historically a potential turning point for volatile markets.

The “January Indicator” or “January Barometer” says, in effect, “As January goes, so goes the market for the year.” With the S&P 500 off nearly 4% in January 2014, this indicator was decidedly negative for the full year. But does the saying really merit any consideration? Statistics can be massaged to prove just about any point, including cases for or against the “January Indicator.” One finding that resonates the most consistently is just slightly negative, found in research by S&P Capital IQ that states, “While a down January does not necessarily predict a negative year, it has relatively strong accuracy in suggesting a less-than-stellar market year.”

Less well-known is the “Easter Indicator.” This adage more or less gives a second chance to markets if there was indeed a down January. Analysis by Schaeffer’s Investment Research and Forbes shows that for the past 30 years, when the S&P 500 is down at Easter, the Index averages a loss of 2% for the rest of the year and is positive just half of the time. Years when the Index was positive through Easter average a return of nearly 10% for the rest of the year and have been positive an impressive 90% of the time. The somewhat good news here is that the S&P 500 rallied hard in the shortened trading week before Easter this year, turning what was looking like a negative performance for the year at that time into one ever-so-slightly positive, +0.8% for the SPX (but that can hardly be considered a definitive leaning one way or the other).

“Sell in May and go away” may be the best known of all Street sayings. This cliché has its roots in British market tradition, where savvy “City” investors were advised to sell before the summer months and return after “St. Leger Day.” The traditional market theory, according to the UK’s Telegraph, “was that with so many sports-related social events in the summer months—Royal Ascot, Wimbledon, Henley Royal Regatta, Cowes Week, and ending with the St. Leger Stakes horse race (on September 13th this year)—that trading volumes plummet and stock market fortunes wane.”

But what about the real performance of this period here in the U.S. for 2014? Whether one sold in the beginning, middle, or end of May—and then bought back into the S&P 500 on September 15—it was a losing proposition (giving up roughly 5% of Index gains). This was far from an unusual occurrence—Barron’s has pointed out that stocks have been up two-thirds of the time from May-October since 1950, though average returns are worse than any other six-month period.

The trends favor a rebound of the markets in the remainder of the fourth quarter following Halloween and in the first third of 2015.

This does, however, segue nicely into a brief discussion of three additional Street seasonal indicators. The first pertains to midterm elections and the second years of presidential terms. Though without a catchy name, the election cycle has had a powerful effect over the years (though causality is not well-explained), especially in predicting increased volatility preceding a midterm election. And the second years of presidential terms have represented some of the weakest market years of the election cycle, though usually showing poor performance beginning in the second and third quarters, followed by much stronger fourth quarters. While this indicator may not have worked perfectly in 2014, many cyclical market models did call for market weakness for much of October, and that certainly arrived right on cue.

The historical market weakness of September, leading to the possibility of heightened October volatility, is well-known and represents at least one seasonal indicator that played out to near perfection this year. Doug Short noted recently in Advisor Perspectives that October has by far hosted the most significant market bottoms of any month since 1950, with five of the top ten such negative events. As indicated in the following figure, he also comments on October’s historical high volatility ranking, saying, “A survey of all the months with 10% or more intra-month volatility puts October at the top, as does a ranking by the average intra-month volatility.” 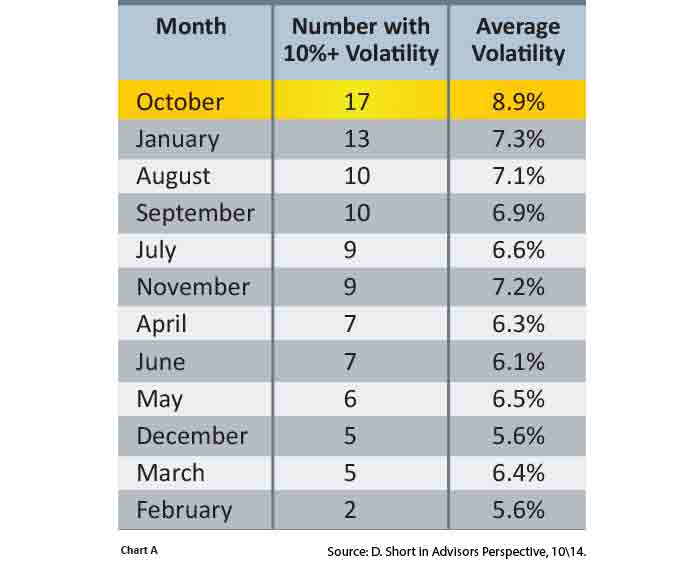 Short’s ending analysis—“So, if you don’t like volatility, you’ve traditionally been happier when Halloween is a memory”—brings us to the final Street seasonality adage. This is thankfully a far more positive look at historical market data, known as the “Halloween Effect.” Simply stated, the trends favor a rebound of the markets in the remainder of the fourth quarter following Halloween and in the first third of 2015 (including perhaps the frequent “Santa Claus” rally of the year’s last five trading days and the New Year’s first two).

The Stock Trader’s Almanac states that since 1950 the Dow Jones Industrial Average (DJIA) has had an average return of only 0.3% during the May-October period, compared with an average gain of 7.5% during the November-April period. Yardeni Research has charted average monthly returns of the S&P 500 from 1928-2014 (see the following figure), indicating the consistency of three of the four strongest market months falling in the November-April period (July being a notable outlier).

The Wall Street Journal also acknowledges the “Halloween Indicator” and its “six-months-on, six-months-off” seasonal pattern (see the following figure) demonstrating “a tendency for the stock market to deliver the bulk of its gains between October 31 and the subsequent May 1 (6.6% gain vs. 0.8% over the past 50 years).”

The Bull in Winter 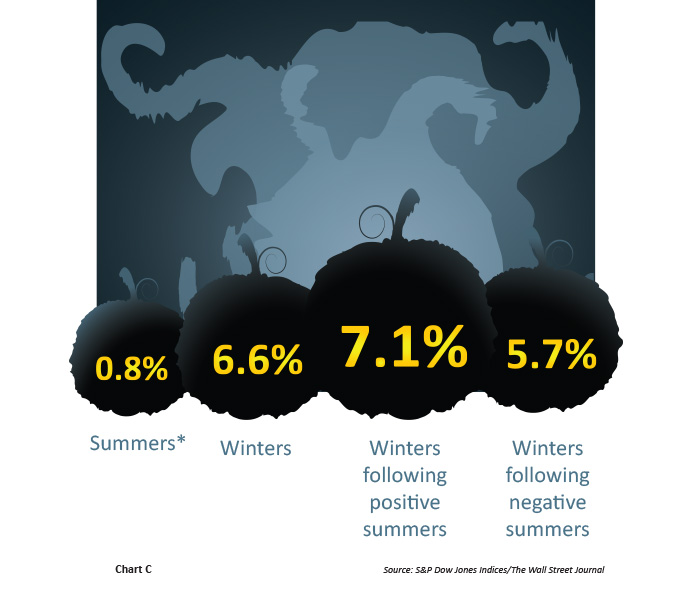 *”Summers’”refer to the periods between May Day and Halloween;”winters” are the other six months of the year

While seasonal market indicators and patterns are hardly guarantees of future market performance, their general grounding in historical data over long time periods does provide food for thought for the serious market participant. In fact, more than one tactical active investment strategy factors in quantitative consideration of the metrics of seasonal cycles and patterns.

At the very least, for investors feeling like parts of this October were far too tricky, there is perhaps some evidence-based hope that the passing of Halloween will turn out to be a treat in and of itself.