Market performance after significant down years

In its recent article “Back-to-Back Down Years Are Rare for the Stock Market,” Statista, a leading provider of market and consumer data analysis, shows that the odds favor positive returns for U.S. equity markets in 2023:

“While positive returns in 2020 and 2021, despite Covid-19, made it seem like the only way for the stock market was up, 2022 served as a good reminder that that is not the case. In fact, investors are now worried that lightning might strike a second time in 2023, as most of the crises that led to the market decline last year remain unsolved with the specter of a global recession looming large over markets around the world.

“And while history might point to an upbeat 2023—on average the S&P 500 gained 15 percent in years following a negative year—the odds are stacked against investors this time. As the war in Ukraine drags on, Covid-19 continues to disrupt the Chinese economy, and the Fed is all but certain to keep raising interest rates in the face of red-hot inflation, consumer spending and corporate earnings may well buckle, which could send stock prices even further down.”

FIGURE 1: BACK-TO-BACK DOWN YEARS ARE RARE FOR THE
STOCK MARKET 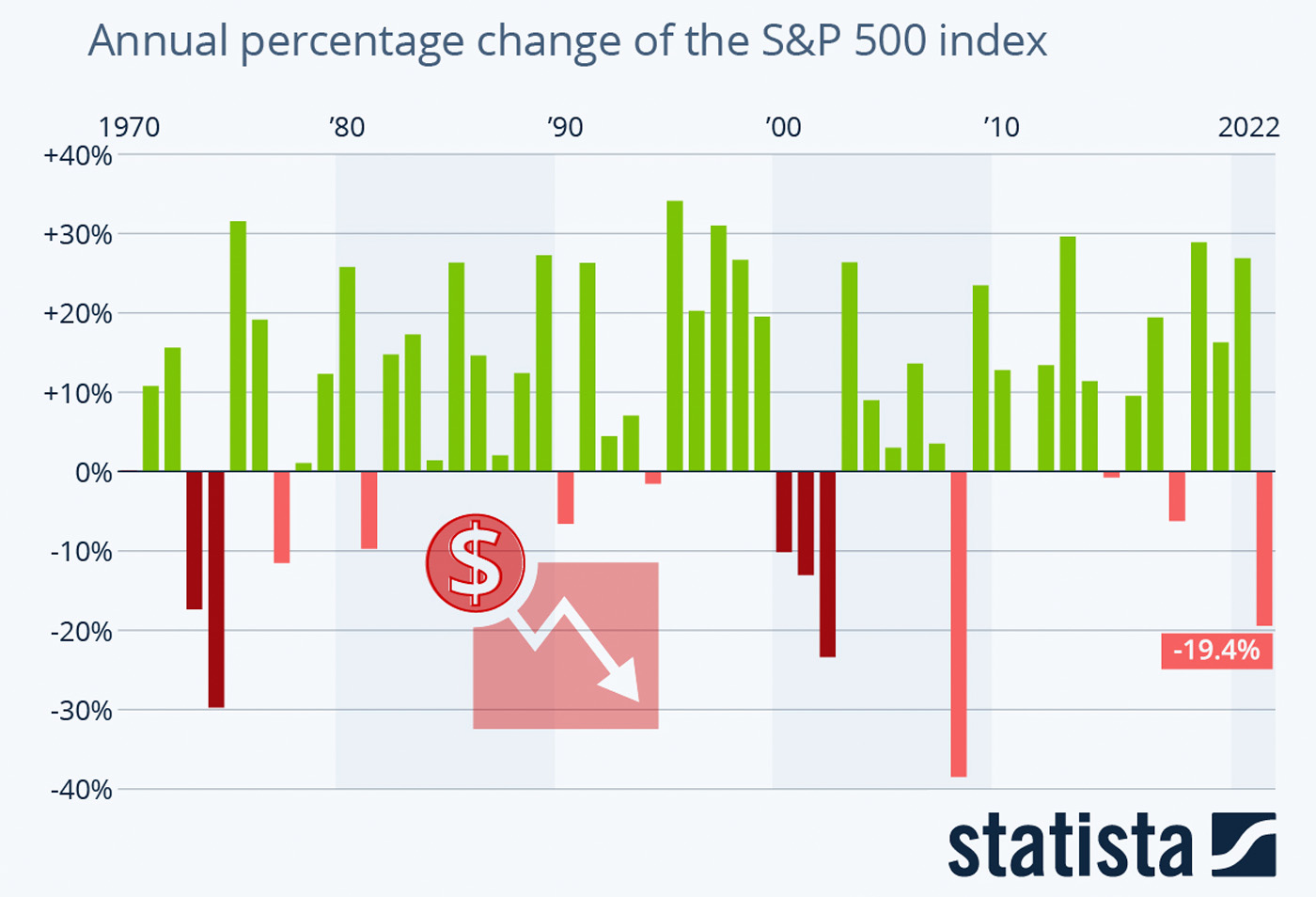 Bolstering the argument that 2023 may see positive market returns, according to MarketWatch, Bank of America’s (BofA’s) global research group believes that recommended allocations to stocks at the end of 2022 “dropped to levels that historically have sent a contrarian, bullish signal to the U.S. stock market.”

“Bank of America’s sell-side indicator, which tracks the average recommended allocation to stocks by U.S. sell-side strategists, declined to 53% in December as the S&P 500 suffered a monthly drop of around 6%. … When the indicator was at current levels or lower historically, the S&P 500’s returns over the subsequent 12 months were positive 95% of the time while the median 12-month return was 21%, the note shows. …

“‘Wall Street’s consensus equity allocation has been a reliable contrarian indicator over time,’ the strategists said. ‘In other words, it has been a bullish signal when Wall Street strategists were extremely bearish, and vice versa.’”

However, the opinions of Wall Street analysts vary widely, with a common theme being single-digit returns for the S&P 500 and most other asset classes (whether positive or negative).

A recent client note from Goldman Sachs was decidedly on the cautious side for equities, says Financial Advisor Magazine:

“There is no reason investors should take on risk in 2023, Alexandra Wilson-Elizondo, head of multi-asset retail investing at Goldman Sachs, told investors in a note this morning, responding to data showing the jobs market is still growing despite the Federal Reserve’s attempts to hit the brakes through seven interest rate hikes last year. …

“Wilson-Elizondo said the jobs report ‘will most likely add to the growing narrative of a disinflationary environment crossing with a robust economy and therefore a soft landing,’ which could prove positive for stocks in the short-term.

“‘However, our positioning remains risk-off into 2023. It’s hard to see how risky assets can compete with approximately 5% yields in money market funds until more clarity is delivered on the inflation/growth mix,’ Wilson-Elizondo said.”

However, Barron’s annual outlook for 2023 had a fairly bullish consensus from the strategists it interviewed:

“Once the Fed pauses its tightening, the gloom shrouding Wall Street could lift, setting the stage for a stock market rally. Based on the average of the predictions of eight investment strategists recently canvassed by Barron’s, the S&P 500 could end 2023 at 4233, 9% above its current level. …

“Fixed income is no longer an oxymoron, and bonds will play more than a diversification role in portfolios in 2023. That, too, is a welcome change, especially as stocks are likely to head lower for a while. Like 2022, 2023 won’t be boring for investors. And it might be a much better year, especially once investors begin to contemplate a stronger economy in 2024.”