This was an unprecedented election season on many fronts: the stark contrasts between the candidates, the high level of inflammatory rhetoric, and numerous pre-election “surprises.” But putting 2016 aside for now, can we learn anything from other contentious and extremely close presidential election seasons in terms of their market impact? 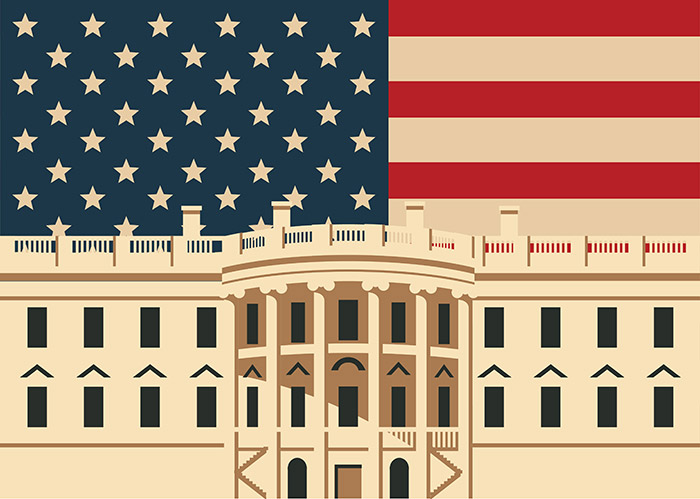 The goal of this report is to analyze the market impact of U.S. presidential elections and discover if elections spark new longer-term uptrends or downtrends. Our method of analysis may be considered nontraditional by some, as it places minimal importance on the presidential candidates’ personalities and political platforms. Instead, we focus on the market forces of supply and demand. At Lowry Research, we believe the law of supply and demand is the foundation of all economic analysis and is the most powerful method to analyze the stock market. In accordance with this belief, we created the Buying Power and Selling Pressure Indexes in 1938 to measure trends in supply and demand. We still use these Indexes today.

Nearly 70 years ago, people still recall the picture of a smiling Harry Truman holding up the Chicago Daily Tribune, which said on the front page “Dewey Defeats Truman.” Of course, Truman was grinning because he, in contrast to what the Tribune said, had won. Before the election, he had faced years of opposition from his own party, and polls were showing he would be a clear loser in the election. How did this surprise outcome impact the stock market? 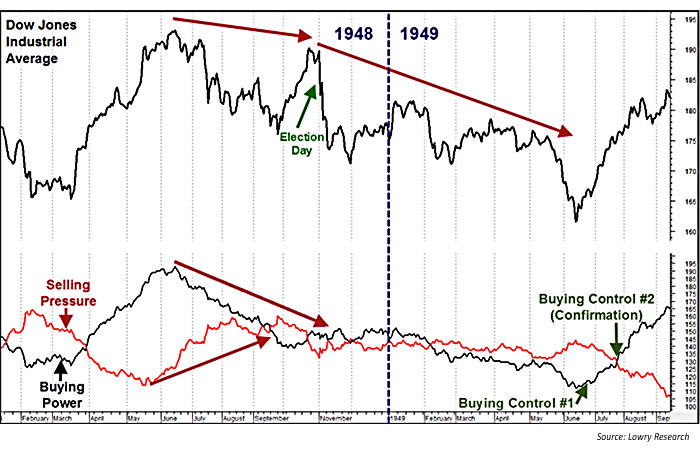 The Dow Jones Industrial Average (DJIA) made its final bull market peak in June 1948, and in November, just before the election, tested its June high. To an investor looking only at the DJIA, this test may have looked like the beginning of a new leg higher in the bull market. The deteriorating balance between supply and demand said otherwise, however, as Buying Power was in the midst of a steep downtrend, which was met with a steep uptrend in Selling Pressure. These trends indicated a bear market that was not going to end soon, regardless of the election results. As such, following the election, prices continued lower until June 1949, right before we observed a substantial improvement between supply and demand. These improvements caused a Buying Control #1 signal to be registered on June 21, 1949, and a Buying Control #2 signal on July 26 to confirm the first buy signal. What followed was one of the longest bull markets in modern history.

The electorate was evenly split in their support of John Kennedy and Richard Nixon, with John Kennedy winning the popular vote by just under 120,000 votes. This was the narrowest margin of victory, as measured by the popular vote, in history. The key issues focused on the economy, which was in a recession, and the Cold War, which was becoming more of a geopolitical point of contention by the day. 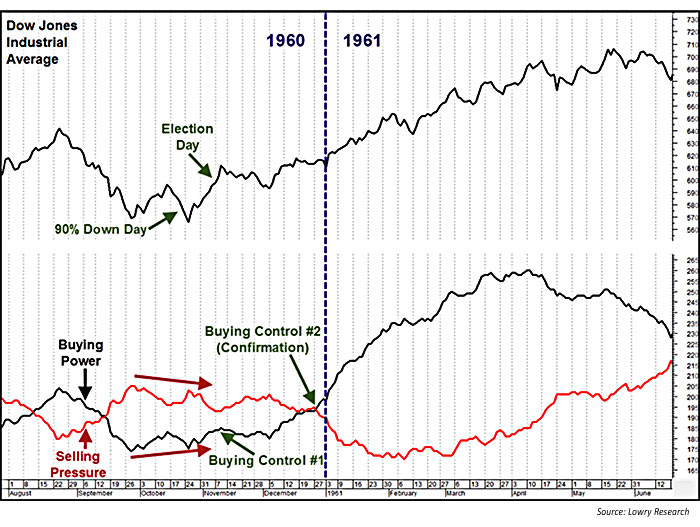 Following the election, the market steadily trended higher for the next year. The uptrend wasn’t the result of the election, though. It was simply a continuation of the uptrend already established in October 1960. The prevailing trends between supply and demand had been improving since September, two months earlier. Since then, and through the election, the negative spread between Buying Power and Selling Pressure was contracting. Additionally, in late October, a 90% Downside Day (registered when both points lost and down volume are both 90% of their respective totals on a given day) occurred just as the market was testing its September low. As noted another article this year from Lowry Research, “Keys to identifying major/minor equity market bottoms,” the registration of a 90% Downside Day after a prolonged decline can often result in an exhaustion of supply and, once signs of powerful demand appear, a sustainable longer-term advance.

Nevertheless, by November 10, 1960, the trends between supply and demand had improved enough to register a Buying Control #1 signal. Confirming this initial intermediate-term buy signal, on December 28, Buying Power had crossed above Selling Pressure, registering a Buying Control #2 signal. Following the second buy signal, the DJIA climbed over 19% during the next 12 months.

Less than a year after John Kennedy’s assassination, newly inaugurated Lyndon Johnson was already up for election. Johnson may not have been as concerned about opposition from the Republican candidate, Barry Goldwater, as turmoil from within his own party. Before Johnson was able to run for president, he had to defeat his opponent in the primary election, George Wallace, who was adamantly against the civil rights movement. After Johnson defeated Wallace, one of the Democratic Party’s major concerns was losing the pro-segregation states in the south to Goldwater, which could potentially give Goldwater the election. As such, a potentially close election was expected. 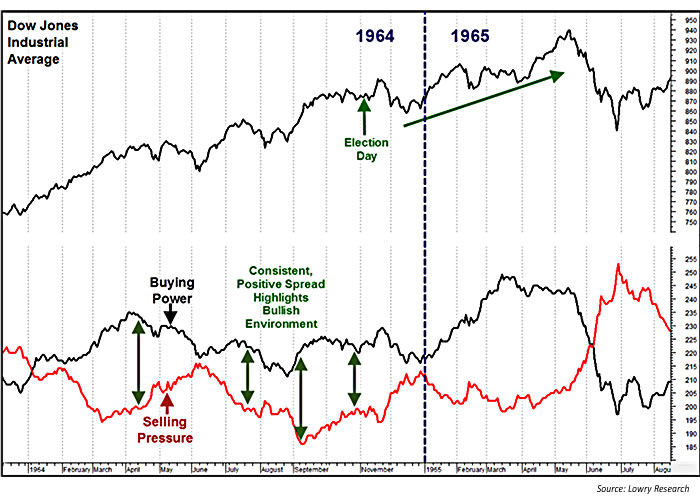 Despite the concerns, the final outcome showed Johnson handily defeating Goldwater. Following the results, there was only minimal market volatility and scant indication that a new major uptrend or downtrend was starting. Thus, those looking to “trade the election” were likely disappointed. However, investors who were monitoring the forces of supply and demand could see that, with Buying Power consistently in the dominant position above Selling Pressure during 1964, a longer-term bull market was in play—and moreover, that this bull market most likely had longer to run. Over the next six months, the DJIA climbed over 7%.

Chatter about the 2000 election still crops up every now and then here at Lowry Research’s headquarters in Palm Beach County, Florida. Florida proved to be the state that put George W. Bush into office. The margin of victory in the state was so slim, in fact, there had to be a recount. After the recount indicated Bush won by just a hair, the Florida Supreme Court ruled 70,000 previously rejected ballots needed to be counted. The final result was unknown until December 12, when the U.S. Supreme Court ordered the initially certified voting results to hold, making Bush the winner. With the final outcome of the election delayed for over a month past Election Day, holding investors in suspense, would a new, longer-term bull or bear market trend emerge? 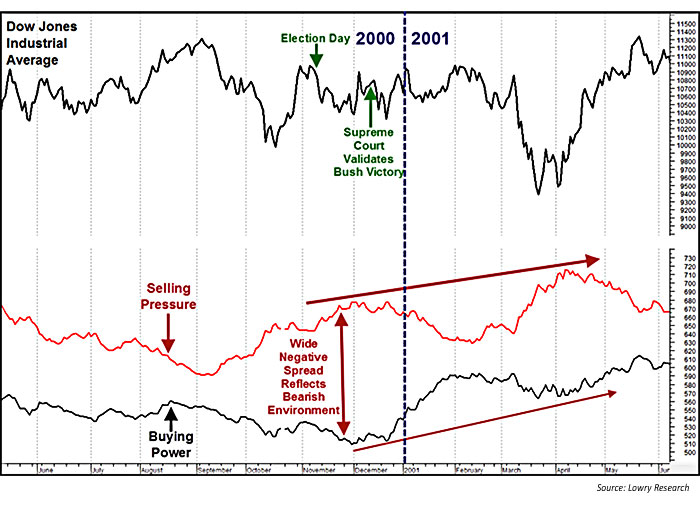 Again, despite the tensions surrounding this election, most of the volatility following both Election Day and the Supreme Court ruling was short-term in nature. Before the election, the prevailing uptrends in Buying Power and Selling Pressure were reflecting a bifurcated market—a bull market in “dot-com” stocks and a handful of mega caps, and a bear market in the rest of the market. Even so, Selling Pressure remained in the dominant position above Buying Power, reflecting an environment in which buyers would have a difficult time pushing prices to new highs. And, as we now know, the challenge proved too much for buyers, as sellers eventually dragged the DJIA, S&P 500, and NASDAQ Composite into a fierce, three-year bear market.

Drawing conclusions from our previous examples, what we find is that the results of elections may cause some short-term market volatility, but prove of little significance in determining the future, longer-term trend of the market. What commands the longer-term trend of the market, regardless of the outcome of an election, are the prevailing trends between market supply and demand before the election. As such, the result of the presidential race between Hillary Clinton and Donald Trump may cause some short-term volatility, but the prevailing forces of supply and demand will eventually reassert the longer-term market trend. So, already understanding there may be some short-term volatility in the period after Election Day, what should investors expect the trend to be going forward? 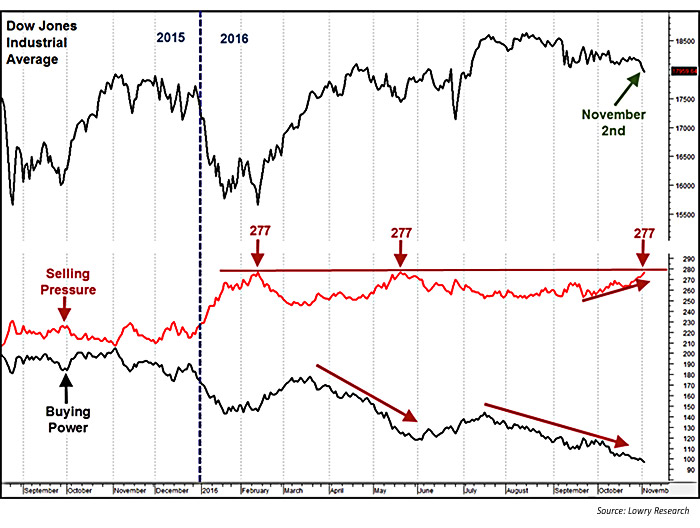 The main themes for 2016 have been contracting investor demand and relatively stagnant investor supply. The wide, negative spread between Buying Power and Selling Pressure highlights the market’s potential vulnerability over the longer term, but those vulnerabilities likely won’t be realized unless supply begins to rapidly expand. Our Selling Pressure Index touched its 2016 high at 277 in February, May, and November, but the Index never fully re-established its uptrend, which started in April 2015.

Selling Pressure has been trending higher over the past six weeks and may attempt to break above the key 277 level. A sustained cross above this level would likely forewarn of some potentially longer-term weakness. If Selling Pressure reverses down sharply, though, it would indicate an improving longer-term balance of supply and demand. As such, it will be imperative in the coming days to monitor Selling Pressure; once any short-term volatility subsides, Selling Pressure will likely give us clarity about the eventual direction of the longer-term market trend.

Christopher Diodato, CMT, is a market analyst with Lowry Research, where he uses Lowry’s proprietary research methods and presents actionable findings to clients. Before joining Lowry Research, Mr. Diodato was a financial advisor with Morgan Stanley and a member of the portfolio management team at Cetera Retirement Services. In addition to holding the Chartered Market Technician (CMT) designation, he is a Level III candidate for the Chartered Financial Analyst (CFA) program. https://www.lowryresearch.com

Lowry Research Corporation was founded in 1938 to provide analysts and investment professionals with an unbiased, factual analysis of the stock market. Its work is based on daily price change/volume statistics of all stocks traded on the New York Stock Exchange and NASDAQ Stock Market. This provides the statistical foundation for a supply-versus-demand analysis of market trends. For more information on Lowry Research, please visit lowryresearch.com.