Are we back to the ‘old’ new normal?

While the phrase “new normal” has been around for some time, the now-retired Bill Gross, then still heading PIMCO, is generally credited for popularizing it in the context of the 2007–2009 financial crisis and the outlook for global financial markets.

“Gross effectively discredited the idea that this brutal bear market will give way to a new decade of prosperity for risky assets, a notion that some notable speakers this year have cautiously entertained. Instead, Gross foresees a new investing landscape in which we will have to get used to a permanently downgraded economy and much lower returns on all manner of risk-taking.

“Now, as we go on a long, hard journey to repair our collective balance sheets, Gross sees no quick return to the days of low unemployment, low inflation, and solid economic growth. Gross suggested that investors would need to question many long-held beliefs as they adjust to this new normal. Among them is the idea that risky assets such as stocks are always better for the long run.”

Fast forward to the present day and it is clear that some of Mr. Gross’s predictions were not entirely correct, at least for the U.S. equity markets and some aspects of the economy.

The U.S. has achieved low unemployment levels, the best since the 1960s according to many analysts. Inflation has been tame, and U.S. equity markets have achieved a 10-year annualized total return of 17.4% for the S&P 500. That index has more than quadrupled since the lows of March 2009.

Where Mr. Gross was more on the mark was overall post-recession economic growth. The recovery from the 2007–2009 Great Recession, according to data from the Federal Reserve Bank of Minneapolis and compiled by CBS News, shows that this recession recovery was the second worst since World War II. Says CBS News, “Economists have bemoaned the unusually tepid recovery that followed the 2007 crash.” 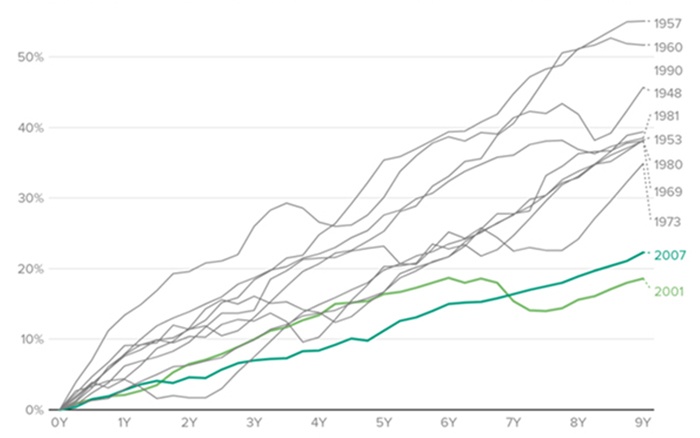 Source: CBS News, based on data from the Federal Reserve Bank of Minneapolis

In 2017 and early 2018, the new term floating around the financial press and from various market analysts was “synchronized global growth.” A Forbes article from November 2017 said,

“Nearly 10 years after the financial crisis brought the global economy to its knees, conditions have finally improved enough to crystallize my conviction that synchronized global growth is currently underway. …

“The Organization for Economic Cooperation and Development (OECD) backs up this claim in its quarterly economic outlook. According to the Paris-based group, synchronized global growth is finally within sight, with no major economy in contraction mode for the first time since 2008. World GDP is expected to advance 3.5 percent in 2017—its best year since 2011—and 3.7 percent in 2018.”

At that point and into 2018, some financial observers were starting to remark, “Perhaps we are seeing the start of a ‘new, new normal.’”

See Related Article: Will the dip in consumer sentiment be short-lived?

The most concerning of these three data points comes from the report of the OECD, which, according to Bloomberg, cut euro area growth estimates for 2019 from 1.8% to 1.0% and world economic growth from 3.5% from 3.3%.

“Real GDP is projected to grow by 2.3 percent in 2019—down from 3.1 percent in 2018—as the effects of the 2017 tax act on the growth of business investment wane and federal purchases, as projected under current law, decline sharply in the fourth quarter of 2019.” 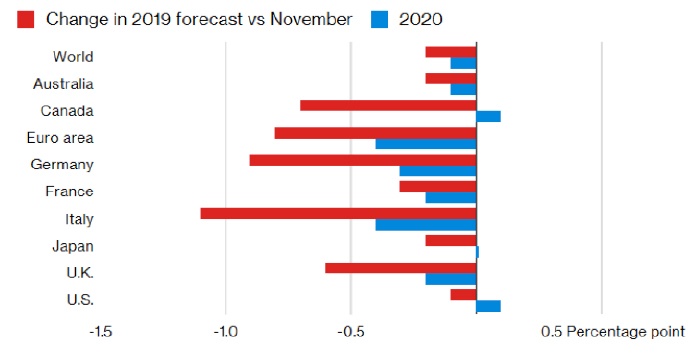 Source: Bloomberg, based on OECD data

Bespoke Investment Group has noted that Germany is a bellwether economy for global growth and that its recent manufacturing data “does not bode well for global output growth.”

The real issue for investors is what does this all mean for the global investment outlook for 2019?

While the month of March has been negative for the U.S. and most global markets as of March 8, major U.S. indexes are still up around 10% for the year. International markets range from China’s gain of over 20% for 2019 to Germany’s 6% increase, though a few markets are showing gains less than that.

The resolution of various new trade agreements, most notably between the U.S. and China, and clarity on the U.K.’s final Brexit plan should provide an impetus for further short-term market gains. What is far less certain is how markets will stand up to a true global economic slowdown.

The opinions expressed in this article are those of the author and do not necessarily represent the views of Proactive Advisor Magazine. These opinions are presented for educational purposes only.
Recent Posts: