The overall picture was quite positive, with 70% of the releases (26 of 37) either at or above estimates, or, where estimates were not available, coming in equal to or higher than the previous period’s release.

The most notable of these was the Dallas Fed’s manufacturing activity index, which came in at 17.2, versus a consensus estimate of 5.0.

This trend continued into last week, with two reports released on Mar. 1 that well exceeded expectations. The Institute for Supply Management (ISM) reported its manufacturing index moved to its highest level since January 2018, and the growth in construction spending for January was double the expected percentage increase.

The ISM noted that “economic activity in the manufacturing sector grew in February, with the overall economy notching a ninth consecutive month of growth.”

Source: Trading Economics, based on data from Institute for Supply Management

According to Bespoke, this index “measures the pace at which economic indicators are coming in ahead of (or below) consensus economist estimates over a 50-day period.”

“While our diffusion index dipped into negative territory immediately following the signing of prior COVID relief bills, once the funds flooded into the system, the pace of better than expected reports took off. … Not only is economic data generally improved year-over-year, but more importantly, the vast majority of reports have been topping expectations. Through Monday [Mar. 1], the reading on our Diffusion Index was at +20 after briefly dipping into negative territory in January. The recent rebound in the Diffusion Index follows what was a record surge in the Summer where it topped out at +42.”
FIGURE 2: BESPOKE ECONOMIC INDICATOR DIFFUSION INDEX (LAST 12 MONTHS)

The growing optimism about economic data, significant news on the vaccine front, and the prospects for the passage of the next COVID relief bill have all contributed to rising estimates for GDP growth for Q1 2021 (and in many cases for the entire year).

The New York Times provided excerpts from a recent speech by John Williams, the president of the Federal Reserve Bank of New York. He remarked, in part,

“Fiscal support, combined with highly favorable financial conditions and steady progress on vaccinations, are all reasons to be optimistic the economy will experience a strong recovery this year. … With our economy and the global economy still far below full strength, I expect underlying inflationary pressures to remain subdued for some time.”

Although there is a wide range of forecasts, Kiplinger’s recent economic forecast notes that GDP estimates generally keep rising and that “GDP will likely grow by 6.2% or more this year.”

According to the article, one large contributing factor will be pent-up consumer demand:

“As the pandemic recedes, consumers’ savings could be used to splurge on services that they have been skipping, setting up a possible boom in the service sector, beginning mid-year. The consumer savings rate was 13.7% in December, well above its normal level of 7.5%. Consumers saved 16.3% of their disposable income in 2020, and thus will have plenty of cash to boost spending on travel, dining out and other services after the pandemic is brought under control.”

CNBC points to one of the highest estimates for Q1 2021 GDP growth from the Atlanta Fed, while also saying employment data could be a restraining factor on some of the more optimistic estimates for the entire year:

“The Atlanta Federal Reserve, which tracks data in real time to estimate changes in gross domestic product, now is indicating a 10% gain for the first three months of the year. The GDPNow tool generally is volatile early in the quarter then becomes more accurate as the data rolls in through the period.

“That comes on the heels of a report Friday showing that personal income surged 10% in January, thanks largely to $600 stimulus checks from the government. Household wealth increased nearly $2 trillion for the month while spending rose just 2.4%, or $340.9 billion. …

“To be sure, frailties remain in the economy. Paramount among them is the gap in employment, particularly in the services sector. As of January, there were 8.6 million fewer employed than there were a year ago, just before the pandemic began threatening the U.S., according to the Bureau of Labor Statistics. About 4.3 million Americans have left the labor force in that time.” 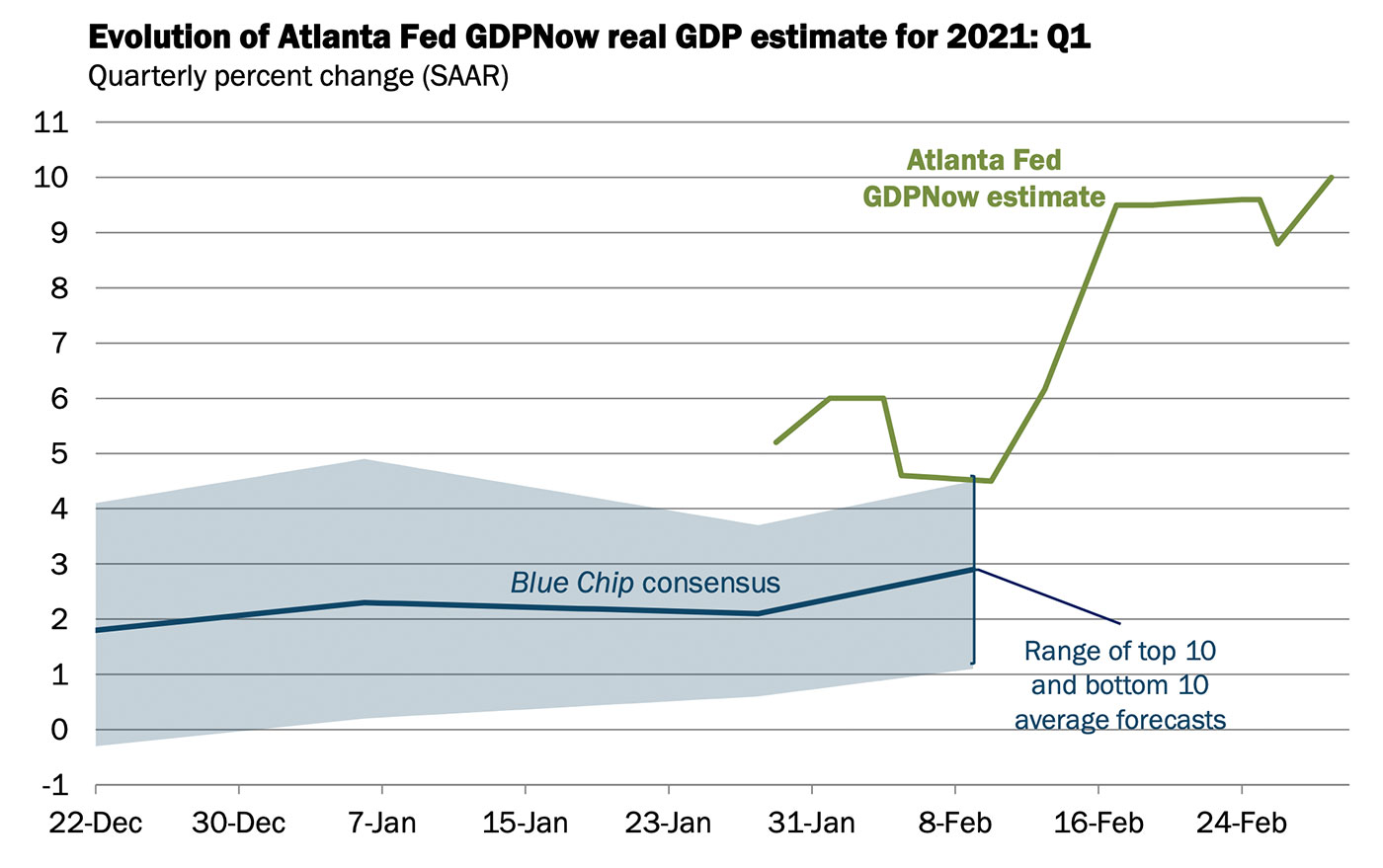