With the U.S. debt continuing to spike higher and set records, the U.S. dollar is declining, losing more than 10% of its value since March. The Federal Reserve has reduced interest rates effectively to zero (Fed funds current target rate of 0.00–0.25), which has caused our currency to depreciate and become less of a global highway for use in purchases and sales.

What does that mean for the U.S. consumer?

It means that imports will become more expensive. It will take more U.S. dollars to buy stuff in the global marketplace. On the other hand, it may add further impetus for the U.S. to return to more manufacturing on its shores rather than importing value-added or globally manufactured products. That may also cause the prices of things to increase. With a decreased presence of global marketers competing in the U.S., inflation is likely to tick up. On the positive side, we may be able to export more to the rest of the world because our export prices will take a haircut via the weakness in the U.S. dollar.

The one thing that the market isn’t really looking at, in my opinion, is the automation of many of the jobs in the United States. Partly because of the increased cost of U.S.-based labor (with labor costs historically representing about two-thirds of companies’ total cost of production), it is likely that new American factories will increasingly be populated by machines doing many of the jobs that labor used to do. The cost for setting this up could be high initially. In the end, however, it will cost companies less and increase their profits, holding down costs. There goes some of the inflation, out the door. The result may be not an increase in manufacturing employment but an automated system that performs many of the “blue-collar jobs” of the past.

So what happens to the blue-collar worker struggling to pay bills? How will the eventual economic recovery and expansion help this group?

Well, I don’t see inflation taking off as many are predicting—despite the Fed’s recent much-publicized policy statements. I see continued turbulence in the general population between those who have and are gaining more wealth and those who don’t have wealth to grow. Somehow, this will have to be equalized so that middle-class workers can survive. Perhaps if fiscal policy really encouraged broad-scale work on the crumbling U.S. infrastructure, some of the automation drain would be addressed. Construction workers are in a relatively better position than factory workers; it is harder to automate the human labor required in building buildings, bridges, roads, and so on. On the flip side, the global workforce outside the U.S. could suffer to some degree if U.S. companies increasingly relocate manufacturing to our country.

The Federal Reserve’s goal of keeping interest rates low for the foreseeable future is mainly benefiting homebuyers, corporations, and financial markets. Homeownership has moved higher since 2016, and the pandemic has only strengthened that trend. Unfortunately, it is likely that lower-income groups, as well as many in the middle class, will continue having a difficult time with household finances.

Looking at the monthly chart of the U.S. dollar, there is a line of support seen on the September dollar futures at 91.89, which is also near the long-term uptrend line dating back to 2011. Should that fail to support the market, there is a substantial support line at 88.15. Should that line fall, then you will see the dollar drop to 83.42. Below that, there is good support at 79.57. 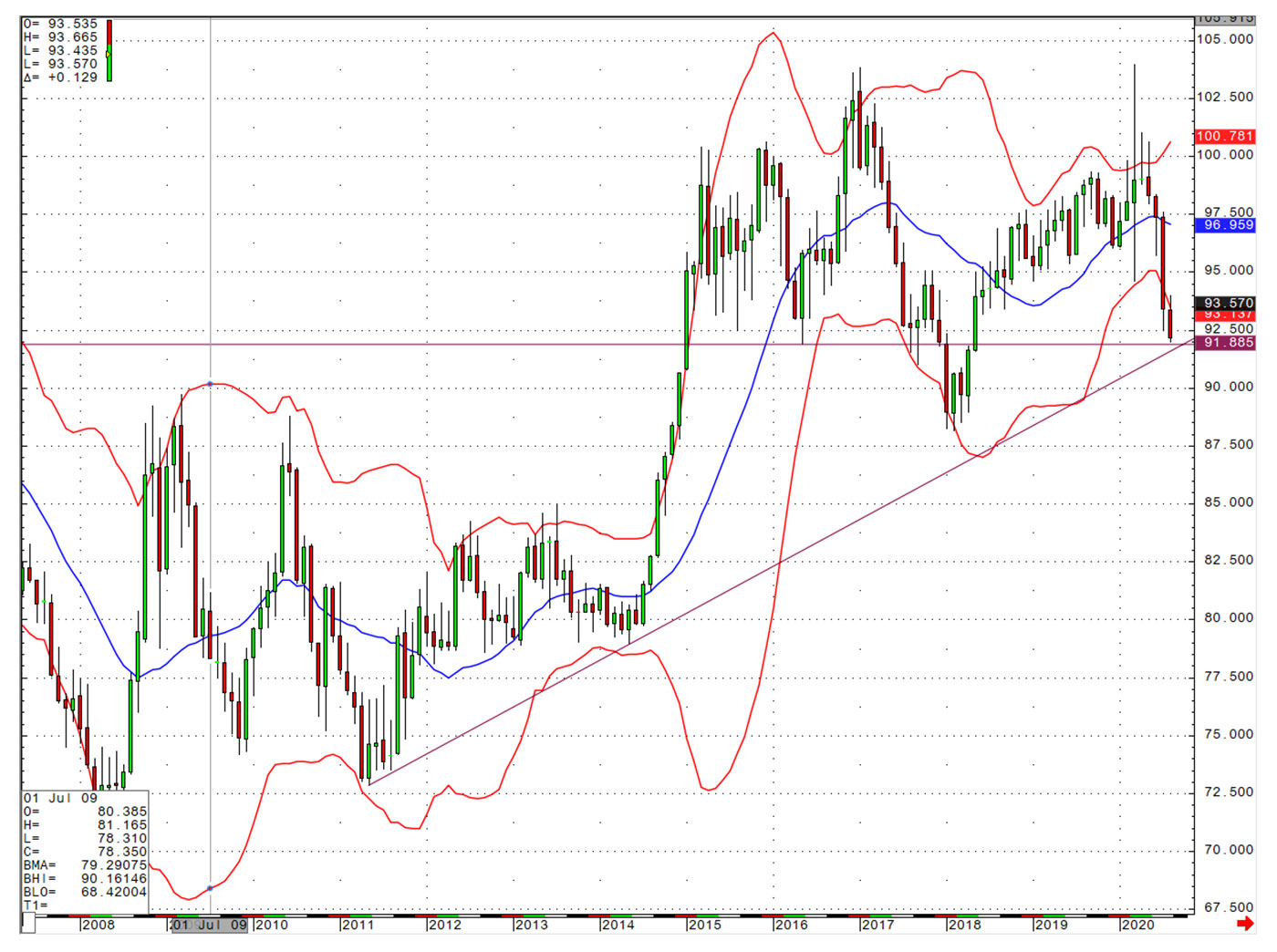 A weaker U.S. dollar supports the U.S. labor market to some degree in the sense that as our labor becomes relatively “cheaper,” it is somewhat easier to regain our manufacturing. Just think about it. If we import products or manufactured goods from abroad with a higher global currency versus the weakened U.S. dollar, the cost of things goes up.

Isn’t it more cost-effective in the long run and better for our economy to reestablish manufacturing here, even though we will have to pay our U.S. workers more, rather than paying overseas labor costs with a weak U.S. dollar? China is mostly responsible for our lack of inflation on imports. They are a low-cost provider that would rather lose money than lose the trade. Will they continue their unfair trade practices, or will the U.S. government increasingly tax their products to equalize the game? These are things to think about, along with the post-pandemic prospects of U.S. blue-collar workers.

Jeanette Schwarz Young, CFP, CMT, CFTe, is the author of the Option Queen Letter, a weekly newsletter issued and published every Sunday, and "The Options Doctor," published by John Wiley & Son in 2007. She was the first director of the CMT program for the CMT Association (formerly Market Technicians Association) and is currently a board member and the vice president of the Americas for the International Federation of Technical Analysts (IFTA). www.optnqueen.com