At Smooth Sailing Indexes, we work on alpha-generating ideas and create products that could have broad application and appeal. This takes observation, analysis, time, energy, and patience.

Occasionally, a repeating pattern gets noticed on the radar screen that can create value for investors with relatively little effort.

Personally, I like “low volatility” strategies, but usually it takes some “oomph” to deliver much higher returns than a target benchmark—before employing risk-taming measures to increase alpha.

Since the beginning of 2016, a binary trading relationship emerged between SPHB (Invesco S&P 500 High Beta ETF) and SPLV (Invesco S&P 500 Low Volatility ETF) that has delivered about 63% excess return above buying and holding the S&P 500, while having 32% greater standard deviation (measured weekly).

But those are raw returns. Simple risk-management techniques can be easily applied to substantially reduce volatility, while harnessing (or even enhancing) the return.

The two ETFs are quite different: SPHB seeks 100 companies within the S&P 500 that are behaving like hungry hyenas, while SPLV seeks 100 companies within the S&P 500 that have the temperament of a sloth. Combining the two into this “idea nugget” is quite simple to actively manage. If the trailing week return of SPHB is greater than SPLV, buy SPHB at the close of this week. If not, buy SPLV. Review the trailing week returns at the end of each week and make a change, if needed. That’s it.

I decided to research this phenomenon going back to the inception of SPHB and SPLV on May 6, 2011. There was no statistical advantage over simply buying and holding the S&P until about five years ago.

I decided to apply the same strategy using SPHB and SPY (for thrill junkies). Zing! $10,000 grew to $50,200—more volatile than SPY but still a noticeable return difference.

So, for active managers in this new age of low or no trading costs, this can be a choice in your toolbox. A bonus: The same strategy works at the end of each day for hyperactive managers. The SPHB/SPLV binary $10,000 grew to $44,900 with equal max drawdown. And it works if implemented at the end of each month for more strategic managers. $10,000 grew to $47,900—but with an outlier drawdown event in March 2020 due to exposure to SPHB during that month.

These types of results enhance the excess return part of the money-managing balance. An advisor or active manager can then employ the risk-management aspects of the strategy to smooth the journey and, in the end, create excess alpha.

RETURN CURVES FOR SPY HYBRID STRATEGIES VS. BUY AND HOLD 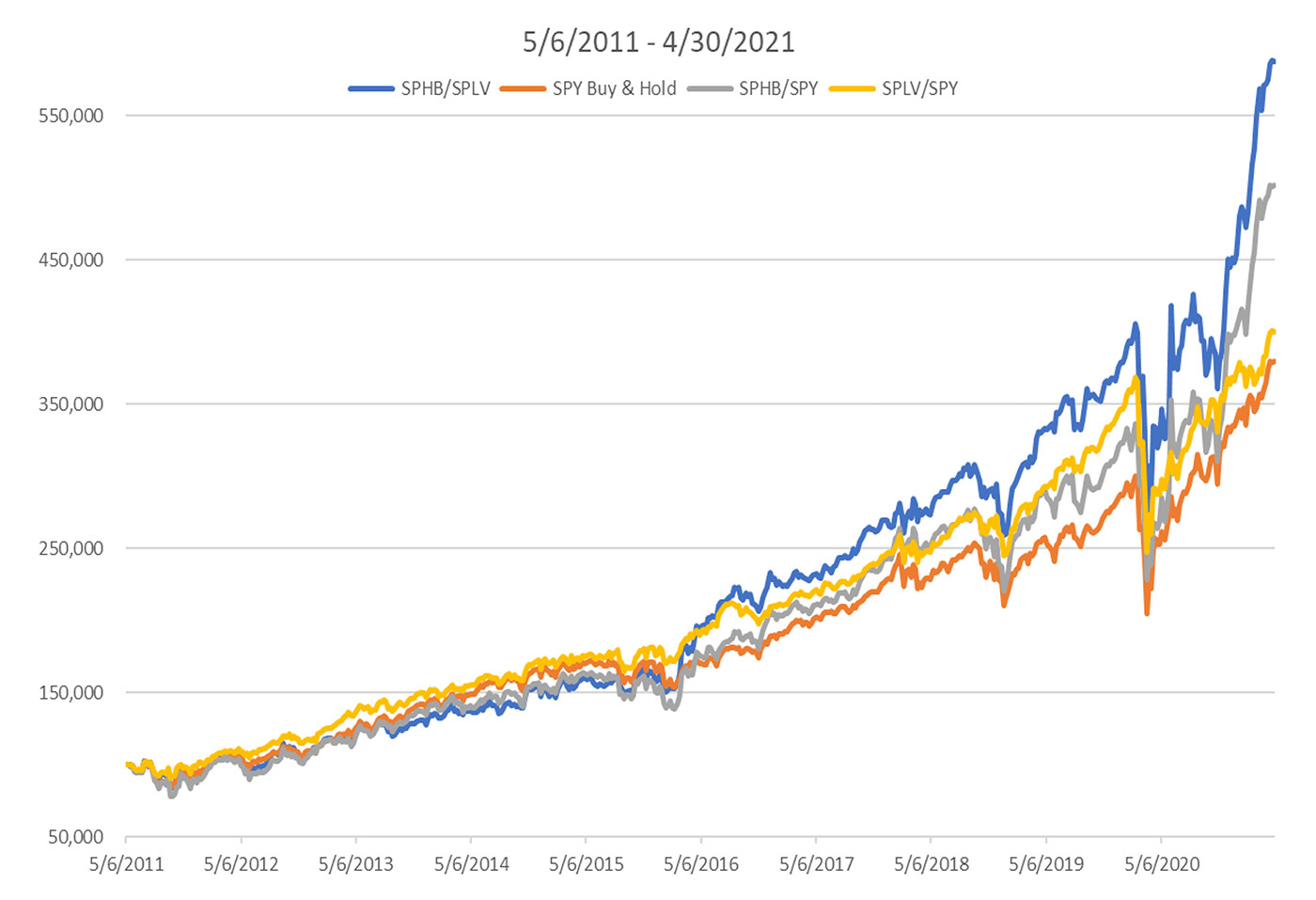