How to play the ‘Trump card’ when managing client portfolios

How to play the ‘Trump card’ when managing client portfolios

Risk management remains paramount in 2017, with markets likely responding unpredictably to the policies emanating from a new administration. Active strategies can help mitigate risk and volatility for client portfolios facing the “Trump card.”

When former Senator John Edwards ran for president in 2004, he was credited with coining the phrase “Two Americas,” in a now-famous speech at the Democratic National Convention. Perhaps nothing better represents the ramifications of this concept than election night 2016, when the electoral map lit up in surprising fashion.

Although it is not exactly what Sen. Edwards was referring to, The New York Times wrote on November 16 of last year, “For many Americans, it feels as if the 2016 election split the country in two.” Many would argue that the election represented the voice of an electorate deeply divided along core demographic, social, and economic lines and values.

How such a divided citizenry might impact economic confidence and growth during the new Trump administration is a bit of a wild card, and it is almost impossible to assess its impact on investment performance. Nonetheless, it should not be ignored. It represents one of the many potential and incalculable black swan events that could surface under an administration that was elected specifically to shake up the status quo and long-standing norms, policies, and even fundamental ways of conducting the business of government. 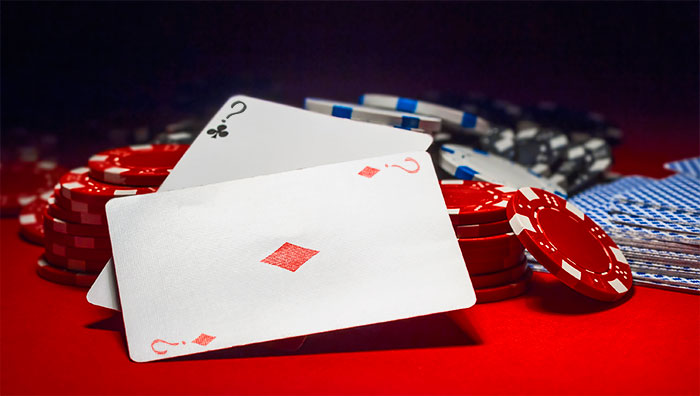 Markets typically do not respond favorably to uncertainty. President Donald Trump is like no other. He is an enigma. His lack of any prior governmental experience, and his personal entanglements with businesses around the world, possible conflicts of interest, ever-changing policy positions, and nonspecific details of such policies make him the poster child of uncertainty. Proof of this is demonstrated by the thousand-point swing in the Dow that occurred within the first 24 hours of the election. The people who rationalized the post-election surge are in the same class as the ones who argued why the market would get crushed if Trump were to win. Namely, the only valid prediction is that the market’s response to the new administration will be unpredictable.

Forecasts are powerfully influenced by the current momentum of the market. Therefore, they can change on a dime. Sentiment and momentum established during an administration’s honeymoon period is one thing. But, the question remains: How will the Trump administration impact markets beyond the honeymoon period, and how should investment advisors who favor active management help position client portfolios now that the “Trump card” is in play?

Although we know very few specifics of President Trump’s policies or his commitment to these policies, the market initially was projecting not only what his economic policies will entail, but also the likelihood that they will be enacted. The prospects for rolling back corporate regulations, coupled with both individual and corporate tax breaks, infrastructure spending, and incentives for corporations holding capital outside the United States to bring this money back to our shores made the market nothing short of giddy in the immediate post-election period.

In addition to the late 2016 leap higher in investor sentiment, the Shiller PE Ratio, a well-respected indicator of market value, was elevated in early January to a point that has only been exceeded in the last 75 years at the peak of the dot-com era. Honeymoons are great, but they do not last forever. All of this raises the question: What is an active investment advisor to believe and do? 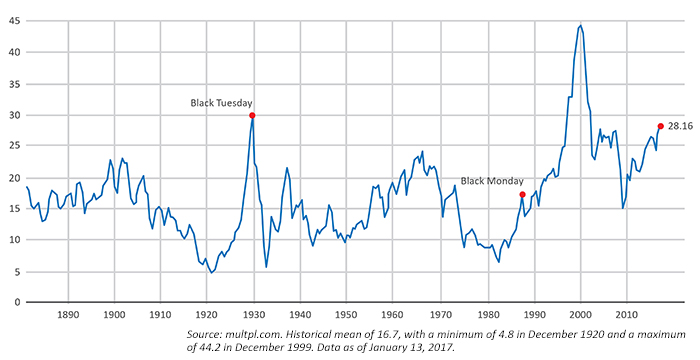 To provide some historical perspective, rallies following elections are not novel. According to MarketWatch and Dow Jones data, markets have risen more than 60% of the time from Election Day to inaugurations over the last 22 elections. When a Republican is elected, the average change has been a gain of 2.24%, but markets have usually reacted more positively to continuity for the presidential party in power.

From November 1980, when Ronald Reagan was elected, until his inauguration in January 1981, the S&P 500 rose 8.5%. However, during Reagan’s first year of office the S&P 500 dropped close to 10%, followed, fortunately, by eight years of market gains. Whether markets exhibit a similar “pop and drop” course after the Trump honeymoon remains to be seen.

Like Trump, but to a much lesser degree, Reagan was viewed as an outsider. He came to the office following the economic malaise of the 1970s, which resulted from surging oil prices and inflation, promising large-scale conservative growth policies. The market during the present honeymoon period is interpreting Trump’s pro-growth rhetoric as something of a redux of the Reagan revolution. Yet, early in Reagan’s term, inflation jumped to around 7% and later soared to 13.5%.

Determined to wring inflation out of the economy, Federal Reserve Chair Paul Volker increased the federal funds rate to 20% by June 1981. No matter how many of Trump’s policies overlap with Reagan’s on the surface, the economic backdrop for each coming to office could not be more diverse. As investment advisors, we must be careful projecting economic and related stock market success to the Trump administration based simply on comparisons with what Reagan was able to achieve.

The unprecedented monetary policies enacted since the Great Recession have resulted in interest rates plummeting to historical lows, creating a boon to passive and index investing. This mode of investing still has shown strength during the Trump honeymoon period, when momentum, breadth, and confidence have all skyrocketed. Because the economic climate in 2016 was the polar opposite of 1980, we should not assume that a simple asset allocation, buy/hold approach will be appropriate in 2017 and beyond.

Within merely a few weeks of the election, there were dramatic sector rotations. The U.S. dollar surged and interest rates rose. Treasurys lost tremendous value. Sectors that had largely underperformed, with financials the prime example, soon were indicating the greatest relative strength. Meanwhile, previously favored sectors such as high-dividend-paying equities and REITs started to lag. Dispersion has surfaced in the market post-election in a way that was not evident previously.

Further, because Trump seemingly represents a pro-growth agenda, while simultaneously promoting isolationism and protectionism, he is a wild card. As active investment managers, we should balance both the fundamental and technical indicators within the market with a Trump “overlay” that might at any time overwhelm and distort any of our rational research and analysis.

The three central themes that have bolstered market performance and confidence during the Trump honeymoon are (a) a more business-friendly regulatory environment, (b) infrastructure spending, and (c) tax breaks. As stimulative as these themes may become, none of them are necessarily as straightforward and positive as the market is concluding. For one thing, we don’t know what Congress will enact. Also, there are economic and demographic constraints beyond President Trump’s control that limit their efficacy.

With respect to tax reform for individuals, much of the benefit will disproportionately favor those in the highest tax brackets, with likely negligible benefits for consumers who are responsible for over 70% of the economy. In terms of corporate taxes, although the top statutory corporate tax rate is 35%, according to the Congressional Research Service, the effective tax most corporations actually pay is closer to 27%. Therefore, lowering the rate might not provide as big a bang for the buck as the market has anticipated.

Lowering taxes and building infrastructure will also likely result in greater federal debt. Currently, the federal debt, excluding unfunded entitlement programs such as Social Security and Medicare, is around $20 trillion, which is equivalent to about 100% of GDP. As a point of reference, when Reagan entered office, the national debt was only 30% of GDP.

With debt at this level and growing, any incremental increase in interest rates may be counterproductive. Furthermore, the market is viewing the possible enactment of Trump-favored policies as inflationary, which completes the feedback loop of further increases to interest rates and a strengthening dollar, all of which further negate the prospects for better exports. Promoting an “American First” agenda through real or threatened tariffs or trade barriers is likely to be met with retaliations that could negatively impact U.S. manufacturing and other areas of exports.

We have to also consider the impact on markets of the “Obamacare” repeal/replace. There are always unintended consequences of legislation, especially with something as sweeping as health care, which impacts virtually all Americans. The Affordable Care Act might well have restrained economic recovery during the Obama administration. But neither Trump nor the Republicans have articulated a viable replacement, notwithstanding the years they have had to consider one. A solution will not come easily, nor without market and consumer disruption.

The euphoria in the market during this honeymoon seems reminiscent of the Reagan revolution. Besides the dichotomy of economic backdrops that distinguish each of these administrations, unlike Trump, President Reagan had the good fortune of having demographics work to his advantage. At the start of his term, baby boomers were entering their peak spending years, thereby driving the economy and markets. Today, in contrast, thousands of those baby boomers are turning 65 every day, and they are withdrawing assets from Social Security and Medicare.

We have no other choice than to operate with the cards we have been dealt. The Trump card provides a hand the likes of which the world may never have seen before from a U.S. presidency. With so many potential black swan events from so many corners, anything is possible. No outcome, however radical, can be dismissed.

Within this framework, financial advisors carry a lot of weight on their shoulders helping clients pursue their financial goals. The next four years may be stressful for advisors and their clients. However, advisors who embrace active investment management should remain steadfast in their tactical, nimble, and unconstrained investment approach that mitigates risk and volatility, knowing that this could be the best way to play the Trump card for client portfolios.

The opinions expressed in this article are those of the author and do not necessarily represent the views of Proactive Advisor Magazine or LPL Financial. This material is for general information only and is not intended to provide speciﬁc advice or recommendations for any individual. The economic forecasts set forth in this material may not develop as predicted.