A historical look at rates, debt, and real liquidity

We continue to believe the summer rally has further to go as bond yields stabilize after a historically poor performance.

We have been talking about how similar the current environment is to the Federal Reserve-induced volatility in 1994 and 2018. In both prior cases, there was a solid start to the year in the financial markets until a more-aggressive-than-expected Fed caused a sharp rise in rates and a significant correction in equities. Like now, investor fear then became excessive. Long-term interest rates peaked in May and entered a trading range (Figure 1) that helped generate a summer equity rally that allowed the S&P 500 (SPX) to recoup a significant portion of the spring losses. 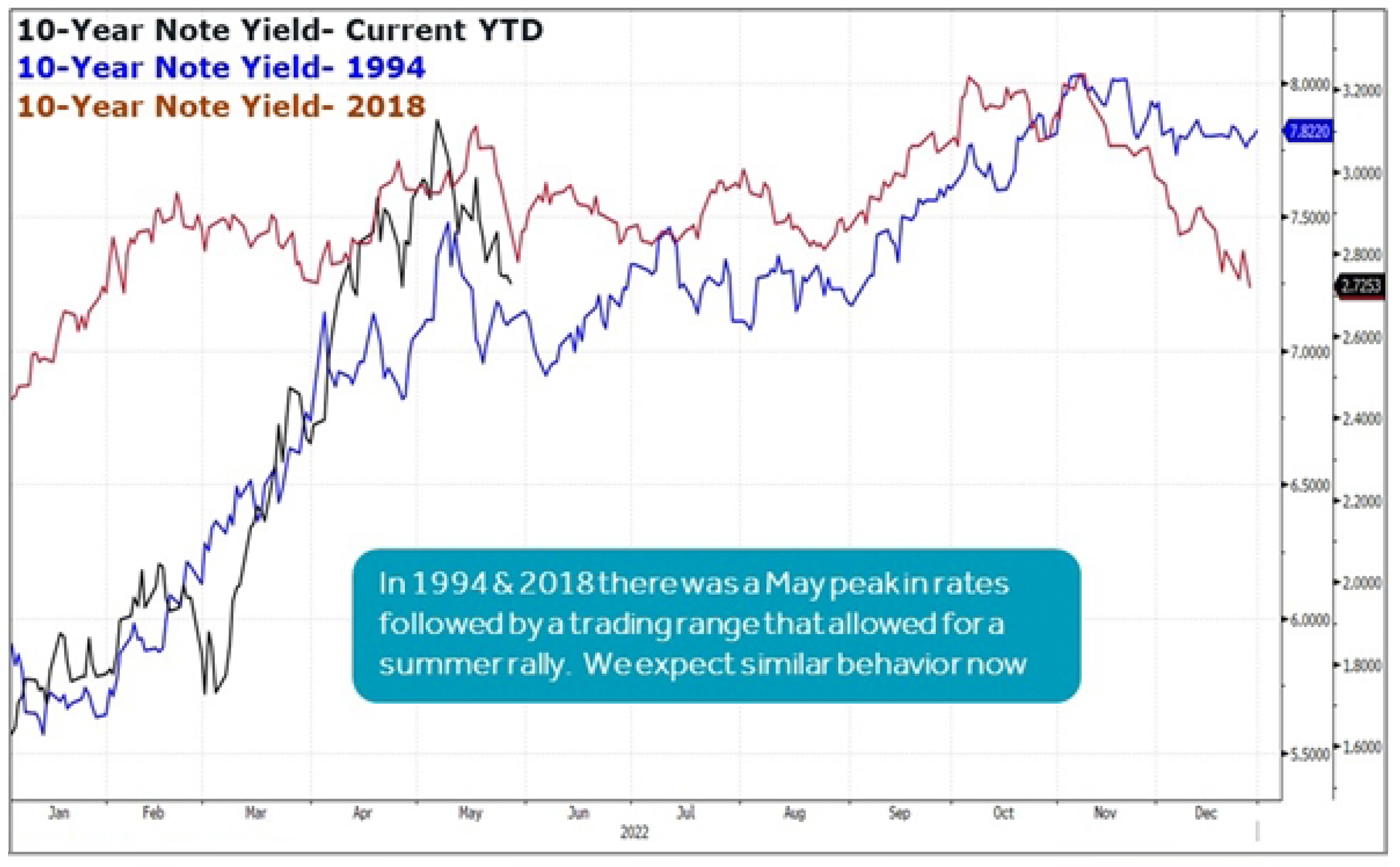 We might not want to use the Volcker playbook

We see no reason to change our market game plan for the rest of 2022.

We expected a tumultuous start to the year that would transition into a summer rally like 1994 or 2018 (or even 2000), followed by a “fall fall” due to the economic consequences of the Fed shutting down money availability.

We believe a replay of the Volcker-era monetary policy could be a mistake given the current debt-to-GDP level. Volcker was able to purposely induce a recession to break inflation without creating irreparable harm to the economy because the debt-to-GDP level reached a generational low, declining from 1955 to 1980.

The current debt-to-GDP level is near a generational high of 137% because the amount of debt created through lower interest rates to successfully emerge from each of the past four recessions hit new highs relative to GDP. The excessive use of debt through lower interest rates in each of the past four cycles lifted asset prices enough that they became unaffordable well before the peak rate of the prior cycle. Remember in December 2018 when Federal Reserve Chair Powell stated rates were nowhere near neutral? The next Fed rate move after that statement was a cut as real liquidity turned negative.

Let’s not forget Neel Kashkari’s comment following the May FOMC meeting: “. . . Based on the rise in mortgage yields from 3% to 5.25% this year, we have withdrawn accommodation faster than we gave it in 2020.”

The most recent money supply data seems to back that up given the recent historic drop, even considering there is a seasonal factor related to significant tax payments (Figure 2).

FIGURE 2: KASHKARI IS RIGHT—RECENT DROP IN M2 REVERSES THE 2020 RAMP

Ultimately, economic growth and increased investing come down to money availability for corporations and households. Our favored gauge of real liquidity—readily available money minus what is being used for economic output—is pointing to a sharp economic slowdown, at best.

A summer rally—similar to those seen in 1994 and 2018—would go a long way in helping generate an improved outlook in real liquidity. But it will take a clear signal change from the Fed to bring down market rates enough to sustain any improvement and avoid further weakness once we are done with the summertime oversold bounce.

For now, let’s enjoy the bounce and see how the inflation and employment data play out over the coming weeks and months.

This is an edited and condensed version of an article first published by Canaccord Genuity U.S. Equity Research on May 31, 2022.