As with the U.K’s Brexit vote this past summer, the U.S. presidential election saw the majority of pollsters and market analysts failing to predict a highly surprising outcome.

Many asset classes and specific investment vehicles saw wild gyrations in the days immediately following the election of Donald Trump, similar to the strong market reactions in the post-Brexit period.

Some are now calling this the “Trump growth rally,” while other market observers have significant concerns over potential issues surrounding possible deficit spending, trade wars, new tax policy, deregulation, immigration enforcement, and health-care reform (to mention just some of the major issues).

At this stage, the market’s reaction is largely speculative, as no one knows for sure the true policy intentions of a new Trump administration. But that has certainly not kept markets from reacting.

Bond yields soar
According to Yahoo Finance/Reuters, “Investors are anticipating that U.S. President-elect Trump’s policies will include lower tax rates and more infrastructure spending to grow the economy, but at the expense of a wider fiscal deficit and inflation.”

Related to this, Fed Vice Chairman Stanley Fischer said last Friday that “the case for removing accommodation gradually is quite strong.” This has led markets to assume that a rate hike in December is highly probable, as Fischer indicated that growth, employment, and inflation prospects are strong enough to merit a rate increase. The U.S. benchmark 10-year Treasury yield hit its highest level since last December, and the U.S. 30-year bond yield hit the 3% mark.

The irony is that fiscal stimulus and spending, financed by deficit spending, may cost the Trump administration more than it anticipated. Bloomberg quoted John Bredemus of Allianz Investment Management, who said, “As rates go up, funding costs go up and deficits get worse. The reality will kick in at some point that you just can’t get a lot of this stuff done.” 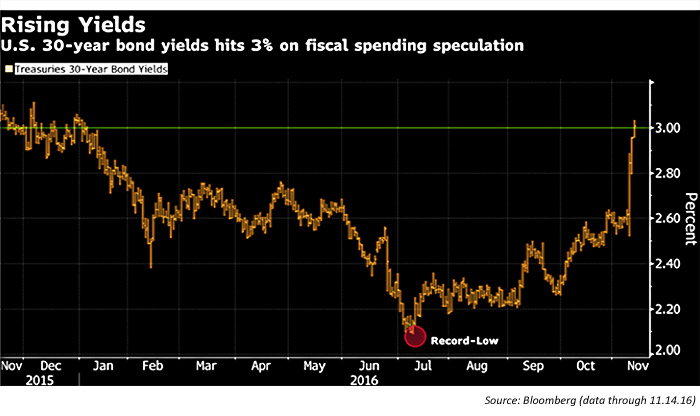 Gold has been pressured after the election by rising interest rates, a stronger U.S. dollar, and expectations that the Federal Reserve will raise interest rates in December. Gold has fallen to a five-month low and, according to MarketWatch, suffered its largest weekly loss in more than three years last week.

Said Jeffrey Hallet, senior analyst at foreign exchange company OANDA, via Firstpost.com, “When yields go up in the U.S., the appeal of other assets, such as gold becomes less. … I think with a stronger dollar and high U.S. dollar yields, gold is going to continue to stay under quite a bit of pressure now.”

The rise in U.S. bond market yields and the U.S. dollar led to investors pulling back from emerging-market equities and bonds. Livemint.com said,

“The old global market paradigm was based on the assumption that interest rates in the developed markets would remain very low for the foreseeable future. That narrative has changed dramatically. … The expected rise in U.S. interest rates led to money being pulled back from carry trades. … Trump’s protectionist views on international trade could also hurt emerging markets.” 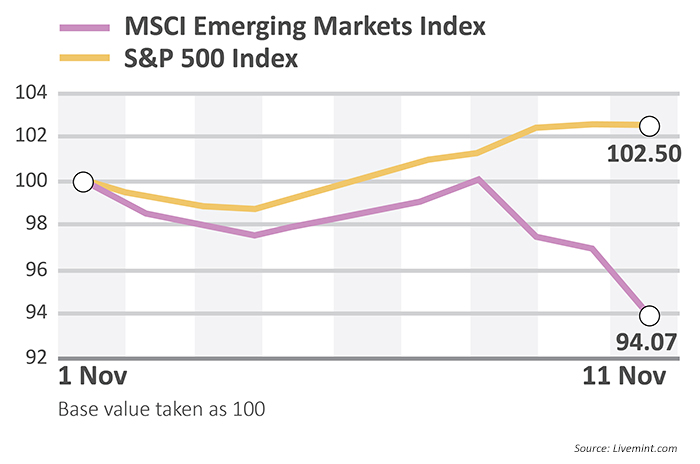 Whether the rally in financial stocks holds up or not in the short term, most analysts believe that at least four critical factors provide new tailwinds looking forward to the Trump administration: higher rates, higher inflation, increased business and infrastructure investment, and at least some level of financial deregulation. Financial stocks as a group rallied by about 11% in the week ending November 11. 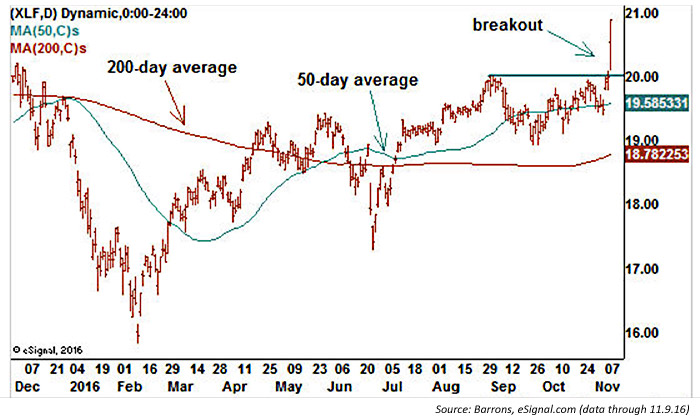