If you are a gold investor, then the one thing you want most is rising deficits. Luckily for you, Congress appears to have granted your wish.

Figure 1 compares the trailing 12-month federal deficit (as a percentage of GDP) to gold prices. The correlation is not perfect, but it is pretty good over time. The implication is that rising deficits should be bullish for gold prices.

That certainly was the case during the 2000s, following the supposed surpluses of the late 1990s. Those were not actual surpluses, as the total federal debt actually went up in every one of those years. But for federal bookkeeping purposes, they were counted as surplus years. And gold prices certainly did poorly while that was going on. 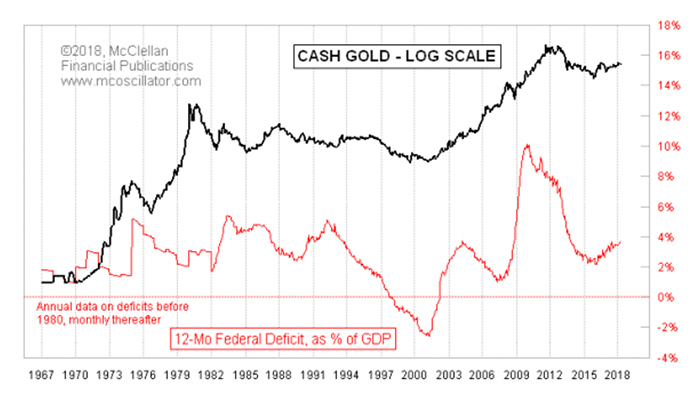 After the 9/11 attacks, when the U.S. suddenly realized that the shortfall in military spending during the 1990s might not have been a good thing, suddenly the deficits started rising again. And so did gold prices. It helped gold that the Bank of England was ending its sales of central bank gold bullion in 2001. Their sales of gold from 1999–2001 had a depressing effect on the gold market, and so stopping those sales gave the gold market some relief.

The generally rising deficits of the 2000s led to the gold price top in 2011. Since then, Congress’ feeble attempts to live within its means have helped pull gold prices back downward.

But now Congress has given up on that silly, old-fashioned notion of having a balanced budget, and gold prices are starting to rise again. The revised tax tables for 2018 have not really started to have a big effect yet on the 12-month trailing total of federal tax receipts, but in the months ahead we can expect that factor to start bending the receipts line lower, and thus the deficit line higher.

If the demonstrated correlation of the past 40-plus years continues in the future, then the presumptive higher deficit rates should be bullish for gold prices. And that should continue right up until the point when Congress realizes that running a “ginormous” debt might not be a good thing, at which point we should see another major top in gold prices. Congress does not seem to be anywhere near the point of making that realization, and so the message for the gold bulls is that it is game on, and gold should be making a big general uptrend.

This article was first published by McClellan Financial Publications on April 26, 2018.