We entered 2018 with the idea there would be periods of increased volatility as a result of historically high market and economic optimism, coupled with historically low Fed-policy fear as measured by the Monetary Policy Uncertainty Index. We see no reason to change our view that as long as an inversion of the yield curve has not shut down credit, and the direction of EPS is going up, we want to use any weakness as an intermediate-term opportunity to add exposure for a move to 3,100 in the S&P 500 (SPX), concentrated in the financials, information technology, and industrial sectors.

It has been nine years since both the economic recovery and bull market began. The length of the recovery always raises the question, “How much longer can this go on?” If any cycle has ever proven there needs to be an inversion of the yield curve to generate a recession given the many headwinds investors have faced, it is this one. In fact, the San Francisco Federal Reserve recently did a study that found the best indicator for recession is still an inversion of the U.S. Treasury yield curve. The current spread between the 2-year and 10-year U.S. Treasury yield is 61 basis points. Clearly, the most recent 12% “shock drop” shows there can be nasty corrections along the way, but history shows (1) “the” peak in the SPX is a median 18.5 months after an inversion, and (2) a recession happens 19 months following the initial inversion (Figure 1). Using the last three cycles that are much more similar to the current, the median months until “the” SPX peak and recession were 22 and 24 months, respectively.

FIGURE 1: ‘THE’ SPX PEAK AND RECESSION COME WELL AFTER INVERSION 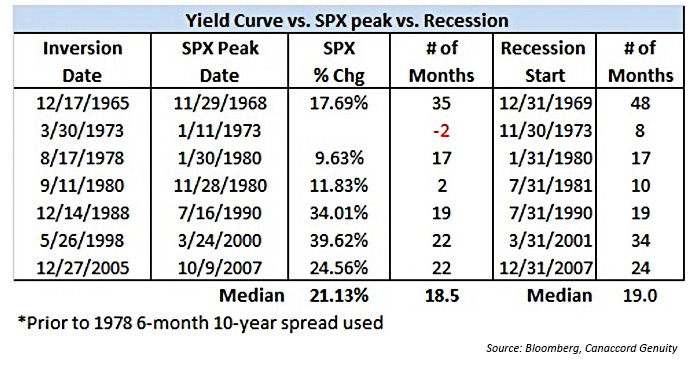 High volatility and corrections should still be bought

Our fundamental core thesis remains firmly in place despite the volatility of recent weeks. Sure, there is increased Fed angst, but that should be expected given their dot plot, Fed minutes commentary, and accelerating economic data over recent months. Ultimately, only an imminent credit-driven recession should cause investors to truly adopt and maintain a defensive posture, as the earnings-per-share (EPS) trend would then look to turn negative. If anything, the biggest bump up in long-term interest rates pushes out the negative scenario further into the future.