While much of the financial media has focused on Tesla’s dramatic stock price rise over the past year, recovery and growth in the U.S. economy are far more tied to the overall automotive market.

But it is hard to ignore the Tesla stock story.

“Love it or hate it, there’s no denying that Tesla’s stock is on a roll.

“Since the company went public in 2010, its shares have ballooned more than 20,000%, comfortably outpacing the market as a whole, consistently obliterating Wall Street’s expectations, and turning early investors into millionaires.

“To say that pace of growth is out of the ordinary would be an understatement.

Tesla’s story aside, the global automobile market suffered a significant decline during 2020 due to the weak economic conditions related to the COVID-19 pandemic.

Data and analytics provider Statista reported at the end of January,

“As the coronavirus crisis unfolded, spreading from China to the rest of the world in the early months of 2020, things went from bad to worse for the global car industry. What started off as a supply crisis, which temporarily constrained access to parts and raw materials sourced from China, turned into a full-fledged demand shock that saw sales tumble in the face of mass unemployment and financial uncertainty.

“As the following chart [Figure 2] shows, the world’s largest automobile markets suffered significant sales declines in 2020, with the Chinese market furthest along on the road to recovery. According to the China Association of Automobile Manufacturers (CAAM), vehicle sales rose for the ninth consecutive month in December, limiting the overall decline for 2020 to -6 percent. Meanwhile light vehicle sales dropped 15 percent in the United States, while the EU suffered a 24-percent drop in new passenger car registrations in 2020.” 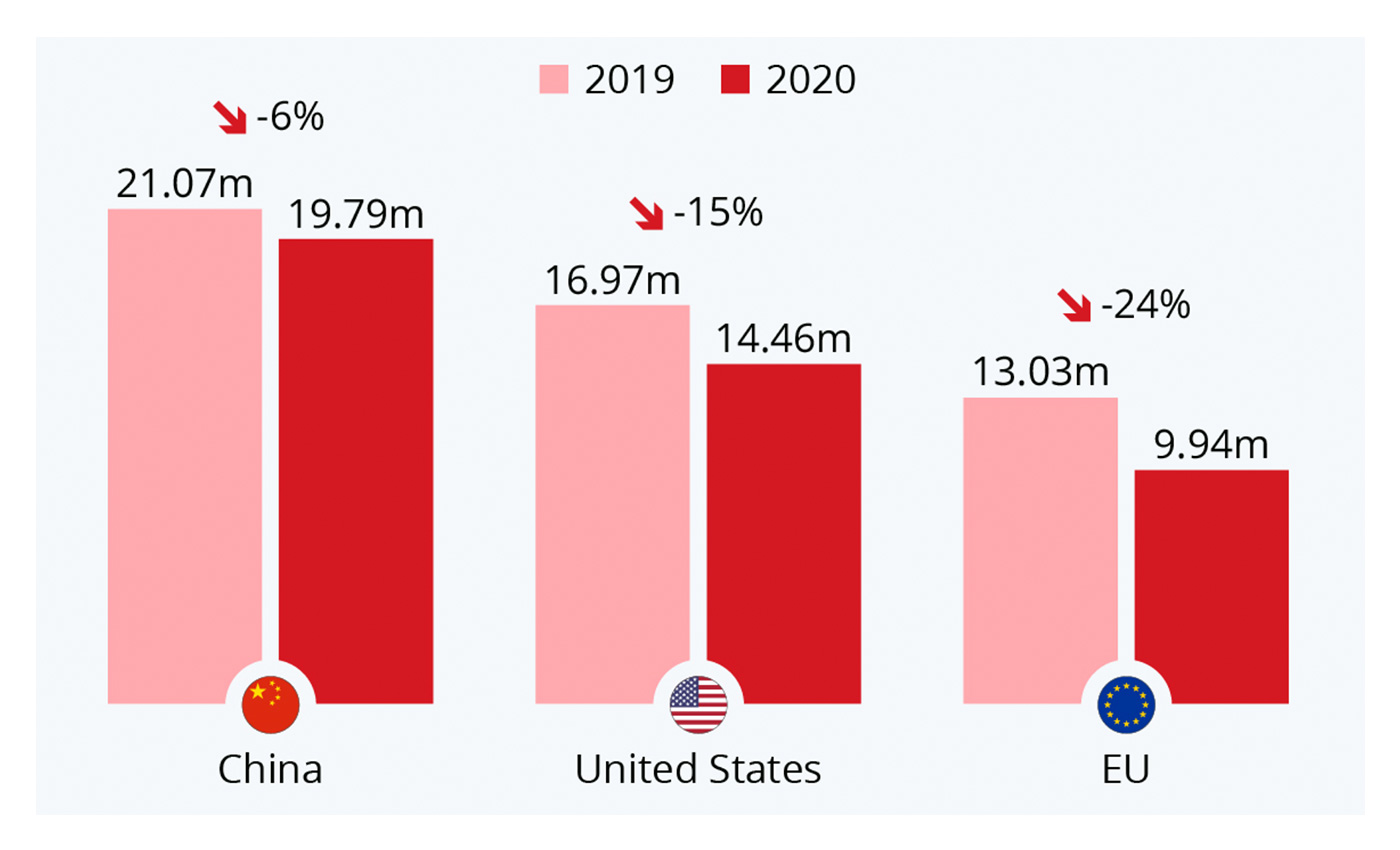 Sources: Statista; based on data from BEA, CAAM, ACEA

Looking forward to 2021, most industry analysts see a solid rebound from 2020, assuming the COVID vaccine rollout gains momentum and the employment situation in the U.S. continues to improve.

“Automotive executives and analysts are cautiously optimistic that U.S. vehicle sales will return to some form of normalcy in 2021. Early forecasts for new vehicle sales this year range from about 15.5 million to 16 million vehicles, which would be an increase of between 7.6% and 10.3% compared with 2020.

The Bureau of Economic Analysis released their estimate of U.S. light vehicle sales for January 2021 last week, which exceeded going-in projections. According to the report, the BEA estimates sales of 16.63 million SAAR (seasonally adjusted annual rate) in January, up 2.5% from the December sales rate and down 1.5% from January 2020. 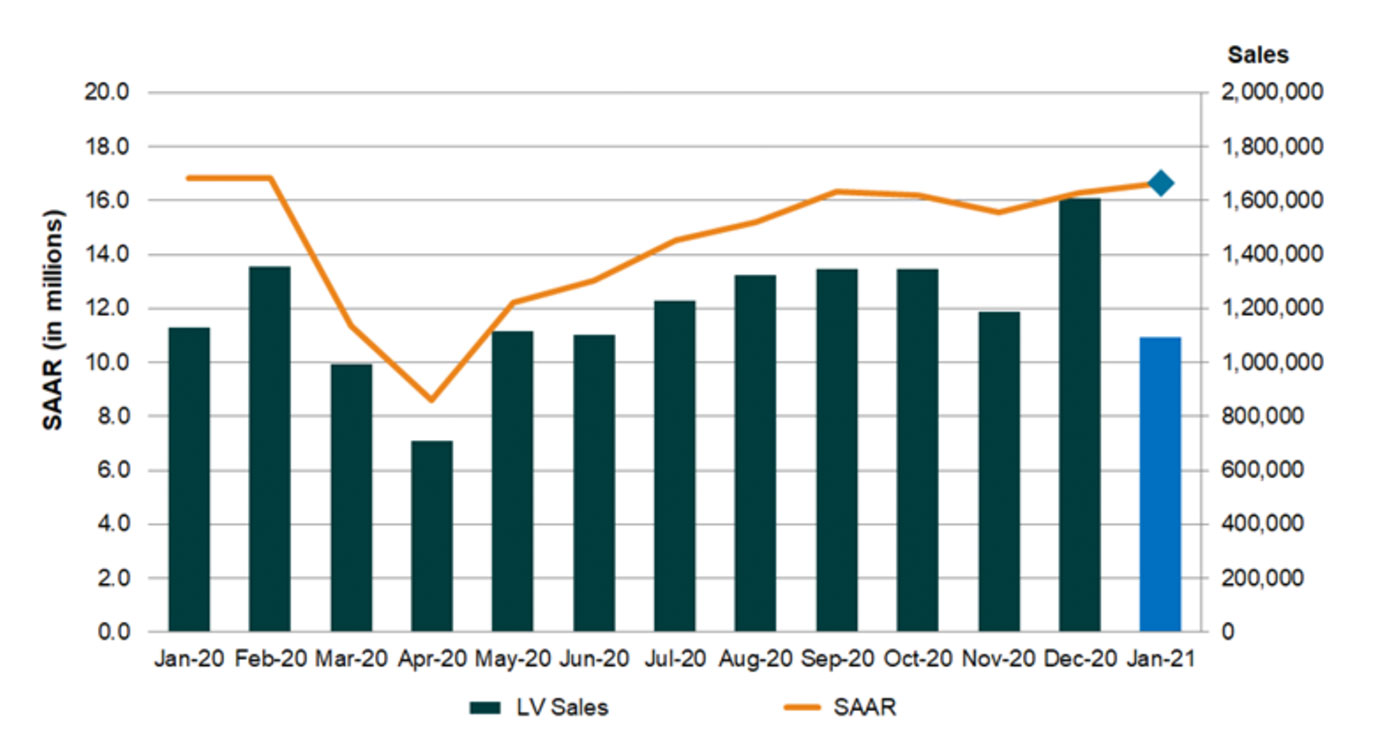 While Fitch Ratings has “an improving outlook for the U.S. auto sector,” it stated in December,

“Although the trend will be improving in 2021, sales are expected to be about 8% below 2019. Fitch does not expect sales to return to 2019 levels until 2022 at the earliest even if a coronavirus vaccine becomes widely available by mid-2021.”

Fitch notes several challenges and unknowns for the auto industry—beyond the pandemic:

“Despite an improving demand environment, the auto industry remains exposed to various secular pressures. For example, tightening emissions regulations in many global markets, especially China and Europe, are rapidly accelerating the pace of vehicle electrification. Dozens of new electric vehicles will be introduced over the next few years, but vehicle cost and customer acceptance remain challenges.

“Auto manufacturers, suppliers and others also continue to invest heavily in automated driving technologies, although the pace of development has been slower than expected. Technological, regulatory and social issues continue to impede a faster rollout of autonomous vehicles.”

Partnering with clients to ‘protect, grow, and enjoy what matters most’

Eric McGough, CLU, ChFC, RICP • Greenwood Village, CO Resolute Wealth Partners • Northwestern Mutual Read full biography below Proactive Advisor Magazine: Eric, talk about how your career has progressed. My father was a CPA and my mother worked in the airline and oil...

Why ‘personal benchmarks’ are important for your investment clients

When clients measure their investment progress against personal benchmarks—not some media-inspired number that does not represent their risk profile and investment time horizon—it helps them maintain realistic expectations for long-term growth within their investment...

ne of the cumulative breadth indicators that we follow is cumulative volume breadth (CVB). It is the running daily total of volume on advancing issues minus volume on declining issues. While it can be...

How teaching can make you a more effective financial advisor

Stephen Franklin, MBA, CFP, RICP, CFS, CEP • Louisville, KY Kentucky Planning Partners (KPP) • LPL Financial  have been an independent financial advisor since 1984 and have always had a passion for...