Lessons from ‘the best investor in the world’

Lessons from ‘the best investor in the world’

We counsel our clients not to worry about what other people are doing in the short term, even if one of them might be considered “the best investor in the world.” We would rather focus on our clients’ specific investment objectives—and the health of their retirement portfolio over the long term.

On average, the market goes up three out of every four years. The “perma-bear” who consistently preaches doom and gloom is forgotten each day until he is right. Then they put him on the news and ask how he “called” the top of the market.

How did he do it? Well, probably because he’d been “calling it” every day for the last decade.

Then there are legends in market lore, like Warren Buffett, who many consider to be the best investor in the world. With a nickname like the Oracle of Omaha, how could anything else be true? Want to find out? Read on.

Let’s start with the mortgage crisis, the Great Recession, the 2007–2009 market crash … whatever you want to call it.

Over this period, the S&P 500 (which we’ll call “the market”) was down almost 58% at its worst drawdown. As you can see in Figure 1, Buffett, as represented through the performance of Berkshire Hathaway’s Class B stock (BRK.B), was down about 55% from top to bottom.

Let’s move on to the first real scare in the market after the crash, which took place in 2011 due to the U.S. Treasury downgrade. Understand that the downgrade didn’t take place until late summer, which was when the market’s wheels started to come off. Yet, Buffett’s Berkshire stock struggled earlier and longer. In the end, its decline of 24% was worse than the market’s 19.9% drop.

One of the roughest two-year periods recently was the 2015–2016 “double whipsaw.” The market dropped more than 12% in 2015 and then dropped about 13% between fall of 2015 and winter of 2016. In the end, the market was down roughly 14% from top to bottom and went nowhere for almost two years. You can see in Figure 3 that during this same period Buffett’s stock never got the bounce that the market did, causing underperformance and a total drawdown of almost 19%.
FIGURE 3: BERKSHIRE HATHAWAY (BRK.B) DURING 2015–2016 ‘DOUBLE WHIPSAW’

Moving forward to the present day, we can see how Buffett’s stock has done in the current environment. It’s pretty much gone nowhere in the last 20 months (beginning of 2018 through mid-August 2019). While the stock market as a whole hasn’t been anything to really cheer about, it was up just over 6% during the same period.
FIGURE 4: BERKSHIRE HATHAWAY (BRK.B) FROM JAN. 2018 THROUGH MID-AUG. 2019

So, what’s the point of all of this? It’s definitely not to disparage the Oracle of Omaha. The wealth he has built for shareholders over the years is impressive.

By his standard of benchmarking, both the per-share book value and per-share market value of Berkshire has outperformed the S&P 500 on a compounded basis by a wide margin (about double) over the period 1965–2018.

I have three points.

First, even those considered to be the best investors (and company executives) in the world are not necessarily knocking it out of the park all of the time.

Second, the vast majority of what advisors and their clients often hear—from friends, neighbors, co-workers, and even family—is mostly just noise. I call it “The Country Club Effect.”

Whenever someone tells you how great their portfolio is doing (especially if they’re managing it themselves), be skeptical. Everyone wants to be a winner. (This includes just about all of us—even advisors. We all want to be a winner, whether for our own portfolios or those of our clients.) When clients hear that someone might be doing better than they are, the immediate psychological response is to become defensive.

In reality, those friends or associates probably aren’t Warren Buffett, and maybe they’re not doing as well as we think they are. Instead of reacting to the noise, stay focused on the long term. Your focus is something that you can control—and something you need to constantly reinforce with clients.

Third, while Mr. Buffet compares Berkshire’s performance to that of the S&P 500, that is almost certainly not the benchmark that individual clients should be using as they build toward their retirement. Who wants to use a benchmark that has proven its ability to drop around 50% twice this century alone?

As Table 1 shows, every decade since 1920, with the exception of the 1990s, has had at least one market decline over 20%. Most of those declines were much worse. 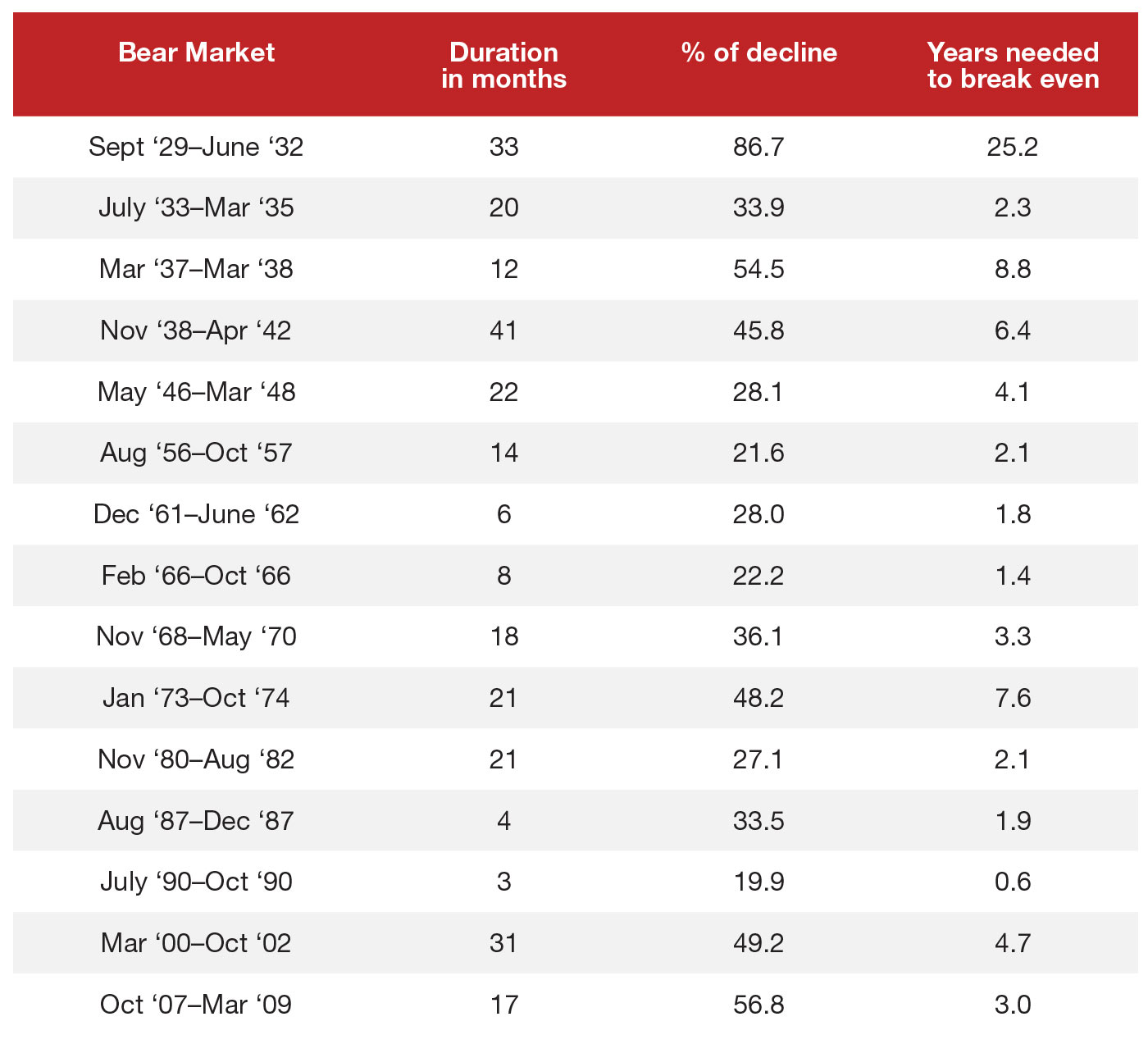 Why is this critically important? Because the impact stemming from an unfavorable sequence of returns could be substantial.

When significant portfolio losses occur for any given investor is at the heart of the theory for the sequence of returns. The argument goes that a 25-year-old, with 35–40 years of earning and saving years in front of them, can afford to “ride out” stock bear markets. This assumes they never sell out at or near the bottom, as so many people do, nor make significant withdrawals from their portfolios.

However, for someone about to enter retirement and begin the distribution phase, as opposed to accumulation, a 25%–50% hit to their retirement funds early on will wreak havoc on their planned withdrawal rates. There is a good chance their funds will no longer last throughout a lengthy retirement.

In my opinion, and as demonstrated by the way I work with clients, I believe risk-managed strategies can benefit investors of all ages. When it comes to managing money, our firm focuses first on risk management, defending a portfolio from losses. This doesn’t mean being overly conservative—but a great offense without an equally great defense achieves little for clients in the long run.

We want to participate as much as possible when the market weather is good. Even when market “rainstorms” come along, like the ones we’ve lived through since the fall of 2018, it’s still just a rainstorm.

Tornadoes, on the other hand, are something we want to avoid.

When the sirens go off, we want to take our clients’ retirement portfolios to shelter to avoid catastrophic loss, even knowing that there is a good chance the tornado might not touch down.

Retirement planning is a marathon, not a sprint. We counsel our clients not to worry about what other people are doing in the short term, even if one of them might be considered “the best investor in the world.”

Adam Koos, CFP, CMT, is the president and portfolio manager at Libertas Wealth Management Group, Inc., located in Columbus, Ohio. Mr. Koos is a graduate of Ohio State University and has earned degrees in psychology and finance. He has been named one of Central Ohio’s “People to Know in Finance” by Columbus Business First. Mr. Koos founded Libertas Wealth Management in 2001, achieving local and national recognition for his firm. www.libertaswealth.com