More on trend following (and why it’s not always easy) 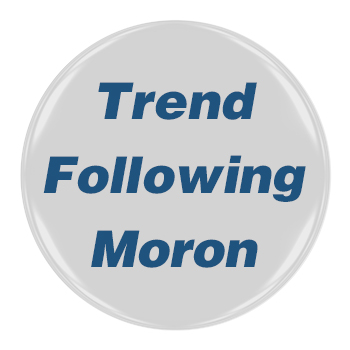 Back in the roaring 90s, I received an email from someone who was heavily short the market. They called me a “trend-following moron,” along with some even nastier things. Apparently, I irritated them because I was drawing big blue “up” arrows* on the charts. Initially, I was offended, but I soon learned to wear it like a badge of honor—literally. I had “Trend Following Moron” buttons made.

This has stuck with me through the years and has kept me from trying to outsmart the markets on new positions and holding on to old positions, even though the trend has obviously ended (i.e., past my stop). It also has kept me from “confusing the issue with facts.” There’s always a legitimate reason to exit a market and rarely a reason to stay. This can be something technical like a normal and often healthy correction (read further), or extraneous information such as a pending news event, worsening fundamentals, the economy, or quite simply the daily malaise—which seems to be increasing at an alarming rate recently.

It’s not easy being a trend follower. No one knows exactly where a market is headed—not you, not me, and not the guy who screams on TV. Like predicting the weather, only short-term market forecasts are viable. That’s OK and can actually be a good start. If you catch a short-term move on an existing or emerging trend, you can then stay with it as long as it moves in your favor via a trailing stop. Trends are tough to predict, but the good news is that you can follow them forever.

THE THREE FUNDAMENTAL STATES OF THE MARKET 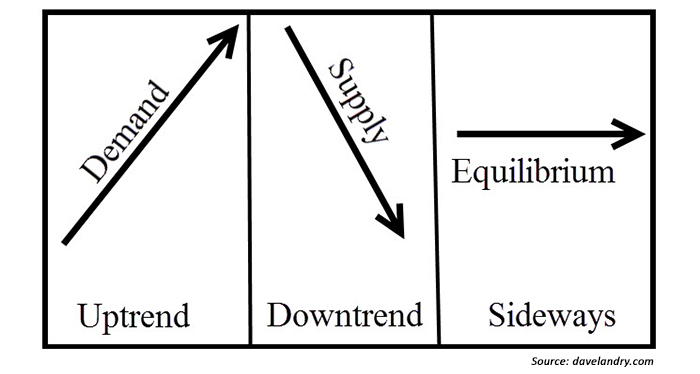 Trends are tough to hold on to. The best analogy for this phenomenon was coined by well-known trader, author, and entrepreneur Michael Covel, who equated riding a trend to riding a bouncing bronco.

You have to be willing to put capital into harm’s way when an opportunity to get on a trend presents itself and then leave it there until proven otherwise. If you bail out at the first signs of adversity, then you’ll never catch a meaningful trend. Why? Because all trends—even great ones—will have healthy corrections along the way.

I used the term “healthy” because corrections, though painful, can help sustain trends. They knock out the nervous nellies and attract eager shorts. Should the trend resume, these players will be forced to “put up or shut up” or “buy to cover,” respectively. This action can help to propel, and occasionally even accelerate, the trend higher. Obviously though, sometimes what starts out as a correction turns out to be the beginning of something much bigger. Therefore, you must have an “uncle point” where you are obviously wrong and exit accordingly.

When trends end you’re not going to look very smart. That’s OK. It comes with the territory. In fact, all trend trades eventually end badly. We don’t get paid to look smart—leave that to the top market gurus. We get paid to catch trends. The old hedge fund adage “he who fights and runs away lives to fight another day” comes to mind.

Never forget that the only way to profit from a trade is to catch a trend. Therefore, I think we’re all trend followers whether we admit it or not. And, if you do label yourself as contra-trend, then a new (opposite) trend better come along soon.

So, where’s the trend now?

See Related Article: The essence of trend following: What is, is

There’s around a one-week delay between the submission of this article and the publication date. Therefore, I’m always concerned about making any prognostications. I can tell you this, though: the S&P and NASDAQ are both at or near all-time highs, and they both remain in solid uptrends. Nearly everything technology-related remains in an uptrend and is also at or near new highs. Ditto for many other sectors, including Materials & Construction, Health Services, Financials, and Insurance. As long as the indexes and most sectors remain at or near new highs, our job remains simple. Don’t try to outsmart or outguess. Be a “trend-following moron,” and just follow the big blue arrows.

(*The arrows were blue simply because my design program back then defaulted to blue.)