Understanding the impact of the dreaded ‘death cross’

Editor’s note: As can be seen in the following chart, the 50-day simple moving average (SMA) for the S&P 500 (SPX) has consistently stayed above the 200-day SMA since early 2016, though daily price action for the SPX has tested the 200-day SMA several times. Inevitably, a crossover of the two averages, commonly called the “death cross,” will happen again. Does this indicator provide an edge to investors? Contributor Ian Naismith examined this issue for Proactive Advisor Magazine in December 2015. His analysis is presented here.

Well, it finally happened in 2015—the death cross occurred across the “four horsemen.” Yep, that ominous event when the 50-day simple moving average crosses below the 200-day moving average—the event that sends chills down the spine of most bulls. First, it was the Dow 30 on July 22. Then, the Russell 2000 on August 18. Then, the S&P 500 index on August 28. And finally, on September 4, it happened to the NASDAQ 100. The onset of Armageddon was in place right in time for the arrival of Halloween. 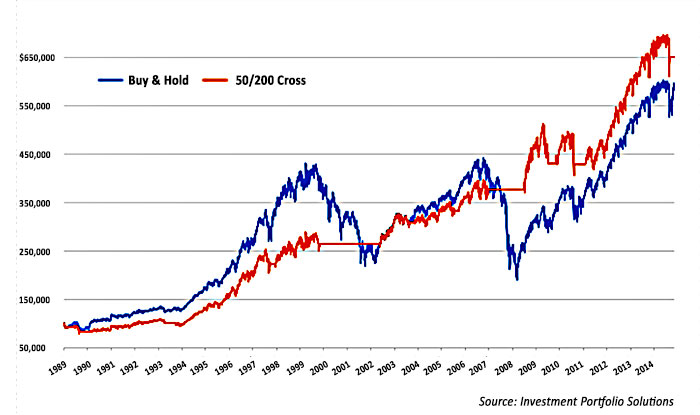 If you were to have traded based only on the 50/200 death cross and its opposite event —the golden cross—then your 2015 results through early November would have ranged from -1.3% to -4.9%, depending on the index. Sure, if the indexes had continued to decline into the abyss, these would have been acceptable numbers. The reality is the death cross news flooded the airwaves as markets were beginning their retreat down. Talking heads on the tube and at financial conferences made reference to the market decline signaled by the death cross, exuding a sense of confidence as if it is a “sure thing” indicator.

However, the value of exiting at the death cross is the reduction of portfolio destruction. There is only one time when the drawdown was deeper than 20% using a death cross “exit plan.” (It started on that infamous day in 1987, which was down more than 20%.) But, the buy-and-hold investor has had to endure nine major drawdown events below -20% before markets climbed up to make another new high—with five of those events below -30%, two below -40%, and one below -50%. No one wants to tolerate that kind of pain. Therefore, paying attention to golden-cross and death-cross macro events should be considered “bypass deep drawdown insurance.” The cost of insurance is the latency of entering after the golden cross.

Looking deeper into various death crosses, here are the results for the past 54 years. Doing a quick analysis of every combination of moving-average crosses with a minimum of five days and a maximum of 200 days, the most-used death cross of 50/200 is ranked #6 for the past 54 years. The 60/190 is ranked #1, with $1 growing to $46 and a -31% max drawdown and 79% accuracy.

This goes to show, like any other indicator, different time cycles call for different iterations. The extremely hard part is detecting and benefiting from those changes in time.

This article first published in Proactive Advisor Magazine on December 10, 2015, Volume 8, Issue 10. Some content has been updated to reflect current data.