In the search for the latest, greatest trading system or strategy, don’t neglect the one system that has been proven to work over the long run.

What if there was one investment approach that guaranteed you would always be invested during sustained upward moves of your selected investment or asset class and would miss the majority of a major downtrend?

Naturally, there would be some negatives to the approach.

Not every trade would be successful. In fact, you would experience periodic whipsaws and losses when the market changes direction only to reverse itself a little later. In strong, rising markets, performance would likely lag that of the major indexes. The wisdom of the investment approach might take years of somewhat lagging performance before a market downturn triggers a significant performance payoff.

Perhaps most disconcerting, staying the course would require ignoring much of the financial news and the omnipresent forecasts of market professionals. It would require admitting you have no idea what is going to happen next and shutting down your emotional responses to economic and political events. It would remove the “gaming” element of investing, turning it into a discipline versus an art.

That one investment approach is trend following. It’s been around for well over 100 years, takes advantage of the phenomena of performance persistence and is, in many ways, Isaac Newton’s first law of motion applied to financial markets. To paraphrase, “An object in motion tends to remain in motion until acted upon by an outside force.”

See Related Article: ‘Picking up the team’: How diversified investment strategies work together

What do investment professionals think about trend following?

Michael Covel, bestselling author, financial educator and trader, and founder of TurtleTrader.com and TrendFollowing.com has written:

“Universities teach fundamental analysis and the efficient market theory–both dead ends to actually making money. The great trend traders do the exact opposite. Believe it or not, there are literally only a handful of finance professors at U.S.A. schools who even know about the existence of trend-following trading. …

“Trend following aims to capture the middle, or meat, of a market trend, up or down, for profit. You will never get in at the absolute bottom or get out at the absolute top. …

Perhaps it’s because trend following just isn’t, for the lack of a better term, sexy. In fact, it can be downright boring. There’s no opportunity to pit one’s intellect against the wiles of the market, to perceive what others have missed, to find great investments before the crowd, or just to take advantage of mispricing due to the mistakes of others. Imagine the nightly business news without the astute (and typically incorrect or vastly oversimplified) explanations of market moves during the day.

David Moenning, a past chairman of the National Association of Active Investment Managers (NAAIM), stresses the importance of trend following in his investment strategies.

“While there are challenges to a trend-following approach, not the least of which is ‘sticking with it’ when the market is experiencing a mean-reverting phase, one of the primary keys to the methodology is that unlike so many other indicators, price cannot deviate from itself,” he explains.

“It is for this reason that I place a fair amount of ‘price trend’ indicators into my market models. Trend following systems are the ultimate ‘stop loss’ triggers if other indicators are ‘fooled’ or ‘confused.’ To be sure, one should never use any indicator in a vacuum and, in my humble opinion, diversifying by indicator methodology is mission critical. But, given that ‘markets are never wrong,’ trend following—or better still, multiple trend following systems used in conjunction with other indicators—is an important part of any market model.”

The many advantages of trend following 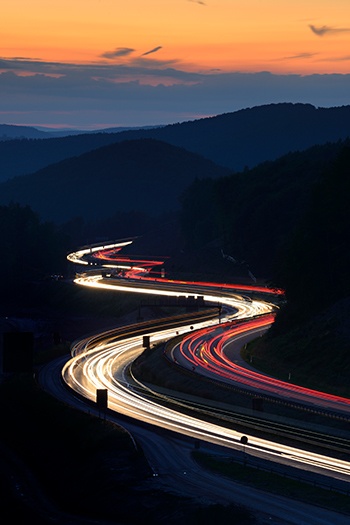 The potential negatives of trend following are often the result of “cognitive dissonance”—the behavioral and emotional conflict created when the need for patience and inaction run up against the strong desire to “do something.” It is important, therefore, to periodically reinforce the many advantages of a trend-following approach for advisors and their clients.

The 200-day moving average positioned the investor on the right side of the market during major up- and downtrends in the period examined, but did encounter whipsaw trades (shown in gold) when market direction was less definitive. 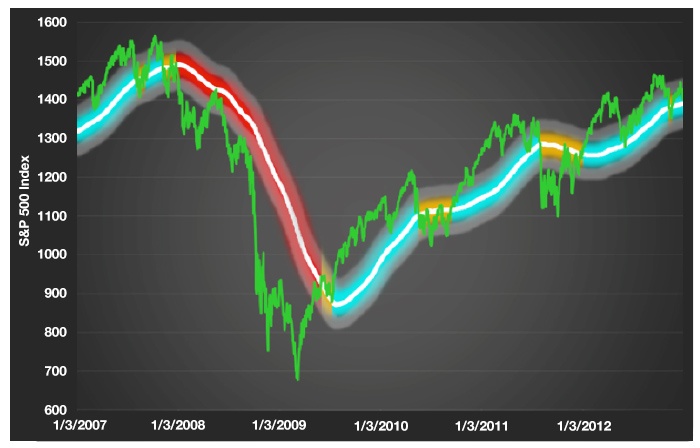 While trend following can be complemented by different strategies and investment signals designed to target potential investments and monitor market risk and opportunity, it can be perhaps the most important tool in an active investor’s or active manager’s toolkit.