Buy and hold is a young person’s game

For older workers and retired investors, the odds are against winning with a buy-and-hold game plan

The statistics are familiar. According to the Federal Reserve’s Survey of Consumer Finances, the typical working family headed by someone in the 55-to-64 age group has only about $104,000 in retirement savings. For 78% of public-sector workers and 67% of unionized workers, pension coverage will provide at least modest retirement funding (with the caveat that many pension plans are underfunded). In the much larger private sector, only 13% of employees are covered by a pension. That leaves many individuals scrambling to save for retirement, without a lot of options for growing their investments annually above a low-single-digit rate of return.

The good news for financial advisors is that the average client has recently taken a much more aggressive approach to saving. But for most clients nearing or in retirement, making their savings last as long as possible will depend on how much those savings earn. Under the current low-interest-rate environment, targeting higher returns inevitably leads to equity investing. Stocks, as we all know well, tend to outperform other financial assets like bonds, CDs, and Treasury bills by a wide margin over the long term.

The age-old rule of thumb that investors should subtract their age from 100 and keep that percentage of the portfolio in stocks is going by the wayside. Many financial advisors have been recommending higher equity allocations since the financial crisis to help make the retiree’s money last longer. But when that advice is combined with a buy-and-hold investment approach, the result can be disastrous. 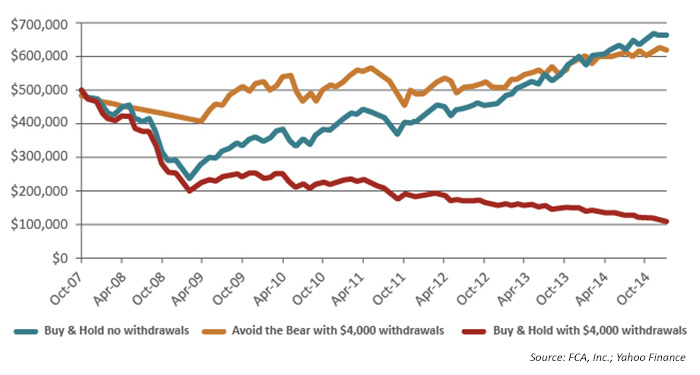 The advantages of active management for retirees

Buy and hold is a young person’s game. Individuals who are retired or on the verge of retirement don’t have the time or opportunity to make up losses from bear markets. When bear-market losses are combined with the need to withdraw funds from retirement savings to meet living expenses, retirees’ savings can erode very quickly. The answer to the catch-22 of needing the stock market’s earning potential to make one’s retirement savings last as long as possible and the reality of bear markets is active management.

Here’s why: The “safe” withdrawal rates of 4–5% of retirement assets each year are based on surviving the impact of market drawdowns on a buy-and-hold portfolio. Limit losses and the investor can maintain a higher withdrawal rate without running out of money.

The most recent U.S. bear market of 2008–9 demonstrates the active advantage for retired individuals who need to withdraw funds from their accounts to meet living expenses. The S&P 500 lost value in eight out of 12 months in 2008, ending the year down nearly 40%. From the market’s peak in October of 2007 to the bottom in February 2009, the S&P 500 declined nearly 53%. Suppose a retiree had $500,000 invested in an S&P 500 index fund, from which he needs to withdraw nearly 10%, or $4,000 a month for living expenses. Following a buy-and-hold investment approach, his account would be depleted within 10 years.

If, through an actively managed approach, the retiree’s account was moved to the protection of a money market account after 2007’s November and December losses and through the start of the market’s recovery in March of 2009, the balance of the account would increase by more than $100,000—despite withdrawing $348,000 by the end of 2014.

The actions of the Federal Reserve (ZIRP policy and the “Fed put”) have encouraged many investors to believe that volatility and downside risk can be removed from the market through the manipulation of interest rates, eliminating normal cyclical fluctuations.

The problem with this approach is reflected in the theories of economist Hyman Minsky: “When times are good, investors take on risk; the longer times stay good, the more risk they take on, until they’ve taken on too much. The consequence of artificially prolonging the good times and distorting normal market action can be far more violent market behavior over the completion of the cycle than investors would have faced otherwise.”

When investors are young, they can overcome market losses by investing new monies and taking advantage of the market’s long-term tendency to recover from losses. With time horizons of 20, 30, or even 50 years before funds need to be withdrawn, younger investors have time to recover. For retirees, the only way to build the margin of safety needed to recover from bear-market damages in a buy-and-hold portfolio is to dramatically reduce withdrawal rates. Active management may allow retired investors to participate in much of the earnings power of the equity markets—along with higher withdrawal rates—while better managing risk.

THE MATHEMATICS OF REGAINING MARKET LOSSES 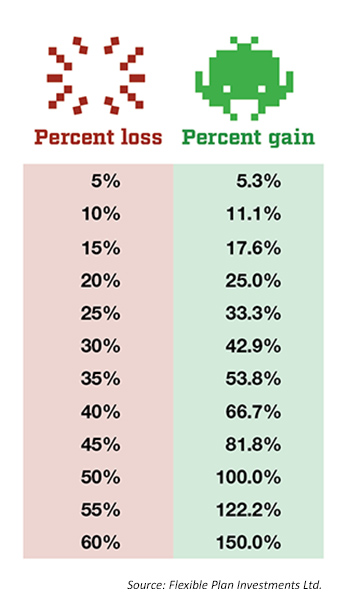 As losses increase, the percentage gains needed to attain break even accelerate at a faster rate.

Older investors need the stock market’s earning potential to keep ahead of taxes and inflation and to stretch the value of their savings as far as possible. Unfortunately, those over the age of 50 who are still working (and those who have already entered retirement), are facing several real and behavioral challenges in today’s environment:

Stocks tend to generate higher returns than other financial assets by a wide margin over the long term. That performance is certainly not guaranteed, but it has been pretty persistent over the last 100 years. The catch for older investors and retirees is to make certain their investments do not suffer a potentially devastating hit, particularly during the first few years when they are making withdrawals, and ideally throughout the life of the account. Maintain decent returns and modest drawdowns, and retirement looks a lot better. Advisors utilizing an active-management investment approach should have a lot to offer their clients in this 50+ age segment.