Last Friday’s (May 7) employment release from the Bureau of Labor Statistics (BLS) undershot projections in one of the largest “misses” in the history of the data series.

Most estimates had job increases coming in at 1 million, with low-side estimates around 750,000. Actual reported job creation, on a seasonally adjusted basis, was about 25% of projections. The March numbers were also revised to the downside, falling from 916,000 jobs added to a revised figure of 770,000.

The BLS report said, in part,

“Total nonfarm payroll employment rose by 266,000 in April, and the unemployment rate was little changed at 6.1 percent, the U.S. Bureau of Labor Statistics reported today. Notable job gains in leisure and hospitality, other services, and local government education were partially offset by employment declines in temporary help services and in couriers and messengers. …

“Both the unemployment rate, at 6.1 percent, and the number of unemployed persons, at 9.8 million, were little changed in April. These measures are down considerably from their recent highs in April 2020 but remain well above their levels prior to the coronavirus (COVID-19) pandemic (3.5 percent and 5.7 million, respectively, in February 2020).”

The unemployment rate rose to 6.1% in April versus projections for 5.8%, which some analysts attributed to a shortage of qualified or willing job candidates and a slight increase in the labor participation rate (to 61.7% from 61.5% in March). Other analysts also cited ongoing COVID health-related concerns and the difficulty for many potential workers to deal with child-care issues for school-age children. 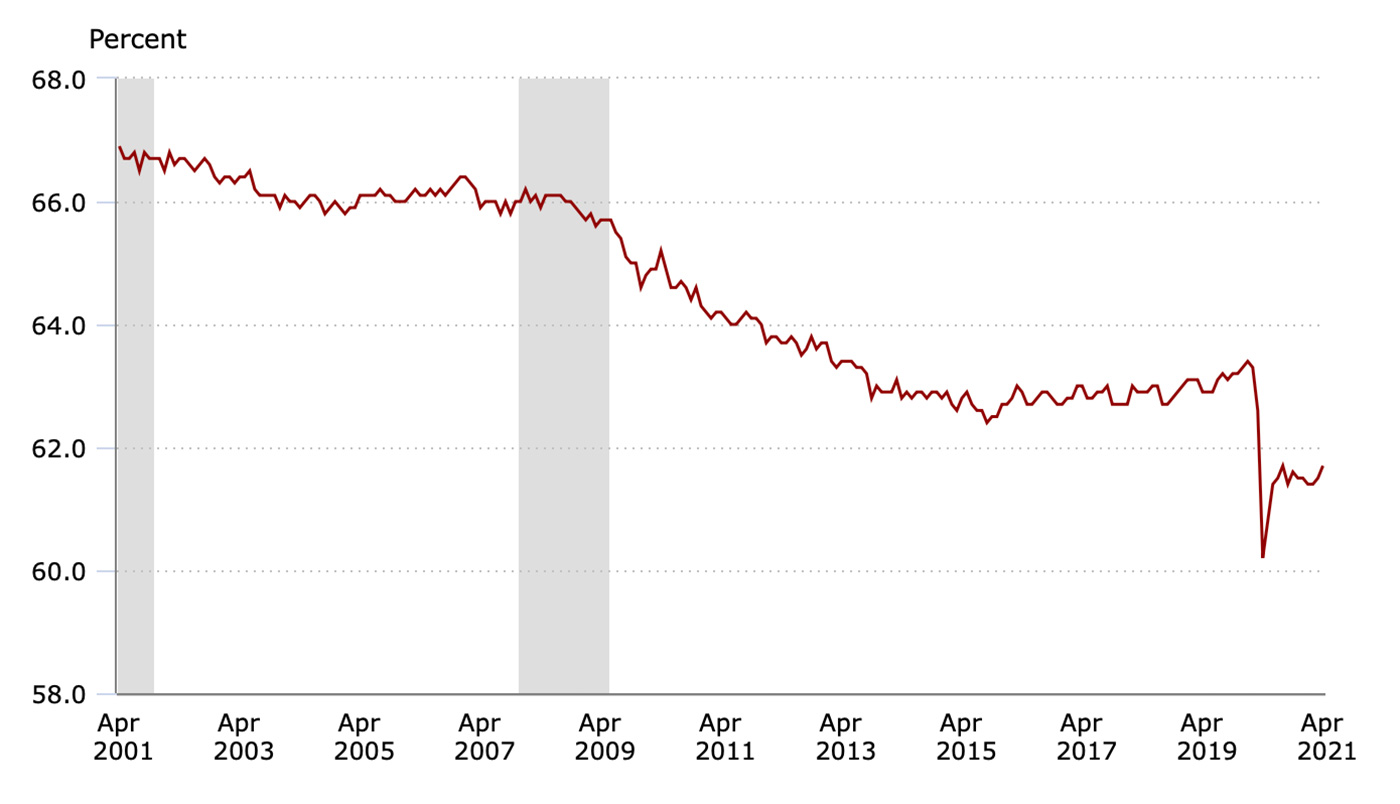 Statistics from Bespoke Investment Group indicated that some of the jobs gains in leisure and hospitality and some other lower-paid sectors might be attributed to employers actively seeking to add workers through wage increases:

“Wages at the low end are surging, with rank-and-file Leisure & Hospitality wages rising at the fastest pace on record over the last three months versus the three prior; average wages are above $15/hour and were up 37.4% annualized in April even as the category surged.” 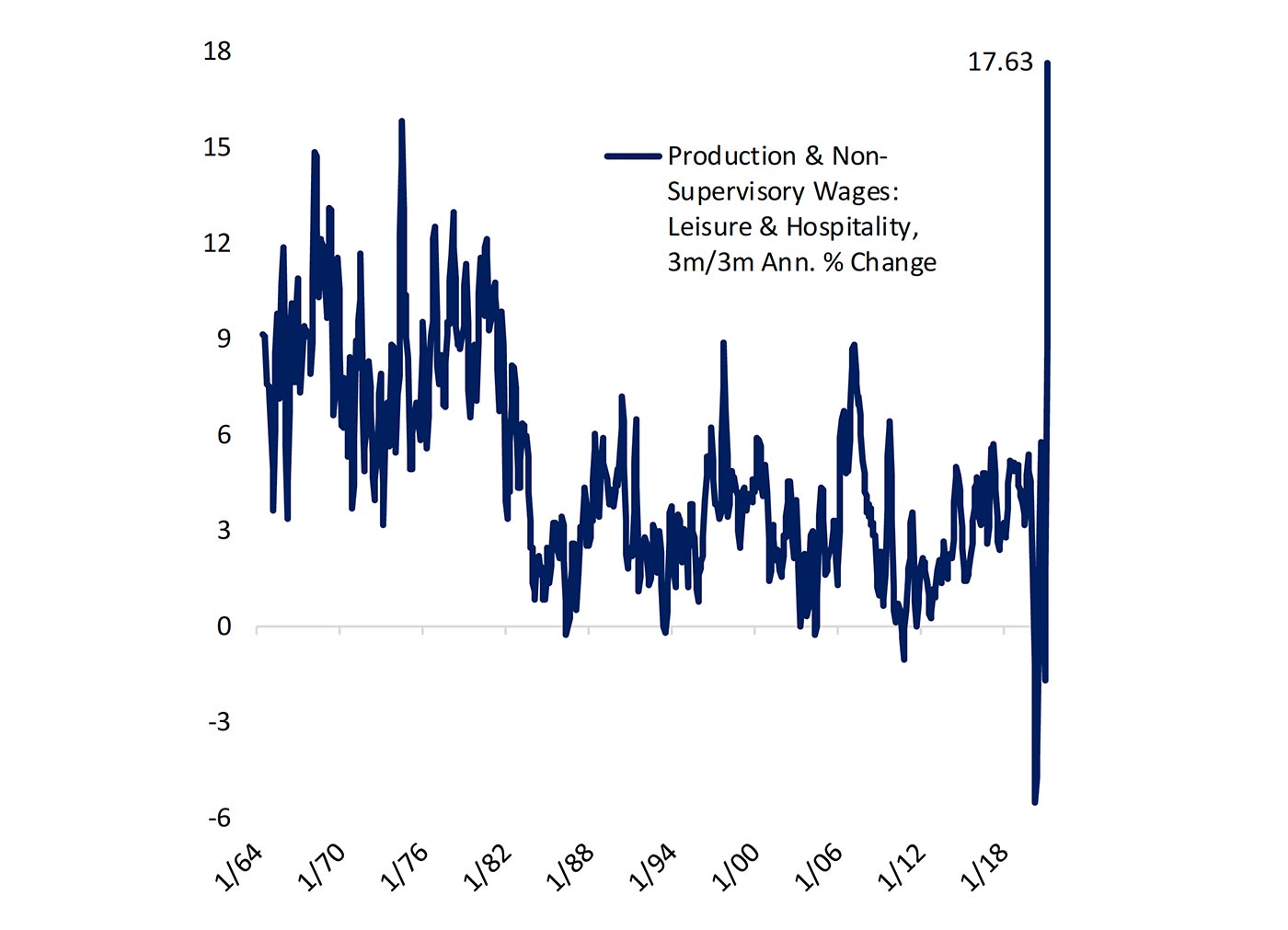 At least for one trading day, U.S. equity markets more than took the jobs numbers in stride.

“U.S. stocks jumped to record levels on Friday even after a disappointing April jobs report as the weak number made investors believe easy monetary policies that powered the market’s historic rebound will stay in place for longer. Some investors also dismissed the report as a one-time blip that doesn’t signal any slowdown in the economic recovery.

According to CNBC, JJ Kinahan, chief market strategist at TD Ameritrade, said, “It certainly takes the pressure off the Fed and takes an imminent rate increase off the table. We’re not going to see inflation in wages, and we don’t have as many people employed as we thought, so we have to keep the party going.”

The report intensified the political argument over recent stimulus checks and the extension of supplemental unemployment benefits. The Biden administration essentially called the report proof of the need for such benefits in a lengthy economic recovery, while some prominent Republicans cited the belief that enhanced unemployment checks continued to provide a disincentive for pre-pandemic employed workers to look for work.

Some observers questioned the accuracy of the jobs data, citing the generalized effects of the pandemic on data collection, the unreliability of “outdated” seasonal adjustment factors, and the difficulty of fully accounting for “gig economy” workers on a month-to-month basis.

“Evans blamed the poor reading on sectors ‘experiencing growing pains’ and also trouble with job-matching and lack of child care.

“‘I’m looking for continued strong employment growth over the rest of the year,’ Evans told the business news network.

“‘Hopefully, [the April report] is just a one-month-kind-of-thing and we’re going to get to better employment. I certainly think so because we’ve got a lot of support,’ he said referring to fiscal stimulus and accommodative monetary policies in place.”

“The Fed has been buying $120 billion a month of assets, along with keeping interest rates close to 0%, to support the economy.

“The Fed has said it wants to see ‘substantial further progress’ before scaling back asset purchases.

“‘I think we’re going to have to see more strong employment numbers and we’ll have to see inflation [rise],’ Evans said.”

Minneapolis Fed President Neel Kashkari provided more emphatic comments in an interview with Bloomberg, “For all those people who have been saying ‘oh my gosh, the Fed needs to normalize quantitative easing,’ today’s job report is just an example of—we have a long way to go.”

How financial therapy could benefit your clients—and your practice

As wealth management becomes increasingly holistic, more advisors are either enlisting the help of a certified financial therapist or enhancing their own communication and empathetic skills—or both.What do you do when clients agree to a financial plan and timetable...

Have the Roaring ’20s returned?

While recent economic news is encouraging, no one has a crystal ball as to the market’s future performance. There is no better time to make sure clients’ risk-management plans are in place.In a recent Proactive Advisor Magazine article, the author (a successful...

The inflation songbook: Play it again

Article highlights Inflation is not a one-off change in the price level caused by a short-term distortion to protect profit margins but is a persistent acceleration in prices. Pundits who are talking incessantly about the “Roaring Twenties” never tell anyone that for...