Q3 GDP is solid, but no ‘October Surprise’

The Bureau of Economic Analysis (BEA) released the first look at third-quarter GDP in the U.S. last Friday, with the annualized rate of growth coming in at 3.5%. In the second quarter of 2018, real GDP increased 4.2%.

“The increase in real GDP in the third quarter reflected positive contributions from personal consumption expenditures (PCE), private inventory investment, state and local government spending, federal government spending, and nonresidential fixed investment that were partly offset by negative contributions from exports and residential fixed investment. Imports, which are a subtraction in the calculation of GDP, increased.

The report was just above consensus estimates of 3.3% but within the range of estimates from 2.6% to 3.8%.

The Trump administration was undoubtedly hoping privately for another 4%-plus reading in the run-up to the November election. An economic “October Surprise” would have been most welcome as a Republican talking point, especially given the recent equity market volatility.

However, the GDP release was still very good news in that the actual reading kept the economy on track for the administration’s goal of full-year growth of 3% or better. Sinclair Broadcast Group observed that the economy has achieved its strongest back-to-back quarters of GDP growth in four years.

“It’s exactly what we told people we were shooting for, that sustained 3 percent growth. … The fundamentals are all there for this being a sustainable type of growth,” Office of Management and Budget Director Mick Mulvaney told CNBC Friday morning (10/26).

There were two notable elements of the BEA’s GDP release, one positive and one of some concern to analysts.

On the negative side, Barron’s said, “Business investment wasn’t the major star as it has been in prior quarters but still was in the plus column at 0.8 percent growth. Yet the slowing, following growth rates of 8.7 and 11.5 percent in the second and first quarters, may hint at a quick fade for the stimulative effects of this year’s corporate tax cut. Residential investment extended its dismal run, falling at a 4.0 percent rate for the fifth contraction of the last six quarters, which underscores housing as a problem sector.”

The Associated Press also reported on how slowing business investment might be a growing concern:

“Analysts said the slowdown could be an indication that last December’s tax cuts, which offered special breaks for business investment, were beginning to wane. There was also concern that the slowdown could reflect adverse impacts from rising trade tariffs with businesses less reluctant to invest under the threat of a trade war between the United States and China. Gregory Daco, chief U.S. economist for Oxford Economics, said he expects more modest GDP growth in coming quarters, citing the fading impact of the tax cuts, higher interest rates from the Federal Reserve and increasing trade tensions.” 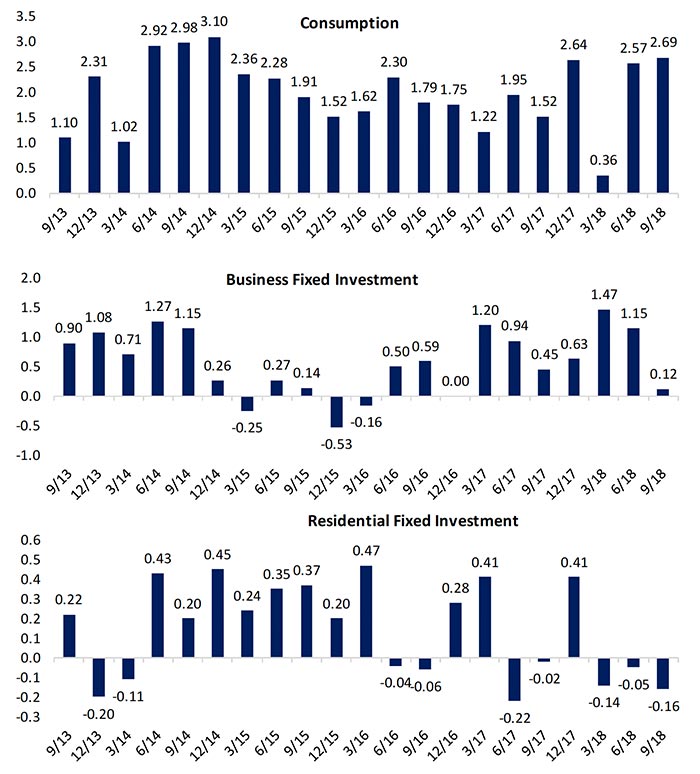 Another major factor influencing the Q3 GDP first look was how rising imports (due in part to the “trade wars”) had both a negative and positive effect on the growth number. Said Reuters,

“The rebound in imports also reflected a rush by businesses to stockpile before U.S. import duties, mostly on Chinese goods, came into effect late in the third quarter. Imports subtract from GDP growth. But some of the imports likely ended up in warehouses, adding to the stockpile of inventory, which contributed to GDP. … Excluding the effects of trade and inventories, GDP grew at a 3.1 percent rate in the third quarter compared to a 4.0 percent pace in April-June.”

On Monday (10/29), the BEA also released its report on September Personal Income and Outlays, which disappointed. Barron’s reported,

“Income growth proved very slight in September with inflation steady and moderate and right on the Federal Reserve’s target. Personal income inched only 0.2 percent higher in September which misses the low end of Econoday’s consensus range. Wages & salaries are September’s weak link, managing only a 0.2 percent gain. When stripping out taxes and looking at inflation-adjusted data, disposable income gained only 0.1 percent in September.”

The question moving forward becomes, will GDP growth be able to sustain its current pace of more than 3% over the coming quarters? Bespoke Investment Group wrote last Friday, “Consumers added the most to GDP growth since Q4 2014, a pace that looks unsustainable. If consumers can’t keep up the pace of spending, investment looks unsuited to taking the burden.”

The Federal Reserve, says The Wall Street Journal, is projecting growth rates of 2.5%, 2.0%, and 1.8% over the next three years.

Gold’s role in portfolios should not just be reactive

While many view gold as an opportunistic “trade,” investors concerned about capital preservation and optimized returns should consider gold as a key portfolio element.old has been generating news and...