The Bureau of Economic Analysis (BEA) said in its Sept. 29 press release,

First Trust’s economic team observed that the overall health of the economy is still not firmly signaling recession, though the outlook for 2023–2024 is not as optimistic:

“Corporate profits rose 4.6% versus Q1, are up 7.7% from a year ago, and up 23.3% versus the pre-COVID level. Profits in Q2 rose at domestic non-financial companies as well as from operations abroad, but declined at domestic financial corporations. …

“Although some investors think a recession has already started, given two straight quarters of negative real GDP growth, we don’t think that’s right. Real Gross Domestic Income (real GDI), an alternative measure of GDP that is just as accurate, remained positive for the first two quarters, growing at a revised 0.1% annual rate in Q2 after growing at a revised 0.8% rate in Q1. In addition, so far this year the unemployment rate has dropped, payrolls have expanded 438,000 per month and industrial production is up at a 4.0% annual rate through August. These are just not numbers we’d get in a recession. …

“Our capitalized profits model suggests US equities are roughly fairly to slightly overvalued today at current interest rates, although we believe equities will remain range bound until we eventually hit a recession starting sometime in 2023-24.”

See Related Article: How much attention should you really pay to the news?

U.S. consumers are spending, despite inflation

“Consumer spending, by far the largest component of the gross domestic product, once again proved to be surprisingly resilient in the face of surging inflation. According to the BEA, inflation-adjusted personal consumption expenditures increased at an annual rate of 2 percent in the second quarter, partly offsetting a 14 percent decline in gross private domestic investment. Measured in chained 2012 dollars, real personal consumption expenditures amounted to $14.1 trillion on an annualized basis in Q2 2022, up from $13.8 trillion a year earlier.

“While consumers kept spending despite rising prices through the second quarter, there are some warning signs as spending on goods, led by food and beverages, declined for the second consecutive quarter. Meanwhile services spending increased at an annual rate of 4.6 percent in Q2, as Americans spent more on food services and accommodation compared to the preceding quarter.” 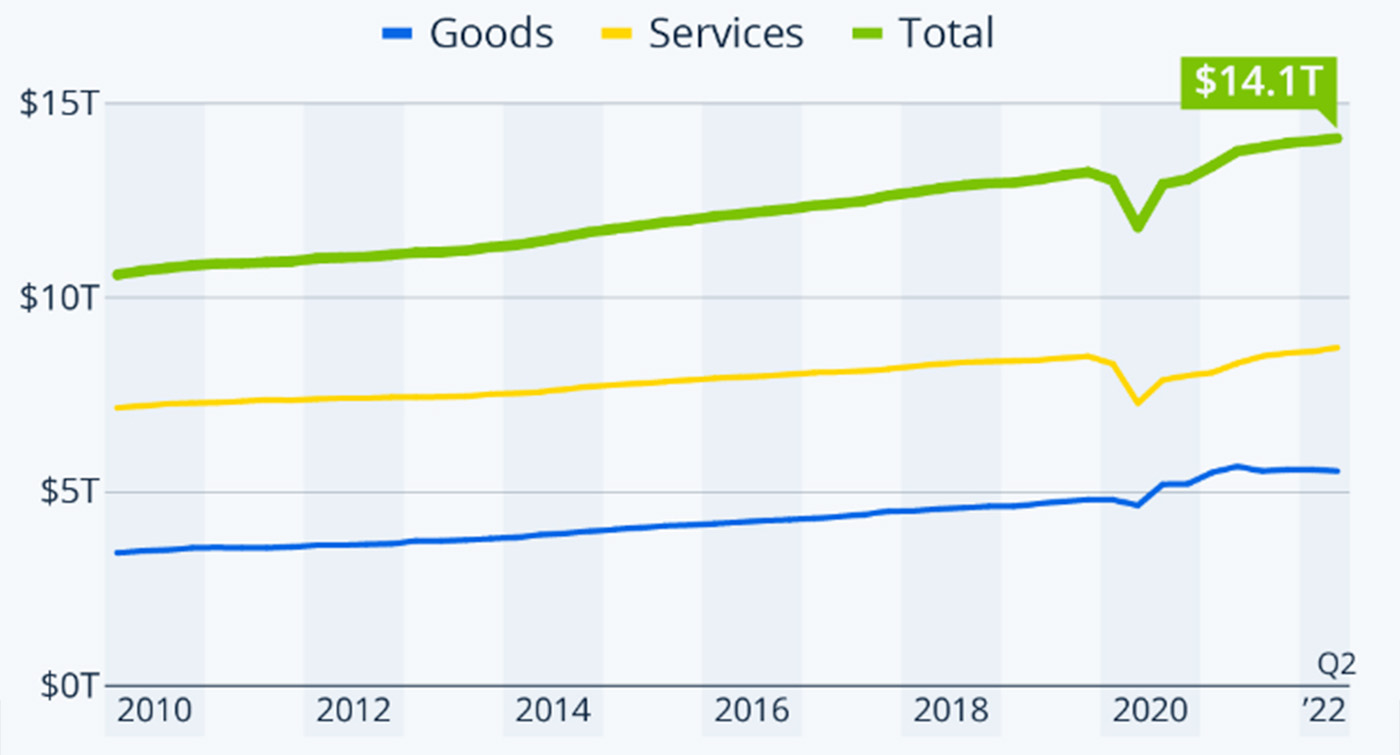 The Conference Board is less optimistic about the intermediate-term economic outlook, according to its Sept. 22 press release, which stated, “The US LEI [Leading Economic Index] continued to decline signaling a contraction in economic activity may be imminent.”

The Conference Board’s LEI reading “decreased by 0.3 percent in August 2022 to 116.2, after declining by 0.5 percent in July. The LEI fell 2.7 percent over the six-month period between February and August 2022, a reversal from its 1.7 percent growth over the previous six months.” The release adds,

“‘The US LEI declined for a sixth consecutive month potentially signaling a recession,’ Ataman Ozyildirim, Senior Director, Economics, at The Conference Board. ‘Among the index’s components, only initial unemployment claims and the yield spread contributed positively over the last six months—and the contribution of the yield spread has narrowed recently.’

“‘Furthermore, labor market strength is expected to continue moderating in the months ahead. Indeed, the average workweek in manufacturing contracted in four of the last six months—a notable sign, as firms reduce hours before reducing their workforce. Economic activity will continue slowing more broadly throughout the US economy and is likely to contract. A major driver of this slowdown has been the Federal Reserve’s rapid tightening of monetary policy to counter inflationary pressures. The Conference Board projects a recession in the coming quarters.’”

Source: The Conference Board