Although the U.S. equities market broke out of a long-term trading range and made new all-time highs over the past two weeks, various economic and sentiment indicators are presenting a far more mixed picture on future expectations for the U.S. economy.

“Technicals are now the most bullish thing the U.S. equity market has going for it. … You can see the clear breakout the index has experienced during this recent run to new highs. A breakout like this sets the stage for a new higher range and longer-term leg higher that investors have been looking for over the past 18-24 months.”
FIGURE 1: S&P 500 TREND (LAST 3 YEARS) 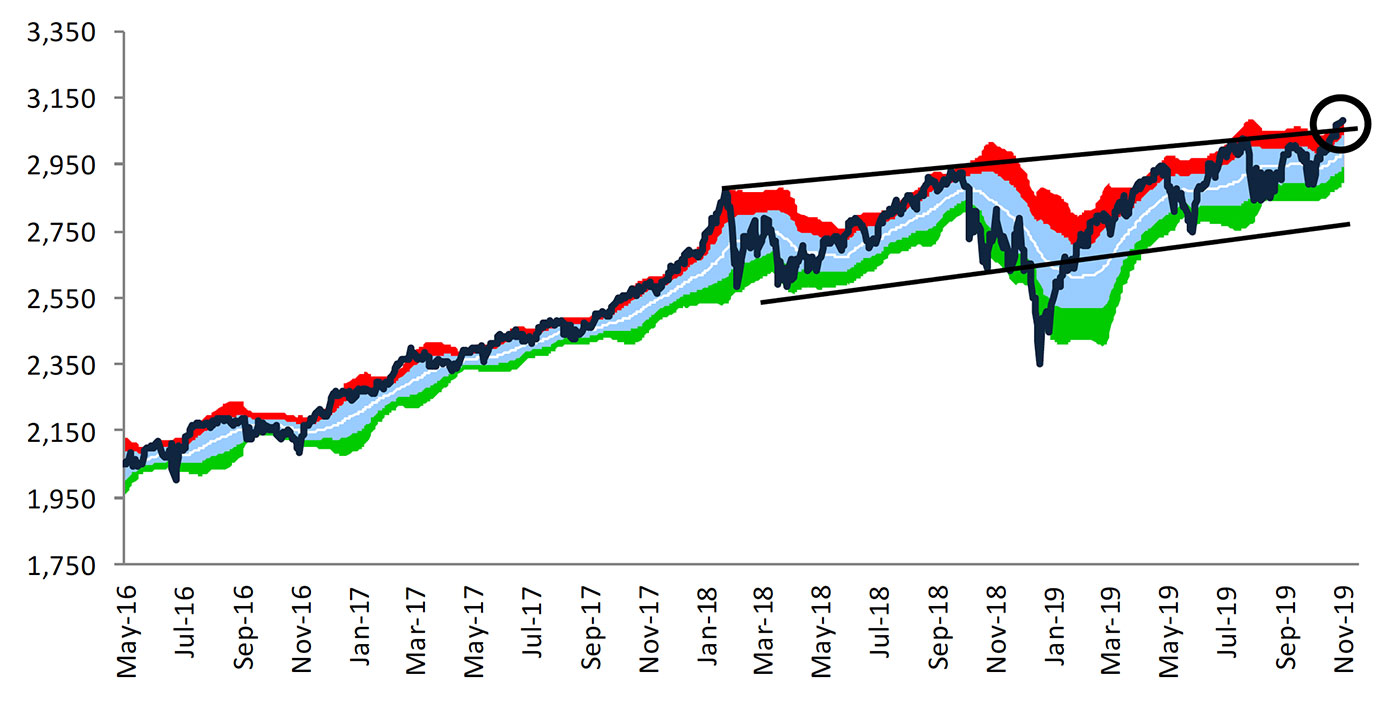 While the market has been shaking off the continued uncertainty around the trade dispute with China, ongoing Washington drama, some indications of slowing global growth, and the unresolved situation regarding Brexit, the Federal Reserve has communicated a more dovish stance on interest rates in the last few months.

A specific statement by Fed Chair Powell last week went a long way to reassuring markets that a reversion to rate hikes was not on the immediate horizon, “We would need to see a really significant move up in inflation that’s persistent before we would consider raising rates to address inflation concerns.”

Additionally, while full-year corporate earnings are projected to grow by just 1.5% in 2019, the outlook for 2020 is far more positive: in the 10% EPS growth range.

How have various economic, sentiment, and other measures reacted in the context of a stock market environment that is expressing optimism?

The Citi Economic Surprise Index measures the pace at which economic indicators are coming in ahead of or below consensus forecasts. Data on this measure was trending very positively in September and October 2019 but has fallen off recently. Last week alone saw 15 of 20 economic reports missing expectations or coming in worse than the prior period, says Bespoke. 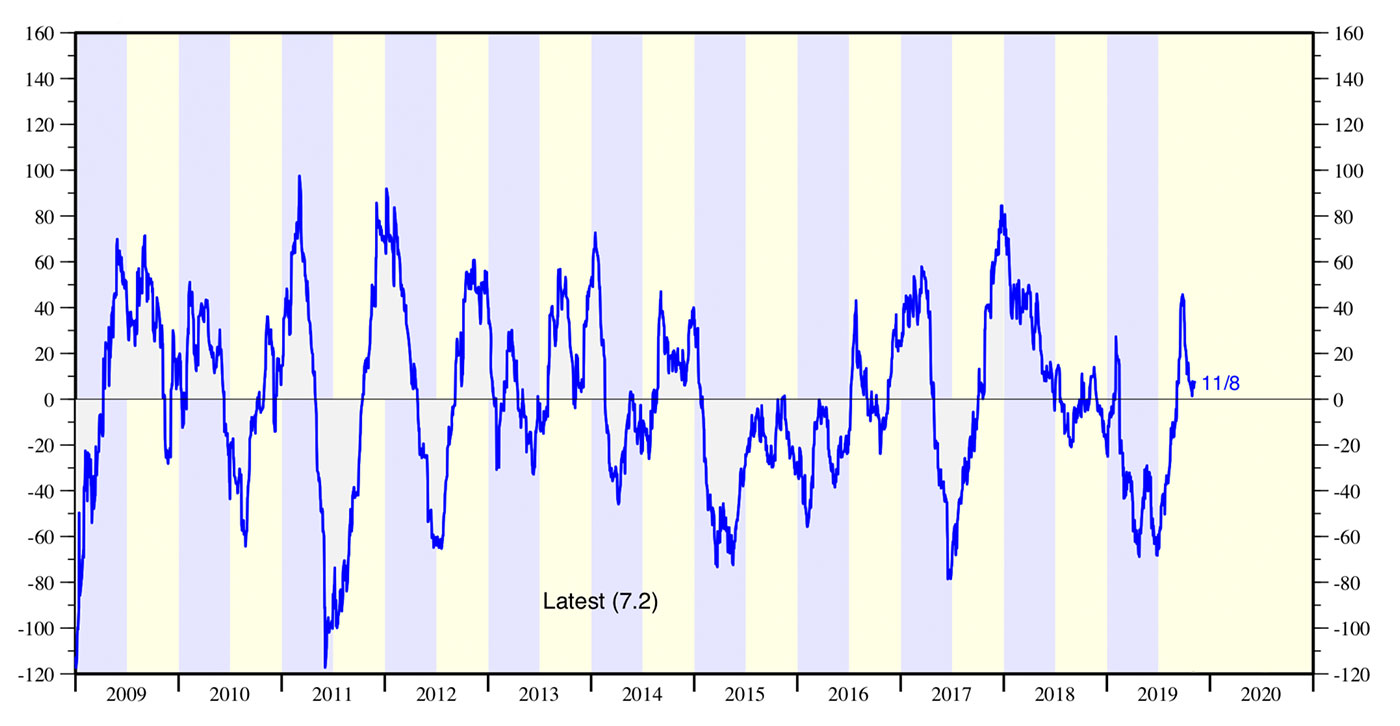 Manufacturing data last week started off slowly with factory, durable goods, and capital goods declining from the previous month. IHS Markit’s Service PMI fell to 50.6 compared to expectations of the index holding at 51. On the positive side, the ISM Non-Manufacturing Index reading rose more than expected, says Bespoke, coming in at 54.7 versus expectations of 53.5—and above the prior period’s reading of 52.6.
FIGURE 3: ISM NON-MANUFACTURING (1997–2019)

Retail investors are increasingly becoming more bullish as the equity markets have moved higher. The American Association of Individual Investors’ (AAII) latest survey results on Nov. 7 shows that bullish readings reached 40%, coming off a low of 21% in early October.

The University of Michigan’s early November reading on consumer sentiment was nearly identical to last month’s and the average 2019 level (95.6).

“Consumers did voice a slightly more positive outlook for the economy, which was offset by a slightly less favorable outlook for their own personal finances. Spontaneous negative references to tariffs were still mentioned by one-in-four consumers in early November. References to the impact of impeachment on economic prospects were virtually non-existent, mentioned by less than 2% in October and November. The lack of impact on economic prospects is broadly similar to Clinton’s but not Nixon’s impeachment inquiry. …

“The strongest aspect of the current economy has been job and wage gains. Although consumers have become somewhat more cautious spenders, they see no reason to engage in the type of retrenchment that causes recessions. While most consumers do not anticipate year-to-year increases in the unemployment rate, the majority of consumers expect the unemployment rate to remain largely unchanged at its lowest level in 50 years.”

In contrast, the Bloomberg Consumer Comfort Index continues to slide. Bloomberg reported that the reading for the week ending October 27 fell by the most since March 2011, 2.4 points to 61. The downward trend continued last week with the index falling to 59.1. This index tracks Americans’ views on the condition of the U.S. economy, their personal finances, and the buying climate.

While The Conference Board continues to report that consumer confidence remains at healthy levels, its October Measure of CEO Confidence “declined to its lowest level in a decade,” said Lynn Franco, senior director of economic indicators at The Conference Board. She added, “Tariffs and trade issues, coupled with expectations of moderating global growth, are causing a heightened degree of uncertainty. As a result, more CEOs than last year say they have curtailed investment. In a separate poll of CEOs and CFOs (conducted in September), we found that a large majority believe the recent trade disputes will have a lasting impact on their business.”

MarketWatch reports that two surveys of global businesses have slumped “to the gloomiest level since the recession.” The IHS Markit global business outlook and the Ifo world economic outlook have both recently found that respondents see a slower global economy on the horizon.