Choosing between exchange-traded funds (ETFs) and mutual funds doesn’t need to be an either-or proposition—both can offer exposure to a diversified basket of securities and have a proper place in a well-constructed portfolio.

It started with a little spider. Not a tiny arachnid, but the first exchange-traded fund, or ETF. Created in 1993 by State Street Global Advisors (SSGA), the Standard & Poor’s Depositary Receipt—its acronym, SPDR, earned it the nickname “spider”—is now the oldest and largest ETF (ticker: SPY) on the market, with more than $238 billion in assets.

As it turned out, that spider had legs. Twenty years ago, using ETFs as portfolio building blocks for individual investors was a novel—even peculiar—idea. London-based industry watcher ETFGI now says the global ETF/ETP (exchange-traded product) industry has 6,978 ETFs/ETPs from 329 providers listed on 69 exchanges in 56 countries.

ETFGI reports that record net new assets were invested in ETFs/ETPs listed globally in the first seven months of 2017, surpassing the record net new assets gathered in all of 2016. According to their July 2017 industry insights report, they say that assets invested in ETFs/ETPs have increased 20.6% year-to-date, growing from US$3.5 trillion to a record US$4.3 trillion.

ETFs have become the biggest investment success story of the past quarter century, fundamentally changing the wealth-management industry. 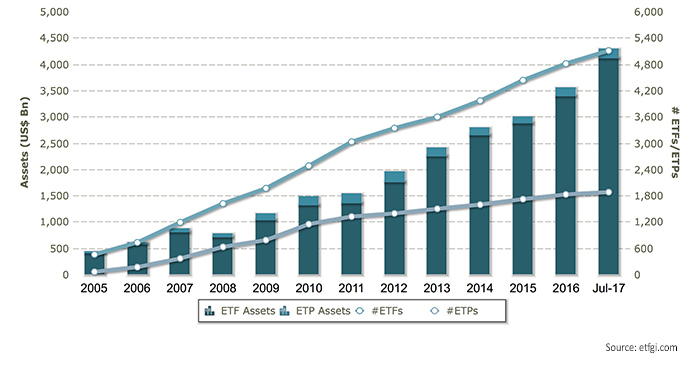 A mutual fund with a powerful twist

An ETF is like a mutual fund—with a powerful twist. An ETF is a marketable security that tracks an index, a commodity, bonds, or a basket of assets like an index fund. The twist—what differentiates an ETF from a mutual fund—is that an ETF trades like a common stock on a stock exchange. As such, an ETF can be bought and sold like stock throughout the trading day. And like a stock, an ETF has a ticker symbol and intraday price data, which is frequently updated and readily available online.

Indeed, all of the core benefits of ETFs—low costs, transparency, tax efficiency, and access to every corner of the market—come from the fact that they trade on an exchange.

The nuts and bolts of ETFs

The key to understanding how ETFs work is the “creation/redemption” mechanism, a process by which ETFs gain exposure to the market. This mechanism is also the reason why ETFs are less expensive, more transparent, and more tax-efficient than a typical mutual fund.

Here’s an example of this process in action: Let’s say ETF provider SSGA wants to create shares of a fund, either to launch a new product or meet growing market demand for an existing one. To do this, SSGA calls on specialized investors known as authorized participants (APs). APs are typically market makers with a high degree of buying power, such as large banks or investment companies. Because they are authorized by ETF providers such as SSGA to create and redeem ETF shares, APs play a critical role in ETF liquidity and in keeping ETFs priced at fair value.

Every day, ETF providers publish lists of the securities they want to own, as well as the exact percentages of each, in order to continue to mirror the indexes they track. Picking up on our example, SSGA, which manages the SPDR S&P 500 ETF, discloses the fund needs $10.5 million worth of shares to remain aligned with the S&P 500. An AP (or APs, as most large ETFs have more than one) purchases the desired securities on the open market, puts them into what’s called a creation basket and then delivers those shares to SSGA. In return, the AP receives an equal value of shares in SPY from SSGA. The process is reversed for redemptions.

The ETF creation/redemption mechanism is a win-win for both parties. SSGA acquires all of the securities it wants to hold in SPY to track the S&P 500 Index, and the AP obtains shares it can sell into the market. And since both SPY and its basket of underlying assets are tradable throughout the day, APs can take advantage of momentary arbitrage opportunities, locking in profits while keeping SPY’s price close to its fair value.

Evaluating the use of ETFS for client portfolios

Before building a portfolio that includes ETFs, you should establish the investor’s investment objective, time horizon, risk tolerance, and liquidity needs. Armed with that information, you can determine an asset-allocation strategy and begin the construction phase.

Because today’s ETF toolbox is much larger than it was a decade ago—and in many cases, more complex—you must carefully assess each ETF as you would any other investment vehicle. First, look at what securities comprise an ETF’s underlying index. Owing to their transparency, ETFs make it easy for advisors and investors alike to know the holdings, sector, and country breakdowns throughout the trading day.

But don’t focus solely on an ETF’s composition. Pay attention to how the securities in the ETF are weighted. Don’t assume that all China ETFs, for example, are the same. They aren’t.

After zeroing in on an index that matches your client’s recommended asset allocation, you’ll want to assess whether the ETF tracking it is reasonably priced, well-run, and tradable. When evaluating price, avoid using a fund’s expense ratio as the lone deciding factor: the lower cost isn’t always better. Also, gauge a fund’s tracking difference—or how closely its performance matches that of its benchmark—and choose an ETF that mirrors its index to make certain your client is getting the desired exposure.

Finally, consider liquidity. An ETF that invests in S&P 500 stocks, for example, will probably be more liquid than one that invests in South African small caps. This no doubt explains why large, established ETFs have garnered the lion’s share of assets. Indeed, four out of every five dollars are invested in broad-market, capitalization-weighted funds offered by companies such as Vanguard, BlackRock, and State Street.

Choosing between ETFs and mutual funds doesn’t need to be an either-or proposition. While ETFs and mutual funds are different, both can offer exposure to a diversified basket of securities and have a proper place in a well-constructed portfolio. Whether an ETF or mutual fund, it’s critical to determine how the investment vehicle in question aligns with your client’s goals and fits into his or her portfolio. A good strategy may be to include mutual funds in qualified accounts and ETFs in the nonqualified portion of a client’s portfolio.

Lindsay Faussone is vice president of business development at Trust Company of America (TCA), which provides technology, custody, and practice management support for registered investment advisors. Ms. Faussone joined TCA in 2014 with 15 years of experience in the financial-services industry. Her background includes a variety of strategic and business development roles. Ms. Faussone’s current areas of focus include helping TCA and its clients succeed with growing, diversified, and thriving businesses. She is a graduate of Colorado State University, where she earned degrees in marketing and computer information systems.