Talk of recession, stock market volatility, and the ongoing news flow regarding the trade conflict with China continue to weigh on consumer confidence.

Research and data provider Statista reported last week that consumer confidence, as reported by the University of Michigan, took “its biggest monthly dip since December 2012, dropping 8.6 points from July’s numbers.” The report added,

“Receding consumer confidence is reflective of consumer anxiety around U.S.-China trade tensions. Back in 2012, consumer sentiment shrank due to concerns around rising taxes and falling government spending. Richard Curtin, an economist and the Director of Surveys at the University of Michigan, said that: ‘The August data indicate that the erosion of consumer confidence due to tariff policies is now well under way.’”

“Of the people sourced, one in three brought up negative references to tariffs unprompted by interviewers. Those people were more likely to expect rising unemployment, smaller gains in household income, and higher inflation within the next year.” 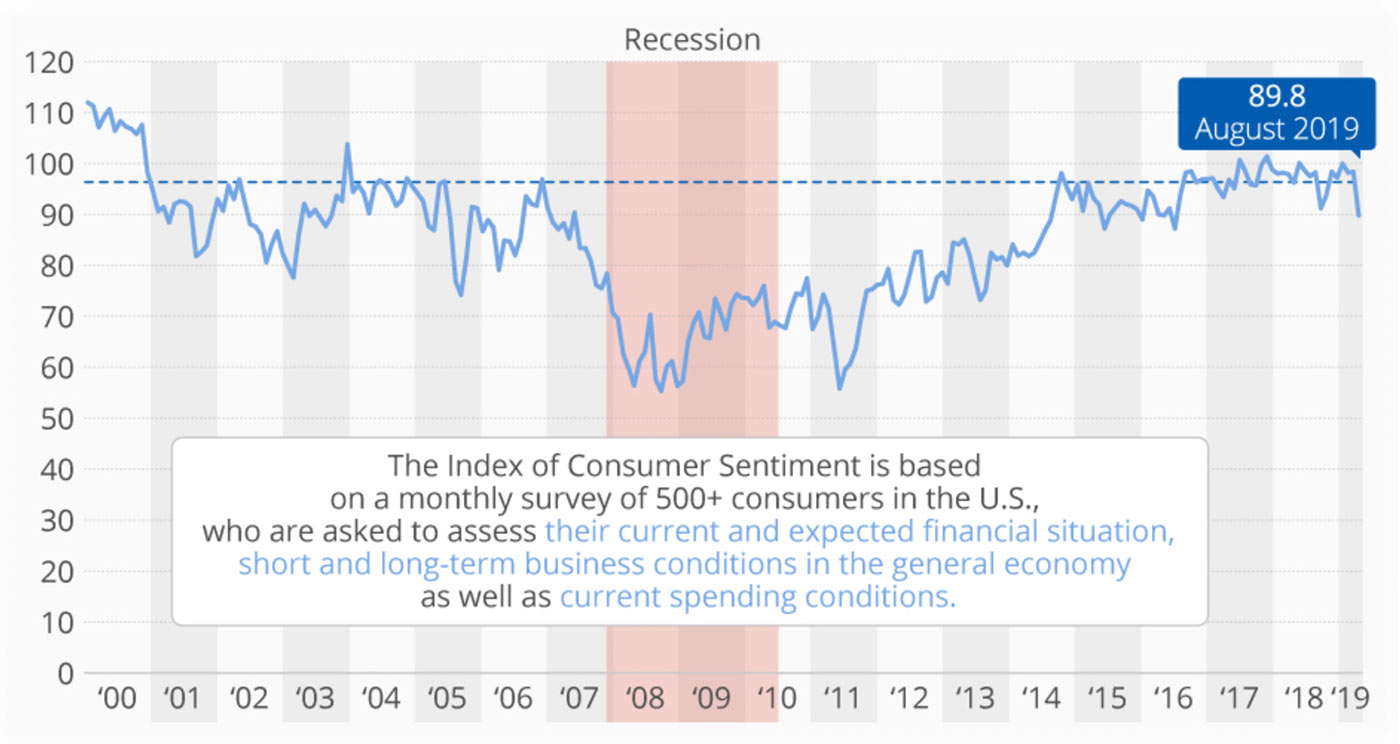 Source: Statista, based on data from the University of Michigan Surveys of Consumers

Mr. Curtin’s comments in the press release for the most recent University of Michigan data added further texture to the tariff theme:

“Unlike concerns about the fiscal cliff, which were promptly resolved, Trump’s tariff policies have been subject to repeated reversals amid threats of higher future tariffs.

“Such tactics may have some merit in negotiations with China but act to increase uncertainty and diminish consumer spending at home. Unlike the repeated tariff reversals, negative trends in consumer sentiment cannot be easily reversed.

“While the overall level of sentiment is still consistent with modest gains in consumption during the year ahead, the data nonetheless increased the likelihood that consumers could be pushed off the tariff cliff in the months ahead. This could result in a much slower growth in consumption and the overall economy.”

However, consumer confidence remains in a relatively strong place compared to levels seen in 2008–2014. Statista notes, “After a brief worsening of consumer sentiment due to the shutdown in January, confidence was promptly restored, bolstered by rising incomes, low inflation, plentiful jobs, and low unemployment.”

“The Labor Department said the U.S. economy added 130,000 jobs in August, below the 173,000 expected by economists polled by MarketWatch and down from the 159,000 jobs added in July. The unemployment rate remained steady at 3.7%, while average hourly earnings rose 0.4% month-over-month and 3.2% year-over-year.”
FIGURE 2: GROWTH RATE FOR AVERAGE HOURLY PAY 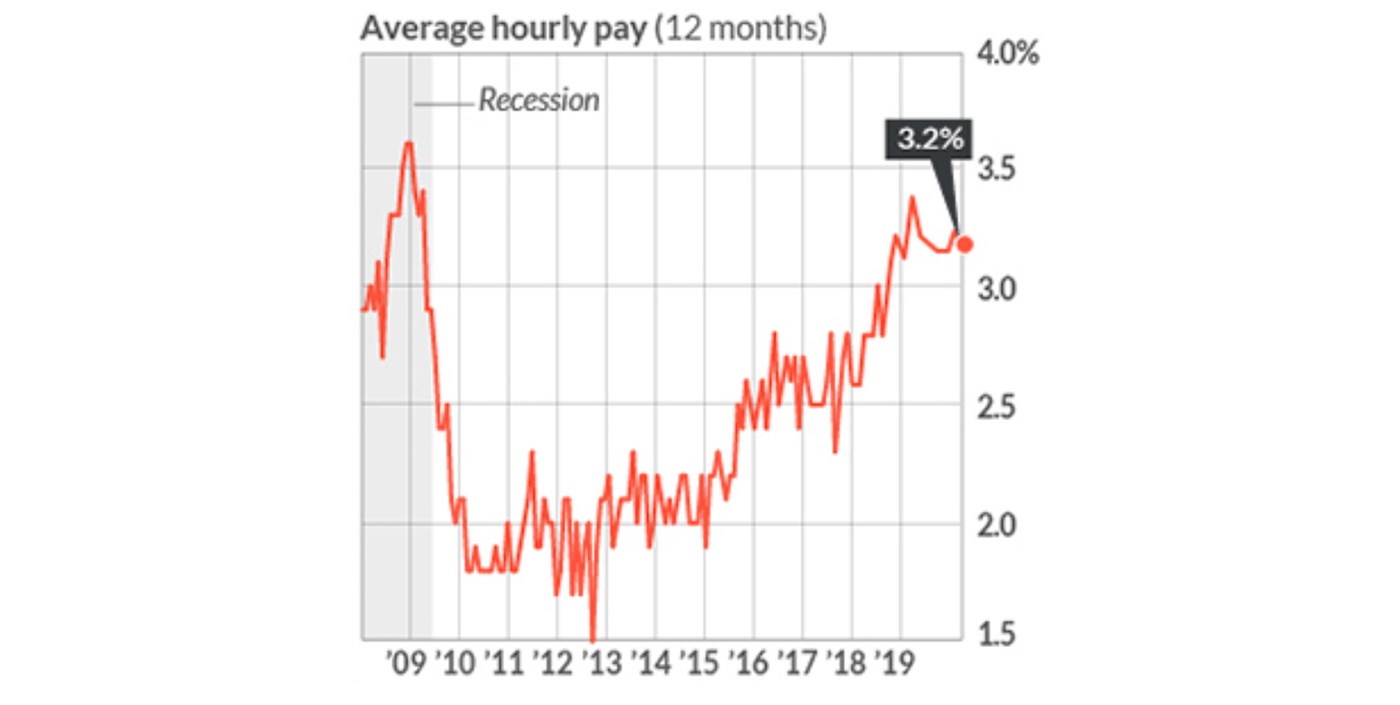 Further, MarketWatch added that the household survey component of the Bureau of Labor Statistics reporting found that “some 571,000 people entered the labor force in August and nearly 590,000 found work—the biggest advance in 18 months.”

Bespoke Investment Group noted that while last week’s reading on initial jobless claims “disappointed slightly … the labor market is still holding up just fine. The moving average is still at healthy levels relative to history even though the pace of improvements has slowed.”

That said, analysts believe that the recent payrolls report, combined with some weaker manufacturing and other data points, reinforces the case for the Federal Reserve to cuts rates on Sept. 18.

In a recent panel discussion in Switzerland, Federal Reserve Chairman Jerome Powell seemed to indicate that this would be the case. While he said the Fed is not expecting a recession and that the U.S. economy and its consumers are in good shape, “The Fed has through the course of the year seen fit to lower the expected path of interest rates. That has supported the economy.”

Mr. Powell also cited three key risk factors that the Fed continues to monitor: “slowing global growth, uncertainty around trade policy, and persistently low inflation.” As some economists have noted, while the fundamentals of the U.S. economy do not necessarily merit lower interest rates, Mr. Powell appears to be adopting a policy of “risk management” to help avoid derailing the lengthy economic expansion.

Gold’s role in portfolios should not just be reactive

While many view gold as an opportunistic “trade,” investors concerned about capital preservation and optimized returns should consider gold as a key portfolio element.old has been generating news and...