The economy and the virus

Not since the 1960s and ‘70s has the United States experienced social upheaval like it is experiencing today. We have protests (both peaceful and otherwise) and a massively divided political landscape. On top of that, we have a virus that is spreading across the country, creating fear and an acceptance of economic shutdowns.

Originally, the scientists said we needed 15 days to slow the spread. These same scientists have consistently lengthened the time they believe keeping the economy relatively closed is a good idea. Yet, eventually, as the number of new cases of COVID-19 slowed, people revolted against these constraints and states began to reopen. Now a pickup in new cases, which many call a “surge,” is causing politicians to reverse prior moves to reopen, and they are now reclosing bars and restaurants.

Yet, while these reclosures are happening, ordinary Americans are showing a desire to press for more freedom. On May 31, 352,947 people went through TSA airport security checks. On June 22, as reports of a surge in new cases started to appear, TSA counted 607,540 passengers. If these reports of a surge are slowing activity, we can’t see it in the TSA data. On July 5, 732,123 passengers entered airports.

Moreover, gasoline usage, which had been down about 50% from the year before at its worst back in April, is now down just 10%. And Apple mobility data, which reflects requests for directions, bottomed in April, down nearly 60% from the Jan. 13, 2020, benchmark. Since April, the mobility data has rebounded 19%.

In other words, while many seem to think that new cases and some reversals in openings will do the same kind of damage to economic activity that we saw in March and April, it does not appear that way at the moment. This is likely one of the reasons that equity markets are recovering from their “surge-related” drop. Last week [the week of June 29], in a holiday-shortened four-day trading week, the S&P 500 was up 4%.

Part of this was driven by the second straight month of job gains. The U.S. added 4.8 million jobs in June, and the unemployment rate fell to 11.1%. Over the past two months, manufacturing has recovered 606,000 of its lost jobs, and these are unlikely to be affected much by the closure of bars and restaurants.

FIGURE 1: THE ISM MANUFACTURING INDEX ROSE TO 52.6 IN JUNE 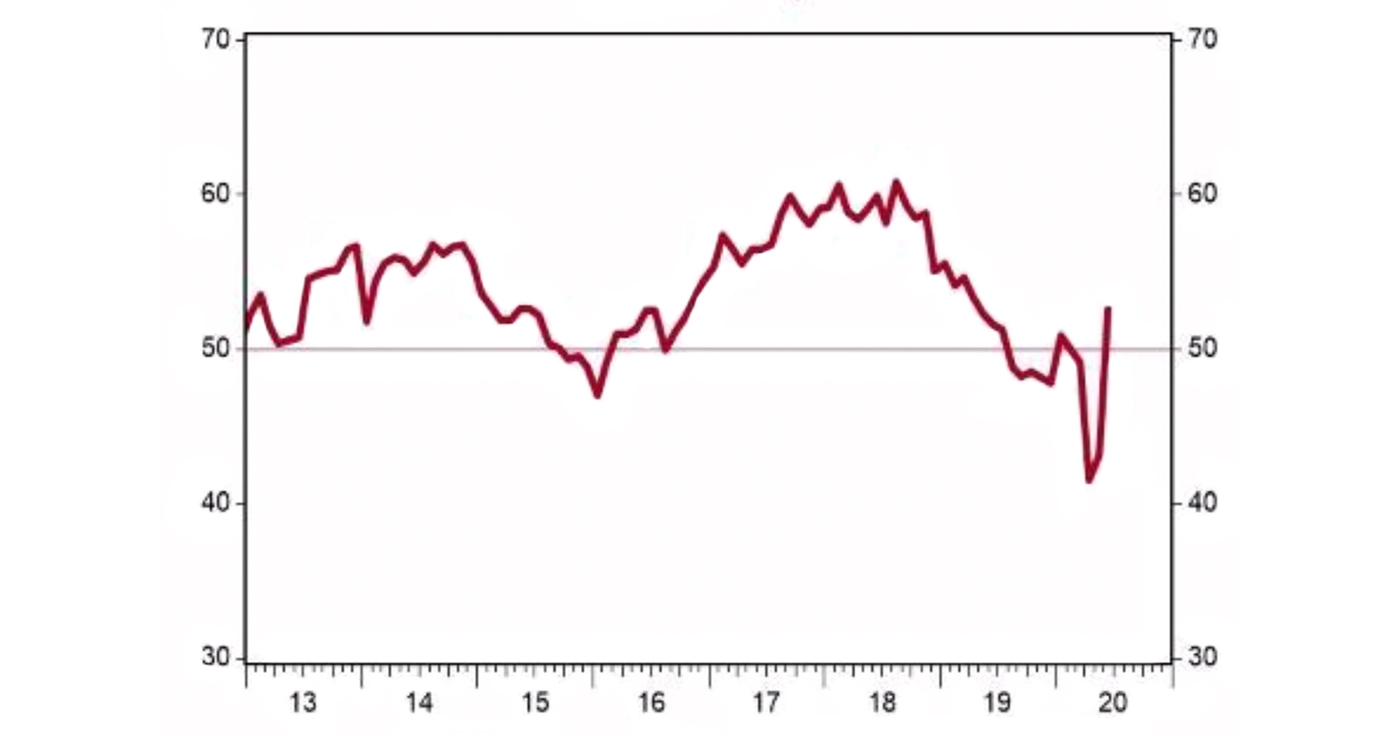 Because we put the odds of another nationwide economic shutdown very low, we expect economic data to continue to improve in the weeks and months ahead. On top of this, the M2 measure of money is up 25% in the past year, one of the fastest year-over-year rates we have ever seen. With this flood of new money, and an improvement in economic data, equity markets should continue to rise. And contrary to some views, we do not think the equity market is overvalued.

Many on both sides feel as if the world is falling apart, and we are certainly dealing with a series of issues that are causing uncertainty. However, especially after the Fourth of July, it’s important to remember history.

In the Civil War, the U.S. lost 620,000 men, 2% of the population, the equivalent of more than 6 million people today. World War I, World War II, and the Spanish Flu were devastating. Yet, in every case, the United States continued to prosper.

We are completely aware of this history and the belief of many that this time is different. But we will get back to normal. It may not happen immediately, but it will happen. Competition among states, businesses, and everyday people to grow and enjoy life will push everyone to realize that we can’t truly stop a virus. Just like 9/11, people will fly again. They already are. They will go to restaurants again—and sporting events and theaters. But it will take time.

Those expecting a complete “V-shaped” recovery for the economy will end up disappointed. These first few months will look like a V, but then things will grow more slowly unless we get a widely distributed vaccine. We may not see 4% or lower unemployment rates again until 2023. Maybe longer. Day by day, week by week, month by month, progress will be made.

We remain hopeful. We have history on our side. And we remain bullish on equities. Companies, like the rest of us, are adapting. They are figuring out how to limit losses—and grow—in this uncertain time. They, too, will emerge stronger when this storm has passed.

This is an edited version of an article first appearing at www.ftportfolios.com. This report was prepared by First Trust Advisors LP and reflects the current opinion of the authors. It is based upon sources and data believed to be accurate and reliable. Opinions and forward-looking statements expressed are subject to change without notice. This information does not constitute a solicitation or an offer to buy or sell any security.

How strongly will U.S. GDP rebound from its deep dive?

According to MarketWatch on July 30, “An economy badly battered by the coronavirus shrank at a record 32.9% annual pace in the second quarter, underscoring just how big a hole the U.S. finds itself in as it labors to recover from the deepest recession in American...