Financial advisors need to understand the key differences between the kinds of risk that you manage for clients (market risks) and risks to the advisory business model itself (RIA business risks).

We’ve all heard the saying “out of left field,” meaning “unexpected” or “surprising.” It’s an idiom from the sport of baseball, where it refers to a play in which the left fielder throws the baseball all the way to first base, or home plate, surprising the runner.

In our business, we’re used to things coming out of left field—uncertainty is the underlying reality of all markets, and it’s something we all must manage as market participants. As a financial advisor, you must understand the key differences between the kinds of risk that you manage for clients (market risks) and risks to the advisory business model itself (RIA business risks).

When things come out of left field, as they always do (and will) in markets, you are the one responsible for stepping up to the plate with sage counsel in the face of threatening uncertainty. Market risk takes many forms, and you are expected to have antidotes and answers for all of them as you design client portfolios with painstaking rigor in the face of the unexpected. That task is your responsibility, your passion, and your livelihood.

But business risk—fiduciary risk—is a separate form of risk. Fiduciary risk is that risk transferred from clients to the fiduciary that stewards their capital. Fiduciary risks are threats to the RIA entity itself. The most significant and severe form this can take is a lawsuit from a client claiming that there has been a breach of fiduciary duty.

Fiduciary risk can be correlated to the market environment

Many people believe that the greatest drivers of fiduciary risks are mistakes made by advisors themselves, or by defects in process or practice.

In fact, fiduciary risk is much more closely correlated with the market environment than errors or negligence. There is a lot of data on this (we know because Box Professional Insurance—BPI—has been tracking it for years), and the data is indisputable.

What it indelibly illustrates is that there is a clear and direct inverse correlation between the performance of equity markets and the number of lawsuits for breach of fiduciary duty. These lawsuits spike when the market becomes corrective and subside when it is tranquil.

This was readily apparent during the market turmoil that surfaced during the first quarter of 2020. As the S&P 500 and other major U.S. indexes went into the fastest bear market in history, “Breach of Fiduciary Duty” claims, as compiled by FINRA, began to move higher in February. We would expect a spike in total claims for all of 2020 and beyond, similar to those seen in 2002–2005 and 2008–2011.

In our tracking at BPI, we’ve seen roughly a threefold increase in claims volume from February to March. That’s anecdotal, until it’s not. We can say with a high degree of conviction that the number of severe complaint claims is likely to move much higher, and stay higher for a lengthy period of time. 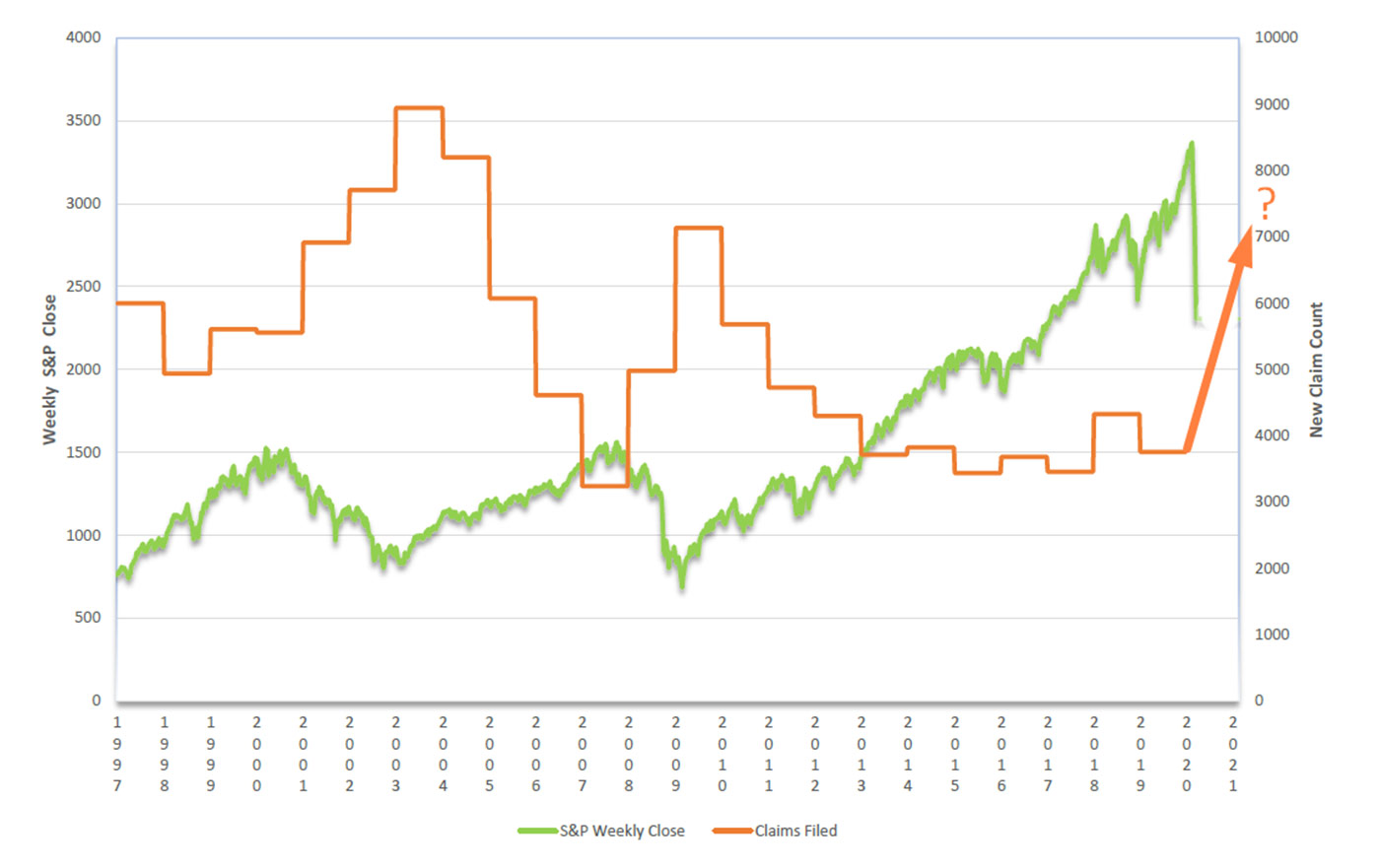 The interesting thing about this relationship (inverse correlation) from a fiduciary risk perspective is that it is independent of the quality of the advice you give clients every day. In other words, it is likely a given for competent advisors that they know how clients’ portfolios should perform in an adverse market environment.

The question becomes, how can you make sure your business will thrive in an adverse market environment?

Highlighting the differences between advisors

Speaking broadly, we could divide money managers into two camps. The first, and more traditional camp, is positioned opportunistically for an appreciation of the major asset classes (primarily equities) and must thoughtfully “endure” volatility events on the path to these rewards.

The second, and more tactical camp, takes some version of the inverse stance—positioned opportunistically for a volatility event but prepared to underperform the market in the event of a slow, stubborn grind up. If you are one of these managers, volatility is your opportunity to shine while others are fearful.

The salient question for the first camp is obvious: What is your plan for the kinds of volatility events we can almost certainly expect from a late-stage bull market? If a volatility event will be a setback (and it stands to be a setback if you have participated in the last two years’ gains), then the question is how will you protect the last two years’ gains? How do you keep them?

The question for the latter camp is subtler but just as salient: If you are or have been positioned for a volatility event, and you stand to benefit from it, that’s great; but how did you navigate 2019 and other big up years in this bull market? And now, what is your plan moving forward?

Here is perhaps the most important thing to know about the source of fiduciary risk with your clients: Capital is not the only casualty of a drawdown—communication suffers too.

This is a reality of behavioral finance that is too frequently overlooked. Client communication is often the first casualty of a pressurized financial reality, such as volatility, underperformance, or a drawdown. Communication warps under the pressure and urgency of threats, and assumptions that seemed foundational are questioned. The weakest links of your clients’ understanding of your roles and responsibilities will be tested in these situations, and these communication breakdowns and misunderstandings can take many forms.

Interestingly, one of the most frequent forms they take isn’t a client claiming their advisor is guilty of some gross negligence—rather, it’s something subtler, such as that they were underprepared for opportunity, or failed to capture gains or avoid turbulence in the market. Perhaps a third party, someone the advisor doesn’t know and can’t communicate with, is whispering in the client’s ear that they received bad advice or that an opportunity was squandered. Indeed, FINRA has identified 15 different categories of investor complaints.

See Related Article: Survive and thrive in the next bear market

In summary, breach of fiduciary claims are usually infrequent, but the consequences can be severe. These claims are often tied to the overall market environment (specifically volatility) and not the quality of the financial advisor’s advice or stewardship of client assets.

As a financial advisor, you have a plan for market risk, and that risk management drives every portfolio and plan you design for your clients. But how do you manage fiduciary business risks? With the same discipline and rigor? How confident are you in your firm’s client practices, compliance process, reporting, cybersecurity, and overall practice risk management?

Things come out of left field. Your clients’ portfolios are built to handle them.

The opinions expressed in this article are those of the author and do not necessarily represent the views of Proactive Advisor Magazine. These opinions are presented for educational purposes only. Box Professional Insurance makes no representations of any kind regarding coverage or the specifics of any policy or claim. See your insurance carrier and policy for details on coverage, exclusions, and limits. The information presented here is for illustrative purposes and may not reflect the terms of any particular insurance policies nor the coverage of any specific claims.

ith the U.S. debt continuing to spike higher and set records, the U.S. dollar is declining, losing more than 10% of its value since March. The Federal Reserve has reduced interest rates effectively to zero...