“The Citigroup Economic Surprise Index is off the charts, and while this kind of ramp in upside economic surprise cannot continue forever, increases to the current level of reports relative to expectations typically happen in the early stages of a post-recession recovery [Figure 1].”
FIGURE 1: CITIGROUP ECONOMIC SURPRISE INDEX STILL RAMPING 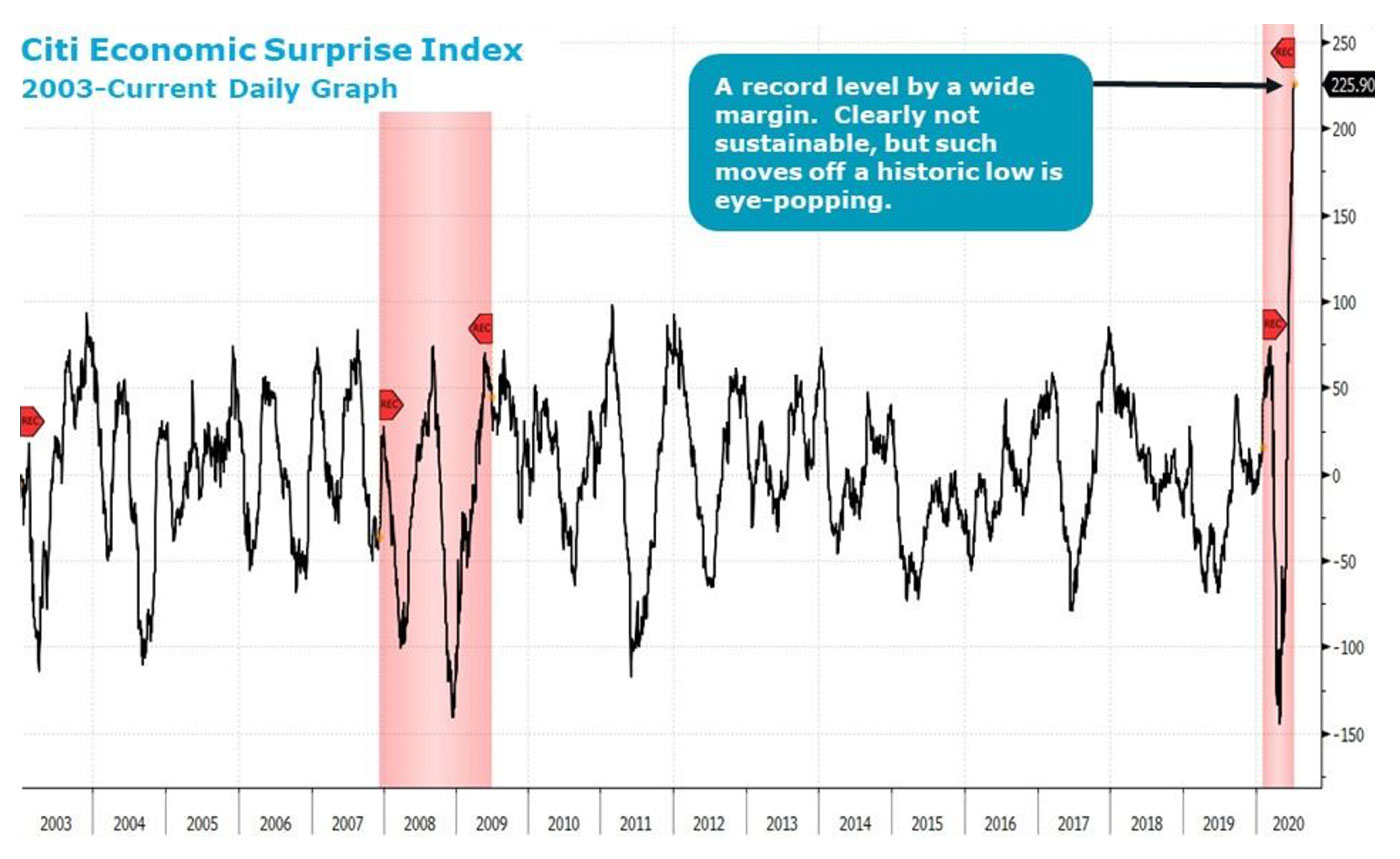 “The Organization for Economic Cooperation and Development (OECD) is an association that measures economic activity in 37 nations in the Americas, Europe, and the Pacific since 1961, and represents 80% of world trade and investment. The percentage of OECD economies with positive Composite Leading Indicators (CLI) tested the 2009 low in the heart of the pandemic, and now are showing signs of a sustained bottom and likely recovery.”

U.S. equity markets have recently seemed to be in enthusiastic agreement with this assessment. The S&P 500 briefly entered positive territory for the year on Monday, July 13, before a significant intraday reversal.

Have consumer attitudes improved along with economic data and the equity markets?

Several sources provide some insight into this issue.

The New York Times Dealbook reported this week that the surge of the past few weeks in U.S. coronavirus cases, and challenges in testing and procuring medical equipment, may help stall the economic comeback, adding,

“Morgan Stanley economists worry that the U.S. could start shedding jobs, while Bank of America warned that the V-shaped phase of the recovery has given way to a slower ‘healing phase.’ Consumers are anxious. A YouGov survey found over a third of Americans would save an unexpected windfall rather than spend it [Figure 3].”

FIGURE 3: WHAT WOULD YOU DO WITH AN UNEXPECTED WINDFALL?

The same YouGov survey found that while most Americans see their financial situation about the same as a month ago, more people see deterioration in their personal financial outlook than those seeing improvement.

FIGURE 4: HOW HAS YOUR FINANCIAL SITUATION CHANGED VS. LAST MONTH?

The final June measurement of the University of Michigan’s index of consumer sentiment shows the impact of regional spikes in coronavirus cases, with the Northeast continuing to rebound and other areas (especially the South) flattening out. (Note: The survey research was conducted before July’s continued surge in cases.) 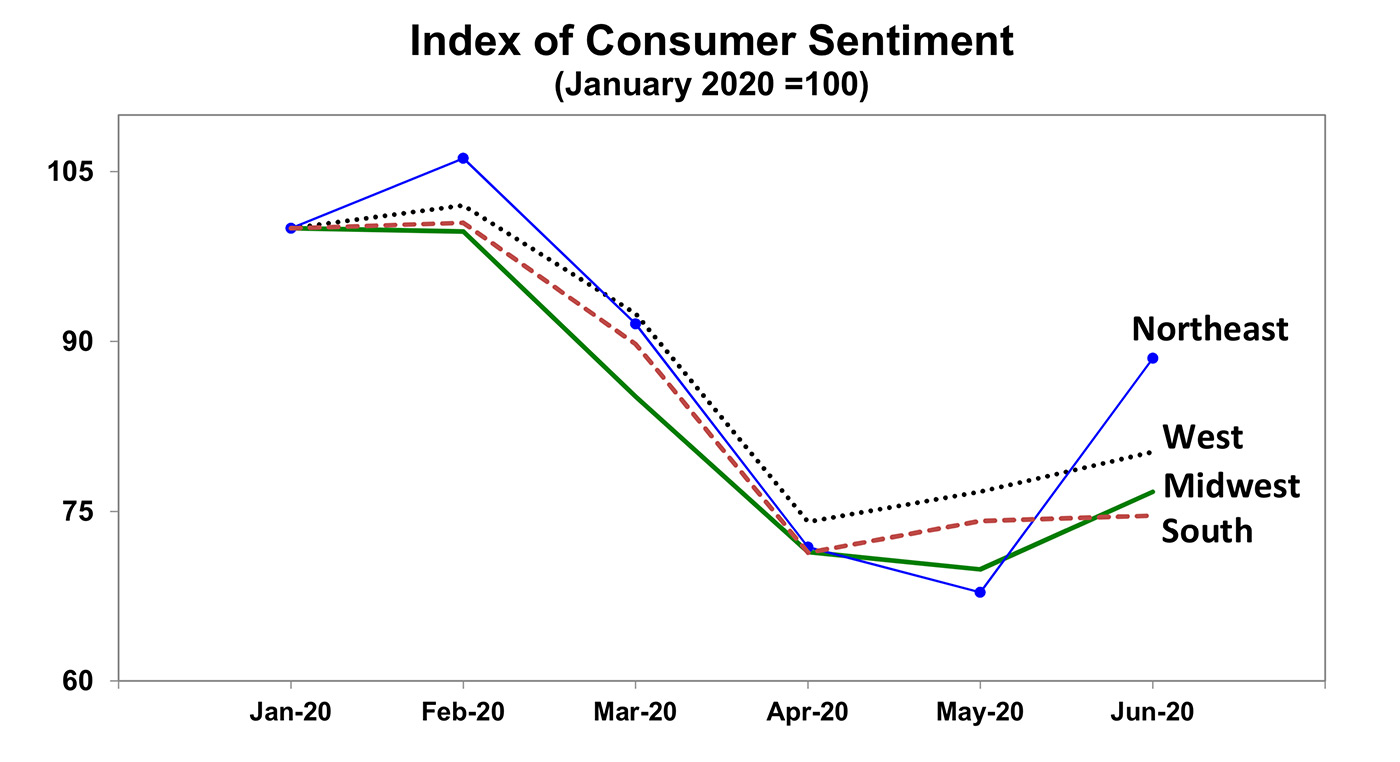 Richard Curtin, chief economist for the University of Michigan’s Surveys of Consumers, reported,

“Consumer sentiment slipped in the last half of June, although it still recorded its second monthly gain over the April low. While most consumers believe that economic conditions could hardly worsen from the recent shutdown of the national economy, prospective growth in the economy is more closely tied to progress against the coronavirus. The early reopening of the economy has undoubtedly restored jobs and incomes, but it has come at the probable cost of an uptick in the spread of the virus.

“The resurgence of the virus will be accompanied by weaker consumer demand among residents of the Southern and Western regions and may even temper the reactions of consumers in the Northeast. As a result, the need for additional fiscal policies to relieve financial hardships has risen. Unfortunately, confidence in government economic policies has fallen in the June survey to its lowest level since Trump entered office. The need for new relief programs is urgent and would best be accomplished before the national elections dominate the debate.”

The market has already rallied sharply off the lows from earlier this year, but history shows that more gains—maybe another 20% or 30% or more—may be on the horizon.Is the recession over?It became apparent in early June after the release of the April GDP numbers that...