When we invest, we can’t know the future or get a do-over. Dynamic, risk-managed strategies can help client portfolios be more responsive to changing market environments.

Investors are so different. They pursue different goals. They react differently to changes in the financial marketplace. Some are aggressive. Some are conservative. Sometimes they are terribly concerned with risk, and other times they seem able to totally ignore it.

This suggests that most investors really don’t understand what risk is all about.

After almost 50 years of researching the financial markets, operating one of the early hedge funds, and then running a multibillion-dollar turnkey asset management program (TAMP) for the last 36 years, I’ve formulated some thoughts on risk that I’d like to share.

First, you have to understand why risk exists. The simple answer? Because we can’t know the future or go back for a do-over.

If we knew the future, there would be no risk. Our foreknowledge would prevent us from encountering any bad events.

Similarly, if once we encountered misfortune we could retrace our steps and avoid the adversity, we could live life risk-free.

As some before me have noted, if we could live life looking in the rearview mirror, instead of through life’s windshield, we could always achieve happiness.

But life does not accommodate us. Try as we might, we find that we cannot study, work, or research our way to a place without risk. Having friends in high places or trying to avoid people in low places won’t guarantee an existence without peril. Nor will simply ignoring the threat of danger allow us to sidestep it. As I have written before, risk is always with us.

I spent a good amount of time recently in a very small workshop with Nassim Taleb, author of many of my favorite books on risk (“Fooled by Randomness,” “The Black Swan,” and “Antifragile”). It was an awesome workshop that helped me refocus on the reasons for risk management.

In the latter two books, Nassim describes “The Turkey Problem”:

For a thousand days, the butcher feeds the turkey. With each passing day, as he steadily grows in size, the turkey becomes more convinced of the butcher’s benevolence and the probability of an ever-brighter future. Then the day before Thanksgiving (or, as is the case in a few weeks, Christmas) arrives, and the turkey gets a surprise. 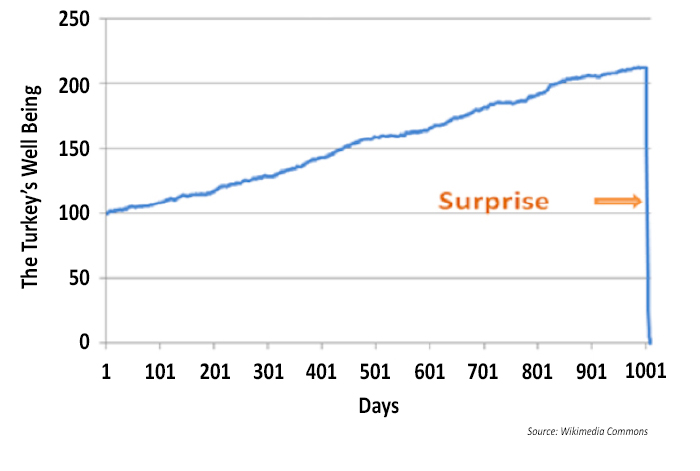 The poor turkey falls prey to an issue that we all have to deal with in our daily lives. Humans have necessarily evolved into creatures that survive by taking a few events and generalizing them into a prediction of the future that they think they can reliably act upon.

We touch a stove and are burned, so we don’t touch a hot stove again. A forecaster examines a stream of earnings reports that looks like the turkey’s first 1,000 days and predicts that the next quarter will be even better.

While such “inductive” reasoning serves us in many tasks, it does a very bad job of preparing us for surprises to come. Like the turkey on the day before the holiday feast, the surprise comes abruptly, and the result can be shocking. One can learn overnight that the hand that feeds you can literally be the one that also wrings your neck.

Our investment goal should be to avoid being the turkey.

Most people seem to believe that they can recognize risk. And there are risks that you can see a mile away. You know the risk of crossing a street or stopping on a railroad crossing.

The advice of one of the owners of a market-timing firm we acquired still rings in my ears. At every seminar on timing he would ask, “If you’re standing on the railroad tracks and a train is approaching, what should you do?” Of course, the answer is “get off the tracks!”

Yet, most truly scary risk, in and out of the financial markets, is not dealt with so simply. And, as if to provide the exception to even these elementary examples, it seems like every day we read of someone getting killed simply crossing a street or a railroad crossing!

Our variable sense of investment risk

Why is risk important to us sometimes and not at other times? Some attribute this to a status quo bias. The evolutionary wiring of the human brain causes us to unconsciously assume the continuation of the status quo.

For example, say we just spent two years in a short-term depression, during which stock market indexes fell 50% to 70%. Status quo bias would cause investors to feel the stock market is too risky to buy into, and they would continue to feel that way for years afterward, regardless of the return potential.

On the other hand, after an eight-year bull market, it would be harder to find people who say that stocks are too risky to invest in.

In such times, the focus is not on risk but on return. Sound familiar?

Another bias working against a realistic view of risk is the familiarity bias. We encounter this bias every day. We buy popular brands. Why? Because they are familiar, they are talked about, and they are trusted.

So when the stock market commentators say it’s a bull or a bear market, it becomes acceptable and we act accordingly, giving little thought to the less popular alternative.

Taleb has written in his books of “silent risk.”

Risk is often silent. By its nature, the existence of risk is not realized until it is too late. Taleb compares it to sending troops out to the battlefield after the battle is lost.

And just as we are late to recognize risk, it is impossible to measure the extent of the risk until after it has occurred. Like those caught in the path of a hurricane, we are simply left to pick up the pieces and deal with the resulting damage.

Financial risk is not predictable, but …

We know from studying history that stock market crashes follow the business cycle and occur rather routinely. When they will occur, however, is not knowable in advance. It may be just a couple of years after it last occurred, or it could be more than a decade afterward.

It has been 10 years since the market topped out in 2007, preceding a 50%–70% downturn that took a year and a half to recover from. The rally that ensued afterward continues today, the second-longest in stock market history.

Using this knowledge of the certainty of a bear market does not eliminate risk, nor does it enable you to circle on a calendar when it will surface. But realizing that risk is always with us and preparing for it can mitigate the damages when risk inevitably surfaces.

How can we avoid being the turkey in investing? We all rely on the past to help us cope with the future. But most of us rely too much on the recent past. We need to use more data.

Stock market strategies should not be based on the last five years, for example. It’s been a bull market for most of that period. Any strategy that’s worth its salt must be tested through at least a full cycle of rising and falling markets. Better yet, strategies should be tested through the two bull and bear cycles stretching back to the 1990s at the very least. The turkey did not know what was coming, but the butcher with a larger perspective did.

And even when we have a lot of data, the skeptic in me believes it is never quite enough. After all, the turkey had a lifetime of data!

How have we been able to mitigate investor losses during more than three decades of downturns?

Our success has been based on three core offerings:

In investing, the status quo is overvalued

In such times, the unpredictability of financial markets is undervalued, and the status quo is overvalued. Although we can’t know when a true bear market will surface, history tells us we will be exposed to that risk.

Remember, you are creating client portfolios for what lies ahead. When you do that, the risk you are preparing for is not in the past. Like with the turkey, the real risk is in the future. Since risk is always with us, doesn’t it make sense that investors should always have dynamic, risk-managed strategies in their portfolios?