Bespoke Investment Group said gold’s early move higher on Feb. 24, was the “first gap up of 2% or more since November 9th, 2016: the day after the 2016 presidential election.” 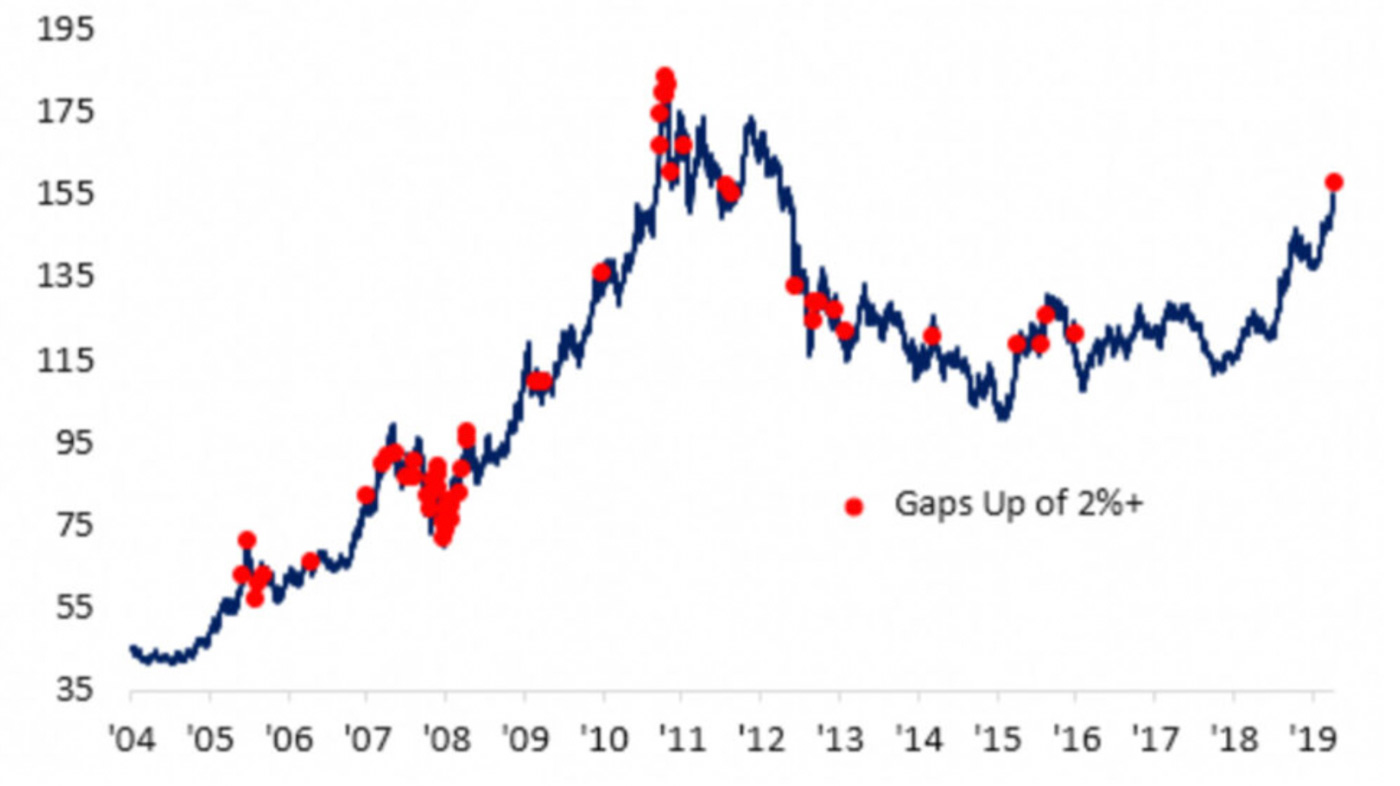 Something interesting then happened for the price of gold for the rest of the week.

Gold gave up much of its 2.5% intraday gain on Feb. 24, ending that Monday with an increase of just under 1%.

The rest of last week was volatile for all asset classes, and GLD, surprisingly, put in a weekly decline of almost 4%. Of course, this was far less than the double-digit losses seen by the major market indexes, with the Dow Industrial falling 12.4% (more than 3,500 points), ending its worst month since 2009. It was the fastest decline into correction territory from a record close in history, according to Dow Jones market data.

Many investors were probably asking, “What happened to gold’s ‘safe haven’ status?”

Several explanations have been put forward:

1. As seen during the last financial crisis, gold does not always have a short-term negative correlation to the equity markets. Indiscriminate market selling can hit all asset classes at the same time, especially during times of rapidly spiking volatility (as measured by the VIX), and heavy trading volumes.

“The Cboe Volatility Index has risen from 14 just a week ago to above 48 as of Friday morning. The index—derived from pricing data for options on the S&P 500 index—measures the market’s expectations for volatility over the next 30 days. The surge brought the VIX to the highest level since the 2008-09 financial crisis, surpassing levels reached during the market selloffs in 2011 and 2015, as well as both corrections in 2018.”

2. There was a good amount of media commentary that margin calls were widespread last week, forcing investors to liquidate holdings across the board.

“Investors are selling anything with a bid and running for cover, and that includes typical hedges like gold. … Gold’s being buffeted by waves of selling, likely from equity traders getting market calls and needing to raise cash. …”

3. There was also speculation that the lowered outlook for global GDP growth due to the fallout from COVID-19, especially in China, may impact both industrial and consumer demand for gold in the short and intermediate term.

MarketWatch added an interesting, though lamentable, sidebar to this side of the story:

“Likely adding to pressure on gold prices: ‘Physical transaction in China and India are typically conducted face to face, and we anticipate that these transactions are going to plummet as the coronavirus crisis plays out,’ said Peter Grant, vice president of precious metals at Zaner Metals, adding that these two countries account for about 1,000 metric tons of demand annually.”

4. Gold’s worst day last week was on Friday, Feb. 28, and the selling picked up heavily into the close as news was breaking that Fed chair Jerome Powell gave indications that the Fed might be shortly entertaining unanticipated interest-rate cuts. This was somewhat surprising, as lower interest rates should theoretically support gold prices.

“‘The fundamentals of the U.S. economy remain strong,’ Powell said in a statement released as stocks headed for their worst week since the financial crisis. ‘However, the coronavirus poses evolving risks to economic activity. The Federal Reserve is closely monitoring developments and their implications for the economic outlook. We will use our tools and act as appropriate to support the economy.’”

Although there were still losses on the Dow and S&P 500 on Friday, equity markets came back into the market close, and GLD ended the day with about a 4% loss.

With widespread anticipation that there may be a significant response coming shortly by central banks around the world, the outlook for gold should be positive.

This is especially true if falling interest rates end up resulting in negative real returns for Treasurys, says a white paper by Flexible Plan Investments:

“One of the most important benchmarks for investor returns is the ‘real’ 10-year yield, or the current total return of a 10-year Treasury bond minus the expected rate of inflation. … Gold is the best performing of all major asset classes, delivering nearly 35% annualized returns when real Treasury rates are negative. With the exception of commodities, the other asset classes are either negative or slightly positive.”

Note: Data covers 1973–12/31/2018. Definition: When the current total return of a 10-year Treasury bond minus the expected rate of inflation is less than zero.

“The weeks ahead will show the Fed beholden to the whims of Wall Street once again, as the U.S. stock market will eventually throw a temper tantrum if another rate cut isn’t forthcoming. The bottom line is that not just the U.S. but the entire developed world is in an easing trend, and the resulting ultra-low-rate environment, along with expanding negative interest rate bonds, will be extremely bullish for gold and silver.”

The market action on Monday, March 2, with both equities and gold rallying strongly, would seem to affirm Mr. Lundlin’s outlook and the faith in actions by central banks to help to stabilize markets over the short term. But the market will likely respond more to actual progress (or a lack thereof) in minimizing the impact of COVID-19 than it will to monetary policy.

The 2020 bear market has come on faster than any other bear in history. There was no back and forth at the top. The market went straight down. SPX (S&P 500) is down more than 20%, and, through March 17, there have not been two consecutive up days since the selling...