“China is the biggest driver of global growth so this [coronavirus] couldn’t have started in a worse place,” said Alec Young, managing director of global markets research at FTSE Russell, to CNBC at the end of January. “Markets hate uncertainty, and the coronavirus is the ultimate uncertainty in that no one knows how badly it will impact the global economy.”

The market had run up almost 15% from the October lows through late January without even one day of a 1% decline. However, fear over the spreading coronavirus caught up with investors, resulting in a 1.8% decline in the S&P 500 and a 600-point drop in the Dow on the last trading day of January. That was enough to push January 2020 into the negative column for both the S&P 500 and the Dow.

‘As January goes, so goes the year’

Devised by Yale Hirsch in 1972, the January Barometer states that broad index returns in January are likely to reflect the direction of the market for the full year. It has an accuracy rate of 85% for predicting the outcome for the year, going back to 1950, according to the 2020 Stock Trader’s Almanac.

Should investors be worried?

Not necessarily. When you separate out the negative January years between long-term secular bull and secular bear markets, the picture changes dramatically. Eighty percent of the time, down Januarys in secular bull markets have been followed by gains over the following 11 months—many times substantial gains.

AS JANUARY GOES, SO GOES THE YEAR? ONLY IN SECULAR BEAR MARKETS 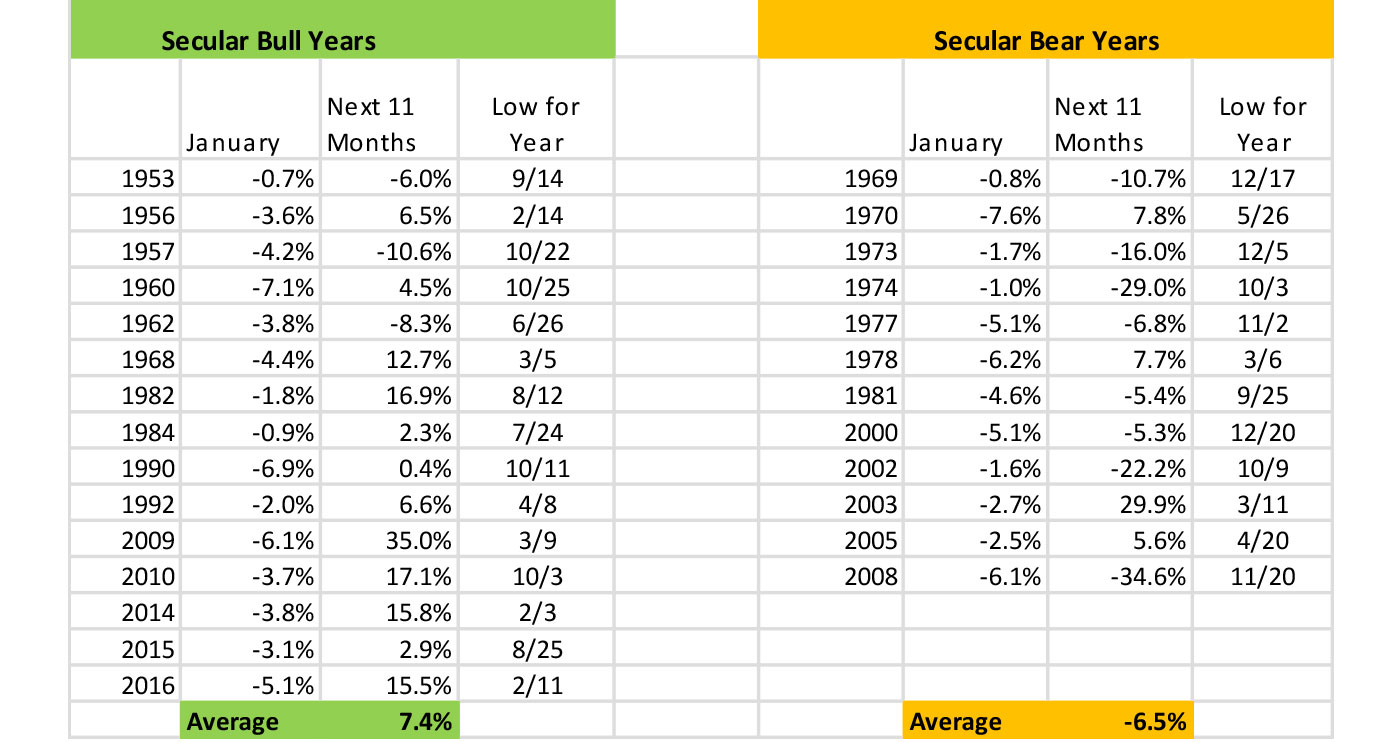 But the outlook for the balance of 2020 gets even brighter.

Within the secular bull years column, three years had recessions that began during the years 1953, 1957, and 1990. Considering that the market leads recessions, and assuming the U.S. does not go into recession in 2020, then the probability of the next 11 months showing gains rises to 92%, with an average gain of 10.6%. That type of performance would mean a year-end target of 3,570 for the S&P 500. Further, the low for the year occurs 42% of the time in the first quarter (2009 is excluded as the recession began in 2007 and was finished by June 2009).

But to temper optimism, unfortunately, market volatility rises in years with a down January.

When might the low occur? In years with a down January in a secular bull, 33% of the time the low occurred in the first quarter, 13% of the time in the second quarter, and 27% in the third or fourth quarters. Keep in mind that 2020 is an election year, a time when markets tend to be edgy. In the last presidential-election year, 2016, the market had a down January and finished the year higher, but most of the gains were packed into the final two months of the year. Despite the potential for increased volatility (and absent a recession), the market has strongly tended to finish double-digits above its January close in secular bull markets that have a down January. This tells us that any dip over the next several months is probably a buying opportunity.
The opinions expressed in this article are those of the author and do not necessarily represent the views of Proactive Advisor Magazine. These opinions are presented for educational purposes only.